German Film Office
And the Oscar goes to…

What’s the mission of the German Film Office?

Sara Stevenson: The German Film Office is a new initiative of German Films and the Goethe-Institut, based in New York. Our mission is to promote films from Germany in New York and the United States and to strengthen their presence in art house cinemas, cultural and educational institutions and on digital platforms.

How did the collaboration between the two partners, German Films and Goethe-Institut, come about? 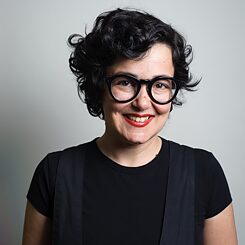 Sara Stevenson | Photo (detail): © Jacobia Dahm Sara Stevenson: The Goethe-Institut and German Films have been talking for some time about how our two institutions could collaborate more closely. German Films has a strong interest in the American market, one of the most important markets worldwide not only because of its size but also because it sets the tone internationally with Hollywood and the major streaming platforms. The Goethe-Institut offers its expertise in the curation of film programmes and also a long-standing collaboration with important local partners. At the same time, it can benefit from the access that German Films has to the latest films and from its close relationships with the film industry. With our film package “KINO! Germany NOW!”, which we launched at the end of January, the Goethe-Instituts in the USA were able to show a highly topical selection of films in collaboration with their cinema partners. This wouldn’t otherwise have been possible. With film series like “Comes the Revolution: The Berlinale Forum at 50” we emphasise other content that is important to the Goethe-Institut.

What is the German Film Office doing during the pandemic?

Sara Stevenson: We’ve only existed during the pandemic because we started working in October 2020 when the New York cinemas had already been closed for over six months. That’s why our programme has been almost exclusively online. This is sad, because there are so many wonderful cinemas in New York and the US. But at the same time, in the midst of the pandemic we’ve been able to reach new audiences with our free digital offerings. And at least there was one physical event: We opened the German Film Office with a drive-in screening of the film “Exile” by Visar Morina in collaboration with Rooftop Films. It was a really beautiful evening in Brooklyn, against the backdrop of New York harbour.

How do things look now?

Sara Stevenson: The cinemas are gradually reopening, with a limited capacity of 25 per cent at the moment. I actually went to a cinema again today for the first time, at 12:30 noon, which has always been my favourite time to go to the movies. In addition, the drive-in theatres are back in business after a long winter and the outdoor cinemas are also planning to reopen this summer. In June, the Tribeca Film Festival will be the first American festival to be held exclusively physically and outdoors.

Where do you see thematic links for film work between Germany and the USA?

Sara Stevenson: Many topics that are discussed in Germany and the USA are also of interest in the other country: The spectrum ranges from social emancipation to criticism of capitalism or artificial intelligence to dealing with one’s own history. With the film programmes we show in the USA, we tie in with current discussions and introduce perspectives from Germany, for example, in the form of curated film series as part of Goethe-Institut projects, such as the latest film series „Ours to Heal“.

Which recent film from Germany should Americans be sure not to miss?

Sara Stevenson: Probably the latest is I “Am Your Man” by Maria Schrader, which was shown at the Berlinale and already has an American distributor – a romantic comedy for the twenty-first century. Julia von Heinz’s new film, “And Tomorrow the Entire World”, will also be on Netflix here in the USA from May. Its mass appeal makes it a rare, important film about left-wing resistance.

Your prediction: Which are we more likely to see, a German Oscar winner or an American Berlinale winner?

Sara Stevenson: That’s a tough question. I think it’s more likely that we’ll see a German Oscar winner, not least because of the high number of German co-productions that come onto the market every year. I would be happy if next year, for example, Dominik Graf is at least nominated with “Fabian: Going to the Dogs”, a great period film. But I can also imagine an American winner of the Berlinale, because fantastic independent films are still being made here in the USA. My favourite was most recently “The Forty-Year-Old Version” by Radha Blank, which won Best Director at the Sundance Film Festival in 2020.

The German Film Office is an initiative of German Films and the Goethe-Institut with the aim of promoting films from Germany in New York and the USA and strengthening their presence in art house cinemas, cultural and educational institutions and on digital platforms.