“Voice Versa– Two Languages, One Story”. A podcast by Deutschlandfunk Kultur and the Goethe-Institut. | Illustration(detail): © Deutschlandradio

In “Voice Versa”, a podcast by Deutschlandfunk Kultur and the Goethe-Institut, ten authors tell stories from multilingual German society. Among them are Rana Rezaei and Sara Hoshyari. “The Latest at Goethe” spoke with them about the next episode.

On “Voice Versa”, it’s all about Germany’s multilingual reality. What is this reality for you personally? 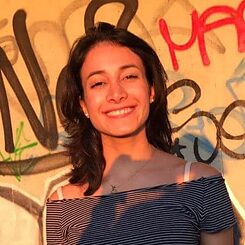 Rana Rezaei | Photo (detail): © Yeliz Kiremitci Rana Rezaei: German and Farsi, or Persian, are my native languages, which I also speak every day. In my family, we sometimes talk in one language and sometimes in the other – it’s fun because for some words in German there’s no expression in Farsi and vice versa! Apart from that, I speak English and practice Spanish and French.
Sara Hoshyari: For me, German, Farsi and English are very much part of everyday life. Since I only speak Farsi in certain contexts, I started a language tandem last year to expand my vocabulary and stay more in practice.

Your next podcast episode that starts 3 May is titled “Torshi – Secret recipe with salt and vinegar.” What’s it about exactly?

Rana Rezaei/Sara Hoshyari: Our episodes are about secrets; a topic that, by definition, isn’t spoken about much. Nevertheless, we hear about little and big secrets from different perspectives. From Nilo, for instance, who only learned about her grandmother’s death a few days afterward via Instagram.

Your work centres on the question of whether there are typical Iranian family secrets. Have you already found an answer to that? 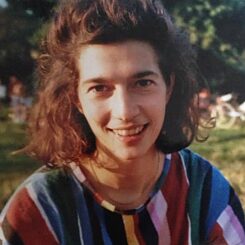 Sara Hoshyari | Photo (detail): © Paulina Metzscher Rana Rezaei/Sara Hoshyari: Not yet. At first, we thought that there were specifically Iranian kinds of family secrets, but the more we talked to people about it, the more we realised that it’s not quite so clear-cut. We also heard from people with Turkish, Russian or Mexican backgrounds who knew similar secrets and immediately understood what it was about.


Who would you recommend “Voice Versa” to?

Rana Rezaei/Sara Hoshyari: Everyone! It’s a format that’s really worth listening to that can be an enrichment for everyone.
The topics we cover are universally accessible, even if they’re sometimes attached to the most minor situations. Those who are multilingual will see themselves reflected in many places in this format; and those who aren’t will learn a lot of new things. A win-win situation for all!

“Voice Versa – Two Languages, One Story” is produced by Deutschlandfunk Kultur in cooperation with the Goethe-Institut.