"Invisible Inventories", a series of exhibitions coordinated by the Goethe-Institut, is based on a research project to record Kenyan cultural objects in museums of the Western world. George Juma Ondeng' from the National Museums of Kenya talks to "The Latest at Goethe" about well-founded provenance research and the emotionally charged restitution debate.

The "Invisible Inventories Programme" aims to produce a research-based global inventory of Kenyan cultural objects translocated to museums in the west during the colonial period. Why is it necessary to catalogue these objects?

George Juma Ondeng’: The Kenyan public has not seen most of these objects and thus it is the aim of the “International Inventories Programme” (IIP) to make them accessible to all Kenyans. 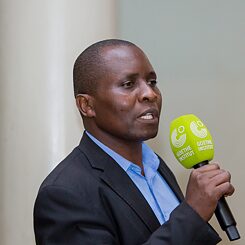 George Juma Ondeng‘ ist Experte für kulturelles Erbe und derzeit bei den National Museums of Kenya als Koordinator der öffentlichen Programme tätig. | Foto (Ausschnitt): © George Juma Ondeng‘ For this to happen, the IIP is working with cultural heritage experts in western museums and other cultural institutions holding collections originating from Kenya. It is important to mention that not every object in the database was translocated illegally from Kenya, but many of them definitely were. Back to your question: the significance of the database is immense. Cultural objects form part of the most important assets of any community; they store cultural history, they complement the intangible cultural heritage. This catalogue will help our people take stock of what their ancestors produced. We also have to recognize that some of these objects were taken away in ways that violated the human rights of their owners. Therefore, the catalogue will help Kenyan researchers and their western counterparts carry out proper provenance research that can lead to successful repatriation of illegally acquired objects to the communities of origin.

In which ways have you and other researchers from Kenya benefited from your involvement in this project?

George Juma Ondeng’: This project has created respectful and mutually beneficial partnerships between Kenyan researchers and professionals in German museums as well as those based in other countries in Europe and North America. Traditionally, and this is linked to colonial legacies and language barriers, Kenyan museum professionals tended to work mostly with colleagues from museums in the UK and the USA. From my point of view, we were able to gain new and reliable partners from Germany through this project.
The two German museums involved in this project – the Rautenstrauch-Joest-Museum (RJM) in Cologne and Weltkulturen Museum (WKM) in Frankfurt – are now our close partners and we hope the engagement will outlive the project itself.

What role, in your view, does collaborative research play in promoting dialogue between cultures?

George Juma Ondeng’: Collaborative research, I would say, has been incredibly beneficial to both parties involved. We now have information that was previously inaccessible to Kenyan scientists. Such as objects acquisition histories and original correspondence documents between the museums holding Kenyan collections and the art dealers who sold them or the donors who handed over the objects to them. By working together, we were able to get such documents translated into languages we could understand, making our work a lot easier. At the same time, our German colleagues, who previously had less knowledge about the cultural significance of the Kenyan collections in their museums, now have a better understanding of the objects, what they mean to the communities of origin, how they were made and what they were used for.

The discourse about African cultural objects held in western museums has been very emotive, particularly because there are very few tangible results to date. Which approaches would you personally propose in dealing with the subject of restitution?

George Juma Ondeng’: Restitution of African objects has largely been left to communities, whose objects were stolen, to pursue, which is in sharp contrast to how this conversation began. Talking with other African experts, it is evident that at the time most African countries were gaining political independence in the 1960s, restitution was part of the independence negotiations. Unfortunately, once freedom came, newly independent states abandoned the quest for restitution of cultural objects and began pursuing other interests. At a personal level, I strongly believe it is high time African governments took an active role in the discussions about restitution by working closely with European governments to bring back objects with known problematic acquisition histories. Secondly, because Europe has a precedent of how it treated artworks looted during the Nazi era, we don’t have to reinvent the wheel. We should use the same mechanisms to return the objects back to the communities of origin. Thirdly, since some of these objects were acquired through gross human rights violations, it is time to make their return a human rights issue so that the world moves a further step forward in the process of dealing with the atrocities western imperialism. The African Union and the United Nations should be at the forefront in calling for unconditional return of objects to Africa using the existing UNESCO Conventions.


The interview was conducted by Eliphas Nyamogo

George Juma Ondeng’ is a cultural heritage professional currently working at the National Museums of Kenya as the Coordinator of Public Programmes.

The “International Inventories Programme” is a project of the artist collectives The Nest (Kenya) and SHIFT (Germany/France), the National Museums of Kenya, the Rautenstrauch-Joest-Museum in Cologne, the Weltkulturen Museum in Frankfurt am Main and the Goethe-Institut. The exhibition project "Invisible Inventories" is funded by the German Federal Cultural Foundation.