What can be done when a Russian village has only one natural source of drinking water left? How can paper be manufactured without chopping down forests? In the Goethe-Institut Moscow’s networking project Umwelt macht Schule, teenagers successfully developed solutions for the environmental problems in their neighbourhoods. Their dedication won over the German Council for Sustainable Development.

“Young people are enthusiastic about environmental protection when they experience and understand that their own present and future are at stake. In our project, the pupils often consciously take responsibility for life at their own doorstep for the first time. And the realisation that they can stimulate change themselves and thereby change the world gives their projects particular relevance and quality,” said Anne Schönhagen, head of the Language Department at the Goethe-Institut Moscow, which initiated the project. Education for sustainable development as well as networked learning and research are the core ideas of Umwelt macht Schule: denken, forschen, handeln!

Ideas for a future worth living in

Because of water pollution, the pupils at the Kotovsk Middle School in Russia often only have drinking water from plastic bottles. Is there drinkable water somewhere else? While examining the water quality from different sources, they found that there is now only one natural source of drinking water in their village. In order to preserve it for future generations, they cleared up rubbish there, deepened the brook bed and beautified it with stones. 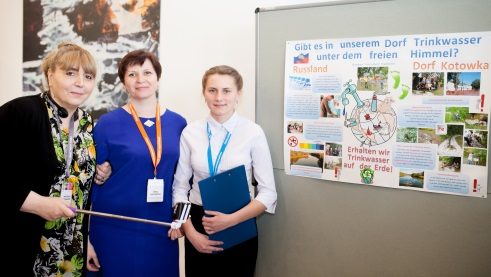 Khatuna Kapanadze, Irina Lukjanowa and Anastasija Dawydenko worked on the project about water | Photo: Anna Rafeeva At least one tree is needed to produce 54 kilograms of paper. To ensure that no more forests need to be destroyed, European School pupils in Tbilisi, Georgia looked for alternative ways of making paper. In an experiment in chemistry class, they were able to demonstrate how easily recycled paper can be produced with low energy and water consumption. 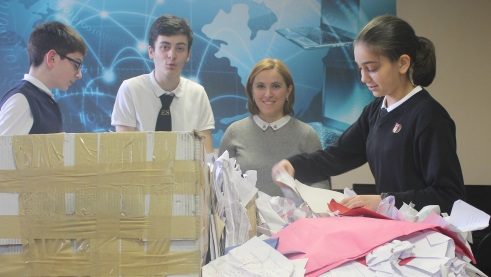 Jarji Svanishvili, Tornike Kubaneishvili, Mtvarisa Buskivadze and Elene Jokhadze work on alternatives for paper | Photo: Khatuna Kapanadze These are just two of the creative projects by young people from Eastern Europe, Central Asia and Germany. They receive support from their teachers and raise public awareness for environmental problems through targeted actions. In April, they met for an international environmental youth conference in Berlin to present their projects and discuss environmental issues across all borders.

Award presented in the presence of German Chancellor Angela Merkel

The project was awarded the 2017 Sustainability Project quality seal by the German Council for Sustainable Development. Since it is designed for the long term and the council deems it to have special potential to make the world more sustainable, Umwelt macht Schule additionally was one of four projects to be given the title “Transformation Project.”

The award was presented in Berlin on 29 May at the 17th Annual Conference of the German Council for Sustainable Development in the presence of German Chancellor Angela Merkel, Federal Environment Minister Barbara Hendricks and the Federal Ministry for Economic Cooperation and Development Gerd Müller. 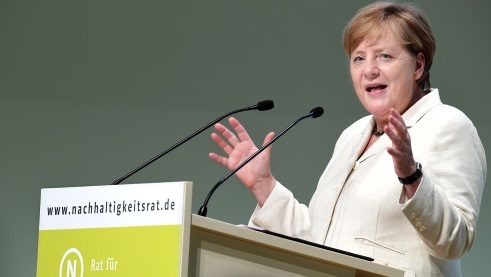 The award ceremony was followed by a speech by Federal Chancellor Angela Merkel | Photo: David Ausserhofer, German Council for Sustainable Development “Of course, we also need to have great awareness beyond the state levels that it’s a major issue and that sustainability concerns us all. For this reason, the Federal government has also increasingly involved the public in the debate about the new strategy. In future there will be regular talks between the Federal government and representatives of social organisations,” the Chancellor said. “I wish you lots of courage. Be bothersome sometimes – not too much, of course, so we don’t get petulant. We have good intentions to listen, though.”