The entrance to the new Institute | Photo: Cordula Flegel

The Goethe-Institut Munich has moved to Haidhausen, one of the city’s most popular neighbourhoods. Time to look back at 66 years of shared city history in an interview with institute director Manuela Beck.

Munich has been the location of a Goethe-Institut for more than half a century. Founded in 1951, today about 5,500 people from all over the world come to Munich every year to learn German at the Goethe-Institut. 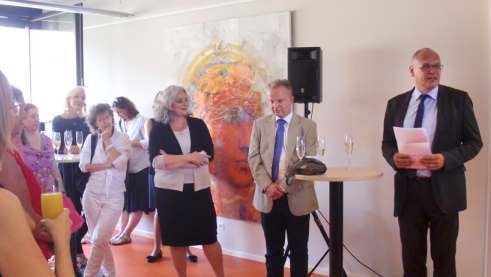 What binds the Goethe-Institut Munich to its Bavarian location?

In its beginnings during the post-war period, at that time still in the Maxvorstadt district, the Goethe-Institut wanted above all to contribute to the intellectual reconstruction in the city. The focus of its programmes was strongly influenced by domestic developments in Germany. The so-called “guest workers,” for example, who were not invited to stay in Germany for the long term, were given the opportunity to attend language courses at the Goethe-Institut in the 1970s. In addition to language acquisition, these courses also focused on everyday life in Germany. Those courses can be seen as the forerunners of today’s integration courses. Munich is one of the cities in Germany that attracts a great many specialised workers from abroad. This is also reflected in our offerings. For example, the city has many architectural offices so we offer German courses specifically tailored for architects.

Who comes to Munich to learn German?

We have increasing numbers of Chinese students and Germany’s neighbouring countries are also strongly represented. An existing partnership with Saudi Arabia also brings many young physicians to the specialised courses in Munich and to the Goethe-Institut to learn German. Overall, however, we have a very colourful mixture of people from all possible countries of origin.

Many years in Munich and multiple moves – what does the new address offer?

At our new location in Haidhausen there are many places that invite people to linger: small cafés, cultural venues and educational facilities. The latter links us with a collaboration that also benefits our language learners. It is particularly important for us to give them, mostly between the ages of 20 and 35, lively access to the city and to get them in conversation with the city. Haidhausen, a sought-after residential area that demonstrates the development of the city so beautifully, is perfect for this.

Our new premises reflect the diversification that the Goethe-Institut has undergone over the course of time with regard to its programmes. Today, we have a media library, large classrooms, rooms for small groups and a generous, comfortable lounge area. Flexible spaces like we have now are an important basis for our work: it is a constant interplay in which we respond to regional and national developments.