Obituary
“The world was his field”

With the passing of Martin Roth, the Goethe-Institut has lost a lively catalyst and an esteemed member of the General Meeting, which he belonged to since December 2015. A personal tribute by Klaus-Dieter Lehmann.

Until almost the last day of his successful life and his powerful and culturally formative work, Martin Roth remained active, combative and present. Even in late June, as a member of the Goethe-Institut’s General Meeting, he debated fervently about the future of museums. They were his life. Then, after a grave illness, death tore him from his very productive work.

As director-general of the Staatliche Kunstsammlungen Dresden and as head of the Victoria and Albert Museum, he created not only a solid foundation for convincing research, exciting, publicly effective exhibitions and new topics, but also guided the museums into the centre of society. He recognised and developed museums as political places, not to instrumentalise them, but to make a socio-political impact. For him, they were learning places, social places, places to stop on an expedition into modernity. He believed in the power of culture! 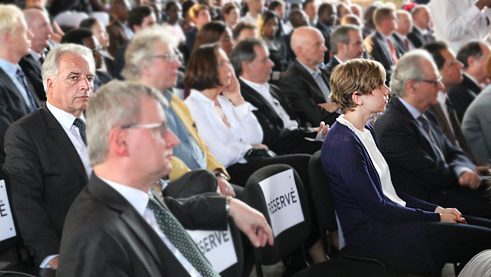 In February 2015, Martin Roth accompanied then Foreign Minister Frank-Walter Steinmeier to the opening of the Goethe-Institut Kinshasa. | Photo: Goethe-Institut Kinshasa Martin Roth was a decisive advocate for the internationalisation of museums. He did not see museums as autonomous institutions, but as intersections of worldwide dialogue and exchange. The world was his field and he contributed to it creatively. He could think big and was prepared to take risks. He thus created alliances for exchange between the great German museum complexes of Berlin, Dresden and Munich. He thus, together with the Goethe-Institut, developed exhibitions around the world in Russia, India, China and Brazil, some of them within the framework of Germany Years. He thus established a network of experts who each contributed their view of artistic interpretation to the international debate, as well as a residency programme for the Victoria and Albert Museum with the Goethe-Institut London.
In his independence of mind, his capacity for innovation and his focused interest in political topics, Martin Roth was someone who has given culture a weighty role in society’s future viability. This is his promise to us.

Klaus-Dieter Lehmann, President of the Goethe-Institut