For the third edition of the Gender Bender festival, the Goethe-Institut Bangalore asked artists from all genres to express their views of prevailing gender images and portrayals of the human body. The writer, director and actor Deepika Arwind gives us an insight into the festival that was held in early September at the Goethe-Institut / Max Mueller Bhavan in Bangalore.

In the midst of the many voices, the lively discussions about the works of art and installations exhibited, I discover a wall full of external female sex organs. They are by the illustrator Arunima Bose and are made from various materials: metal, fur, lace, sanitary napkins, clay. Each one feels different. 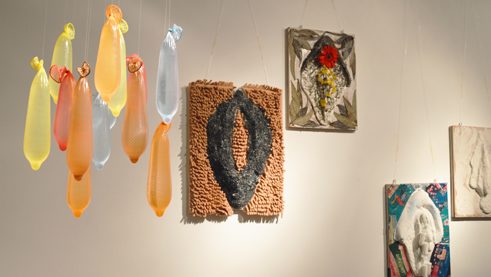 As I turn around, a few college students enter, talking loudly. They just took part in an interactive game by Fields Of View called “Made To Order,” which deals with caste and class differences and social gender. One of them says, “I am moved to tears.” The game is spectacular in its simplicity: you take on the role of a female worker in the clothing industry and grapple with her everyday problems in order to survive. It’s a game no one ever seems to win.

Two transgender women register for the game. I think about what this festival in India means. It challenges gender images and through this alone it addresses the most diverse people. It is playful, disrespectful and freely accessible to everyone. And where else will you find a foyer decorated with 27 brassieres? 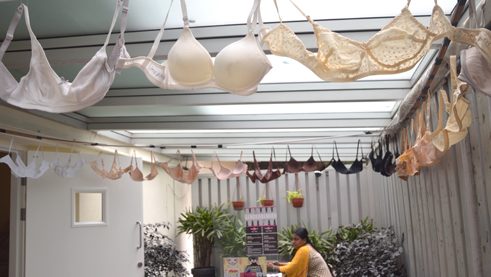 The great potential of works in progress

Gender Bender was initiated by the Sandbox Collective in Bangalore. The aim was to create a festival on the subject of gender that was process-like and open-ended. The Goethe-Institut / Max Mueller Bhavan was immediately taken by this idea. Most of the installations and performances are therefore understood as works in progress. They are unfinished, rough, but also bold and full of potential. The works by the artists, who were chosen by an independent jury, will go on tour following the festival.

One performance that fascinates me in particular is by Madhushree Basu from Chennai. It is entitled “Swachchandacharinee.” In it, Basu wears an opaque mask. In a very personal way, she explores a poem by Vayalar Ramavarama, while simultaneously showing a film and dancing.

It is amazing to see what a large and diverse audience such a festival attracts: old and young, curious, patient. On the way out, I stand for a long time in front of a partially autobiographical painting by Ibtisam Tasnim. “Al Awra: The Intimate Parts” reflects the life of the LGBTQ community in the society and culture of the Middle East. Her own life is marked by paperwork, the bureaucratic struggle for immigration status, which moves through her painting. Olive branches decorate the picture frame.

Gender Bender celebrates diversity. But I will have to come back again in order to capture and process it all, to establish connections, to allow the inspiration to reverberate. In the meantime, I find solace in the thought that one can rely on the collective openness and the imaginative power of the involved artists and the audience. And that in times when many others things appear dismal.