Persimfans Orchestra
When no one sets the tone

In the centennial year of the October Revolution, Tonhalle Düsseldorf brought the local symphony musicians together with the Persimfans Orchestra of Russia. Its unique feature is that, true to the maxims of the original Persimfans Orchestra of 1922, the musicians play without a conductor. A joint concert in Moscow in cooperation with the Goethe-Institut unites the highlights of the two Düsseldorf performances.

The two orchestras sat in a circle, communicating only through intense eye contact. Above the heads of the audience floated a red banner by the Ukrainian artist Aljoscha. The programme offered up an introduction to the global revolution, a celebration of the utopias and the avant-garde with works by Beethoven, Hindemith, Wyschnegradsky, Mossolov and even the Ursonate by Dadaist Kurt Schwitters, “Rinnzekete bee bee nnz krr müü?” The only one missing was the man with the baton. No one noticed. 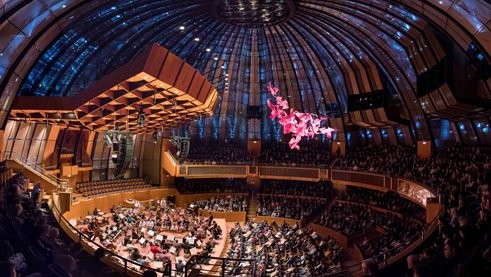 Who needs a conductor?

Persimfans is the abbreviation for Russian Pervyi Simfonicheskii Ansambl, or First Symphonic Ensemble. The original Persimfans Orchestra was founded in Moscow in 1922 as an experiment of musical collectivism, of “music free of domination.” In accordance with the ideals of the early Soviet Era, the ensemble did not want to submit to a conductor. The idea worked. “If this keeps up, conductors will have to look for a new job,” joked conductor Otto Klemperer following a perfect Persimfans performance of Tchaikovsky’s Pathétique. History has other plans. Only ten years after its founding, the orchestra was dissolved under Stalin. It was apparently too revolutionary for a state that declared the October Revolution its founding legend. 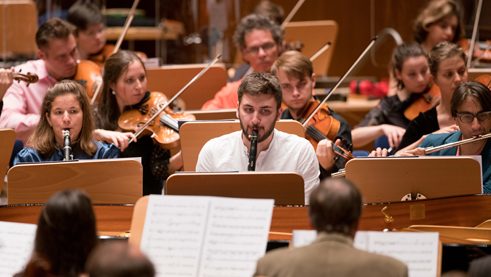 Concentration. | Photo: Ehring In 2008, the Persimfans Orchestra reconstituted in Russian in the spirit of its historic predecessor on the initiative of the pianist and sound artist Peter Aidu, a grandson of one of the original ensemble members. The musicians rehearse diligently to work out interpretations without a conductor. They play traditional and avant-garde music ranging all the way to experimental sound art. Their repertoire consists exclusively of works that were also played by the first Persimfans Orchestra.

At Düsseldorf’s Tonhalle, the Russian orchestra united with Düsseldorf Symphony musicians for two evenings to bring the utopias of the avant-garde to resounding life. It was an extraordinary collaboration. This winter, the German musicians will return the visit at Moscow’s Tchaikovsky Concert Hall. The concert on 14 December will combine the highlights of the two performances in Düsseldorf.