​It seems as if Berlin and Warsaw are worlds apart: A push to the right and judiciary reform, media censorship and demonstrations against the ban on abortions. Yet the Warsaw arts scene is one of the most creative in Europe. Radioeins broadcasted live from the Goethe-Institut Warsaw. Now the shows can be heard again on the podcast.

After São Paulo, Athens and Istanbul, this year the Goethe-Institut in cooperation with radioeins brought the “Radiobrücke” (Radio Bridge) to Warsaw. A team of eight from RBB (Radio Berlin Brandenburg) broadcasted live from the library of the Goethe-Institut Warsaw from 16 to 19 October. There were reports and interviews about media censorship, Poland’s abortion law and the Warsaw arts scene. 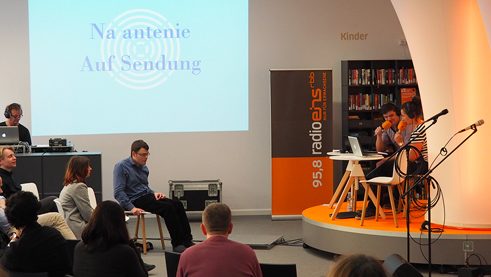 Ever since the national conservative PiS government under party leader Jarosław Kaczyński came to power, the majority of Poles worry that democracy is in peril. Nonetheless, the PiS is stronger than ever. The head of the foreign policy desk of the liberal Gazeta Wyborcza, Bartosz Wielinski, said about his work, “The risk that the democratic state could completely collapse is great and must not be suppressed.” He does not feel under pressure in his work for a private newspaper, but he notices the increasing censorship, firings and threats to colleagues from public media.

The conservative journalist Alexandra Rybinska, who writes for the PiS-affiliated weekly magazine wSieci and its news portal, contradicted him. In her interview with radioeins, she spoke about dealing with criticism and the, in her opinion, “one-sided reporting” from abroad.

While Michael Müller’s title in Berlin is merely “Governing Mayor,” in Warsaw, the term is the more ceremonious “City President” and has been held by Hanna Beata Gronkiewicz-Waltz from the Civic Platform party since 2006. Since the end of the Cold War, the city president reported, Warsaw has transformed itself from a grey city into a colourful, cosmopolitan metropolis with new underground railway lines, pedestrian zones, bridges and streets. 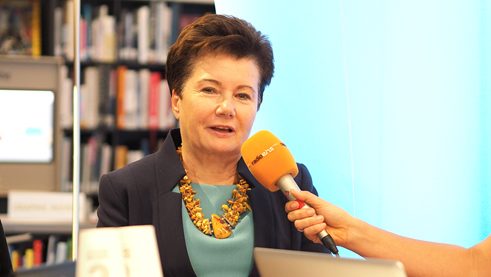 The locals call Warsaw’s largest landmark, the 137-metre-high Palace of Culture and Science, “Stalin’s Revenge.” Even the Rolling Stones performed here. Radioeins spoke with the music journalist Agnieska Wojtowicz about Poland’s diverse music scene and David Bowie’s visit in the 1970s, which inspired him to write the song “Warszawa.”

The city is proud of the native-born Warsaw composer Frédéric Chopin; so proud that it names a vodka brand after him. Reporter Anne Spohr set out in search of traces of Chopin and, among other things, discovered the musical benches that play Chopin at the push of a button in Warsaw’s Łazienki Park. 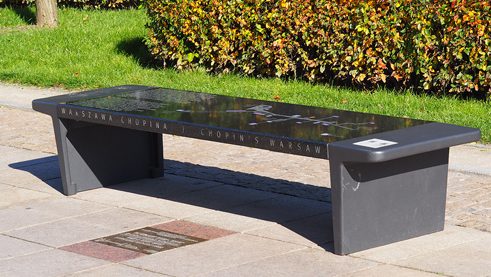 In his first novel, Kruso, which was now translated into Polish, author Lutz Seiler traces an arc from the summer of 1989 to the present-day. The island adventure follows the traces of people who were lost without a trace during their escape across the Baltic Sea to the catacombs of the Danish state police. In his interview, the author spoke about his childhood ties with Warsaw and his relationship to audiences during readings, saying, “What surprised me in particular about the novel was that there were hardly any differences in the reactions of the audiences in east and west. It’s clear that years after the end of the Cold War, readers no longer need specific knowledge about the east to understand or grapple with this book.”

“Nie pieprz Pietrze wieprza pieprzem, bo przepieprzysz wieprza pieprzem.” It looks like gibberish to a Polish amateur, but it’s a tongue twister that even native speakers find hard to pronounce and means, roughly, “Don’t pepper the piglet with pepper, Peter, or you might over-pepper the piglet with pepper”. Radioeins hosts Max Spallek and Sonja Koppitz faced this and other tricky tasks that they pull out of the “pierogi of the day,” traditional Polish filled dumplings. 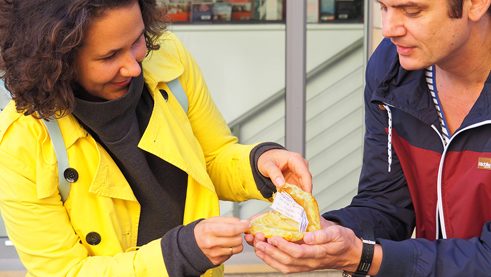 Even after the week of broadcasting in Warsaw, Radiobrücke can be streamed on radioeins.