What role can culture play in our cities, regions, societies and countries? How can the EU continue to harness our cultural heritage as a resource of the past for the future? How can local or regional developments be strengthened through culture? At the two-day European Culture Forum, the 2007 European Cultural Agenda was rethought and discussed. 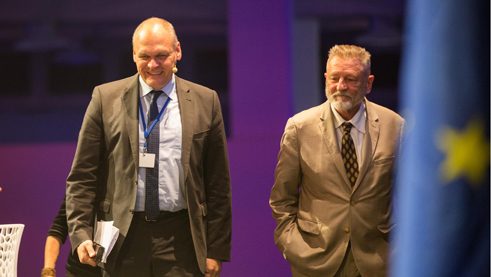 Opening of the European Year of Cultural Heritage 2018

The forum began with the official opening of the European Year of Cultural Heritage 2018 by Tibor Navracsics, the EU Commissioner for Education, Youth, Culture and Sport. Later, the President of the European Commission, Jean-Claude Juncker, offered a video message in which he underscored the importance of the common cultural heritage for European identity.

The theme of the first panel was how cultural heritage shapes contemporary life and holds societies together. Buildings, archaeological sites, but also literature, art and traditional cuisines bear witness to a common past. What European traditions and customs should be passed on to future generations? The panellists discussed how the transfer can take place democratically and across national borders.

How can culture, creativity and cultural heritage respond to global and European challenges? Katherine Watson, director of the European Cultural Foundation, Miren Arzalluz, director of the Etxepare Basque Institute, Csilla Hegedüs, president of the Transylvania Trust, and Ferdinand Richard, president of the Roberto Cimetta Foundation, discussed these issues with Johannes Ebert in the second panel. In view of the deep political divisions in Europe, Johannes Ebert noted that culture is not a national concept, but works as a transnational endeavour. Cultural cooperation between European and international partners is also very important for the refugee issue.

Culture and creativity have flourished in European cities and regions for centuries, making culture an essential element of local and regional urban development projects. The third panel discussed how creativity can act as a catalyst for cohesion in urban society. However, politicians are reluctant to approach projects of this type as they tend to focus on measurable impacts and quantitative outcomes. In contrast, there are some best practice examples such as the European Creative Hubs Network, which provides platforms and workplaces for designers, artists, musicians and architects.

The Milan forum will end on 8 December and can be followed live on the website of the European Culture Forum or in a recording on the Facebook page of Creative Europe.