Close-Up 2017
Finding Stories in the World

In 2017, twelve cultural journalists swapped their workplaces for three to four weeks for the Goethe-Institut’s Close-Up exchange programme. Christine Auerbach described her impressions of Romania in the Allgemeine Deutschen Zeitung für Rumänien. Elise Wilk reported from Munich for Bayerischer Rundfunk. They speak about their experiences in an interview

What’s the most important thing that you took home from the exchange?

Christine Auerbach (CA): The exchange reaffirmed for me that journalists need to get away from their desks as often as possible, out into the world beyond the office, to discover and research stories. Often, this is forgotten during the office routine with all its meetings and deadlines.

So the exchange really got down to the essence of reporting. Of course, I will especially take all the new acquaintances I’ve made here with me. I think and hope we’ll stay in touch.

Elise Wilk (EW): My stay at Bayerischer Rundfunk was very exciting and most of all very rewarding. Although the time there was very short, I took a lot home with me: experiences and – what I hadn’t anticipated – also a little radio know-how.

Germany and Romania are not very far apart, yet I once again noticed how little we know about other European countries. My colleagues at BR were really interested in learning more about Romania and invited me to speak in not one, but two programmes. Not many facts about Romania are heard in the German news.

But it goes both ways: in Romania they don’t hear about many topics that are important in Germany. For example the NSU trial that’s been going on in Munich that I attended two days. I knew about it from the theatre, but in the Romanian media there was only one brief report in 2011, nothing else.

I am also taking home the new places I discovered in Munich, the many people I got to know and I’ll admit one thing: I came to love working in radio a little. 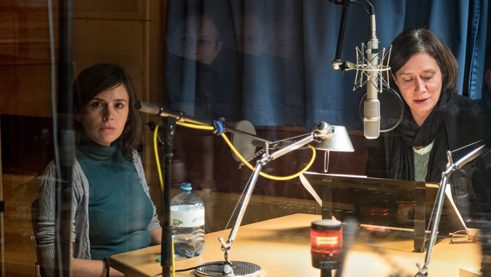 Elise Wilk recording at BR. | Photo: Cordula Flegel What was it like to work in the new office?

CA: The Allgemeine Deutsche Zeitung für Rumänien reports for the minority Germans living in Romania. It’s a daily newspaper that is delivered by post every day. It’s quite an achievement, I think, to maintain a newspaper like that in spite of the Internet and a very specific readership. It was fascinating to see what topics the newspaper covered and how everyday work in the editorial office functioned.

EW: At the beginning, I was a little nervous because I had never done radio in my life and knew absolutely nothing about it. Everything seems so terribly complicated. Also the program used to edit the sounds on tape seemed like an exotic foreign language to me.

So when I sat in front of the microphone to record an interview, I was trembling with excitement like a first-year journalism student. I was afraid something would go wrong. But then we began the actual work on the feature and I liked it so much that I understood why radio people are so crazy about their jobs.

In the end I would have liked to start all over again. I was very proud of my first report. It’s like when your first article is printed and you run to the newspaper stand in the morning to buy a paper.

The colleagues at BR were very nice and took me everywhere with them. I would have liked to stay longer.

Why did you join Close-Up?

CA: Definitely because I was curious. I wasn’t familiar with Romania but had always wanted to visit the country. I also thought the exchange concept was very good. It’s much more than a research scholarship where you mainly do research on your own.

Having a base in the exchange office means you get into the new life and society much faster. Starting with a barbecue for a colleague, to going out for a beer after work, to assisting in researching interviewees. From the very beginning I felt at home in Bucharest and Brașov.

EW: Unlike Christine who had never been to Romania, I’ve been to Germany very many times – to almost every part of the country. So it wasn’t new for me. But I envied Christine a little for that; your impressions are simply different when you’re in a foreign country. My motivation was also curiosity and yes, now and then you have to get out of your routine, especially if you’re a journalist. I wanted to learn something new.

What image did you have of your host countries before you went there?

CA: Romania doesn’t have the best reputation in Germany; there are sadly still a lot of preconceptions. I never shared them, but I didn’t have a real own concept of the country. Bucharest was one of the most exciting places: the present and the past rub shoulders there in the smallest space. You notice that the city and its inhabitants are now seeking a new identity.

Should I be a hipster or a leftist intellectual? Should I go out and demonstrate against the government or not? I’ve rarely discussed politics so much as I did there. At one time, Bucharest was considered the Paris of the East, then the city became Ceausescu’s playground – and now? I’m sure it wasn’t the last time I’ll be there.

EW: Germany is not a foreign country for me, but a country I’ve travelled to at least twice a year since childhood. Honestly, I secretly wished I would end up in Berlin – it’s one of my favourite cities.

I know Munich well, too, because my cousin, a close friend and a number of acquaintances live there. The city was second on my list. But now that I’ve returned, I’m glad I was in Munich. It couldn’t have been better. I discovered new facets of the city and felt really comfortable here. It’s a pity that I didn’t have time to do everything I’d planned. I’ll save it for “next time.”

Cultural journalists from Bosnian-Herzegovina, Bulgaria, Germany, Romania and Slovakia as well as Estonia and Latvia swap their workplaces for three to four weeks.
They learn about the daily work routine in their host country and report on their impressions on location.

Christine Auerbach is a journalist working for various media, chiefly Bayerischer Rundfunk. After completing her comparative and political studies in Munich, she graduated from the Deutsche Journalistenschule. Since then, her work has taken her to locations such as Russia, Egypt, Saudi Arabia and Bangladesh. She preferably uses small stories to report on big political issues.

Elise Wilk studied Journalism at Babeș-Bolyai University in Cluj-Napoca and has a Master’s degree in Literature/Communication and Playwriting. Between 2004 and 2010, she worked for the Romanian daily newspapers Transilvania Expres and Romania libera and was a scholarship holder of the Robert Bosch Foundation. Since 2015, she has been the editor-in-chief of the weekly newspaper Karpatenrundschau and a correspondent for Allgemeine Deutsche Zeitung für Rumänien. Elise Wilk is also a freelance playwright.