​This year’s curatorial resident at MINI/Goethe-Institut Curatorial Residencies Ludlow 38 in New York talks about his curatorial practice, the NSU trial, and his fascination with the intersection of art and law.

Avi Feldman worked as a lawyer in Israel for two years before he decided to follow his calling into the art world. He initiated a video festival in Israel and started a PhD in Practice in Curating that he just finished. His research finally took him to Germany. He went on a prestigious Rave-Stipendium from ifa to study the video archive at the Neuer Berliner Kunstverein and stayed – at least half of the time. Since then, Avi divides his time between Germany and Tel Aviv, organizing workshops and encounters between artists and legal practitioners to explore the intersection of art and law. 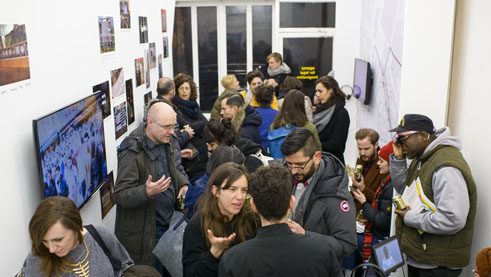 Exhibition opening „We Indict! Unraveling Structural Racism in Germany“. | Photo: Goethe-Institut New York/Gareth Smit Being a curator is always a question of negotiation

You’re curating this year’s Ludlow 38 program. Do you have a specific way to tackle new spaces?

Being a curator is always a question of negotiation, a question of cooperation, and of course it's also a question of power and money. So every project has to answer a very diverse set of questions and therefore every exhibition is different. Something I am definitely more and more interested in is understanding a space as a place that remembers and accumulates information, memories, and traces from its past. I want to get a sense of how the Ludlow 38 gallery space and its surroundings, its location, the institution it’s affiliated with, how all of these work. I want to understand this continuity between past and present, and I’m interested in how a space like this one can grow and develop over time.

What does it mean for you to get the Ludlow 38 residency?

In many ways Ludlow 38 is an opportunity for me to expand and go beyond what I envisioned during my projects in Israel over the past two years. At Ludlow 38 I can bring that vision to a wider audience and put it in relation to Germany, the United States, and Israel at the same time. The residency allows me to further explore my ideas which I now frame as “The Agency for Legal Imagination”. These ideas are rooted in theoretical, more scholarly thoughts, but the direction now is: how do I implement them in exhibitions, events, performances, screenings, and more? 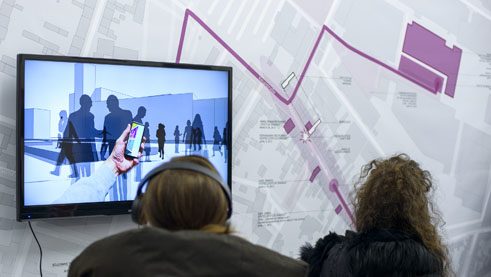 The intersections of art and law

How did your fascination with the intersection of art and law come about?

In 2010 I curated my first large exhibition at a museum. While planning this exhibition, I didn’t take the legal sphere into account at all. But when I sat down and started to write the text for the catalog, I found myself quoting verdicts by the Supreme Court of Israel. When I started drifting into the art world, I thought I had put all legal thoughts and theories aside and would not use them anymore. But then I realized that some resources, knowledge, references from the legal world could bring truly fascinating perspectives to my curatorial practice. That’s when I found that there is something between art and law that needs to be further explored, and first of all named, in order to understand the fascinating influence that the law has on our artistic work, and our daily life for that matter.

Your first exhibition at Ludlow 38 “We Indict! Unraveling Structural Racism in Germany” follows a five day workshop called “Tribunal – Unraveling the NSU Complex” which dealt with the NSU trials in Germany from a migrant perspective. Why did you want to bring this project to Ludlow 38?

Once I got the Ludlow 38 residency, I knew that, working for a German institution, I would have to first of all discuss urgent German matters. Learning about the NSU trial has been disturbing for me: the way it was depicted in the media, the way victims, migrants are not being heard or listened to and are not given the opportunity to share their feelings and their knowledge. That kept bothering me as somebody who lives in Germany. 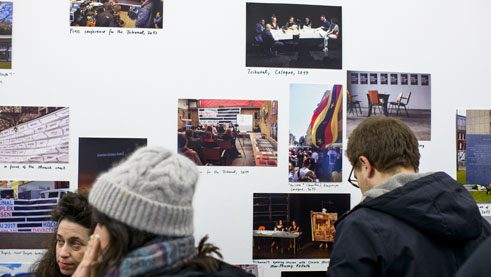 So when I saw a video by Forensic Architecture – who were invited by the Tribunal to conduct a counter-investigation – at the last documenta, it became clear to me that I needed to connect with them for my first exhibition at Ludlow 38. I am lucky that I have known Timo (Glatz) and Gesine (Schuett), with whom I’m co-curating this exhibition, for a long time. We were able to get images of different demonstrations, interventions, performances, and more, from the period before, during, and after the Tribunal. All of these will be presented at Ludlow 38 in the form of a counter-archive, for the first time in the US. Unlike other Tribunals in the past, this one was not summoned to call out the need for a legal investigation but to show that the one in place is not functioning.

It sounds like you have a very interesting year ahead of you. If you think about the end of 2018, what would you like to have accomplished at Ludlow 38?

I hope that by the end of the year we will have reached out to a larger and newer audience. I hope we will have made some sort of contribution to or will have had some influence on how artists, curators, art institutions, cultural institutions, legal experts, law faculties think about the relationship between art and law.

Ludlow 38 is the Goethe-Institut New York’s contemporary art space, made possible with the generous support of MINI. Located on the Lower East Side, it has provided for curatorial experimentation in the tradition of the German “Kunstverein” since 2008. Its mission is to introduce new international perspectives to the downtown art community and to foster dialogue within the aesthetic and sociopolitical context of New York and the United States. Initially programmed by a different Kunstverein every year, the space was relaunched in 2011 as a residency program for young curators from Germany.