Ranga Yogeshwar
It affects us all

The science journalist, physicist and author Ranga Yogeshwar toured Turkey with his lecture “The Future of the Digital World.” In our interview he speaks about his appearances at the Goethe-Instituts in Ankara and Istanbul, about Artificial Intelligence and about what the Turkish and German audiences have in common.

You just held lectures in Ankara and Istanbul. How did the events go there?

When you talk about a topic like Artificial Intelligence, it’s no longer a national issue. It affects us all. As a result, the questions and reflections expressed in Turkey were good and truly global in scope. I liked that a lot. I also really enjoyed the great openness of the Turkish audience and at the beginning I tried to speak a few words in Turkish. I was immediately struck by the great warmth and great potential. There are lots of intelligent, open-minded people. And the population is strikingly young. The average age in Ankara or Istanbul is lower than in Germany. 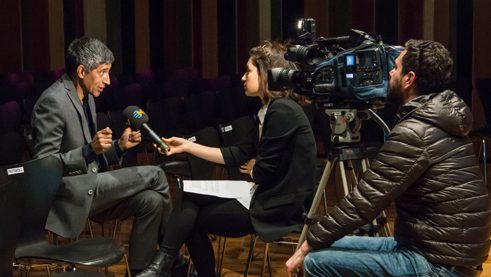 Against a one-dimensional perspective

Is it possible to speak about digitisation in Turkey without mentioning the politics there?

I think it’s possible. I think that we tend to generalise too quickly. We’re not satisfied with what Mr Erdogan is doing so we throw all of Turkey into one pot. We are doing this country a great disservice in that. Because of course Turkey, like any other country, can’t be seen in sweeping generalisations. There are a lot of people there with many different ideas, but we’re at risk of only looking at such countries from this one-dimensional, purely party-political perspective.

Does the Turkish audience react differently to your lectures than the German audience?

No. My message is instead that the questions are amazingly similar. Whether you’re walking through a city like Istanbul or taking a subway ride in Berlin, the overall grammar of communication is extremely similar. I can’t say whether that’s good or bad. Maybe it’s simply the consequence of a world that is growing together entirely. The interesting thing about it is that at least a large part of the population is thinking in similar categories. In countries that adhere more to traditions, the breaks with the new may be stronger than in other countries. But in Germany we also have older people who don’t understand how the Internet actually works. So there’s no national difference, but more an age difference. 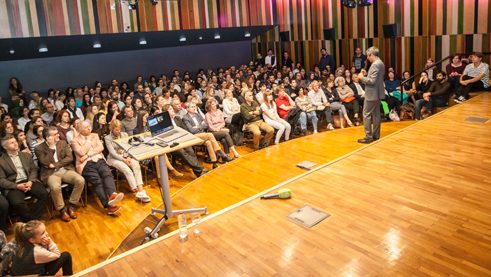 Full house for Ranga Yogeshwar’s lecture on “The Future of the Digital World” | Photo: Okan Kaya

The sound makes the music

Is the internet not making us a lot smarter than most people think?

Sometimes it does. For example, if you’re travelling somewhere, you can find things out with your smartphone. Although there’s also a lot of fake news and nonsense circulating on the Internet. But with a little media literacy, it’s a great thing. And the advantage is that for the first time in the history of humanity this knowledge is gaining symmetry in the global dimension: Whether you’re in Bayreuth or Mumbai, you can look for information either place. Which is not something we should take for granted.

In your lectures, you ask the question, “Human and machine – who programs who?” Is there a clear answer?

In Ankara we had great translators who simultaneously translated for the Turkish-speaking audience. The intriguing question is whether these interpreters will be around in ten years time. Or will people plug in their headphones because digital assistants translate better than humans? It depends a bit on what we mean by language. There’s irony, there’s the way something is articulated. “The sound makes the music,” as we say in German. This nuance has to be incorporated in an authentic translation. Aristotle asked this question long ago: What is the difference between us humans and the rest? Is there a special identifier? Now we have to ask again what makes us special.

Ranga Yogeshwar (born 1959) worked from 1987 to 2008 as a science editor at the WDR in Cologne and is now working as a freelance journalist and author. He writes regularly in leading print media and is a welcome guest on talk shows. His books Sonst noch Fragen?, Ach so! and most recently Nächste Ausfahrt Zukunft quickly became bestsellers and have been translated into many languages. Yogeshwar has been awarded several prizes, including an honorary doctorate from the University of Wuppertal, the Federal Cross of Merit, the Order of Merit of North Rhine-Westphalia and the Ordre de Mérite du Grand-Duché de Luxembourg. He lives with his family near Cologne.