Symbiz
On Tour with Music Nomads

The tour was an opportunity for musical and cultural exchange | Photo: Frederik Seeler

In April with the support of the Goethe-Institut, the Berlin electro band Symbiz travelled East Africa. They met African artists and held concerts and music workshops.

“Could you freestyle something?” asks a participant pointing to the microphone next to the mixer. For an hour, the band Symbiz has been holding a beat workshop in Dar es Salaam. The two band members show how to mix and refine beats on a small laptop screen. Twenty young musicians from Dar es Salaam are seated in front of them on plastic chairs listening to the interpreter translate from English to Swahili. The rain is pattering on the corrugated iron roof, mosquitoes are whirring through the air, while the participants’ attention is whirring away with them. 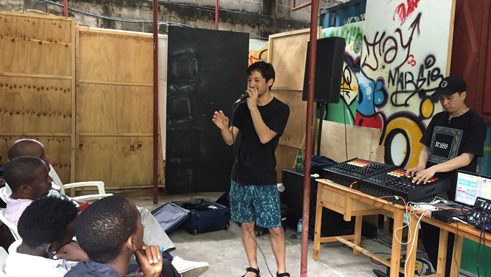 “You get to know incredibly nice people”

“Could you maybe play a song so that we can get to know your music?” asks another participant. The two band members look at each other. The singer Zhi Yang Trieu takes the mic and quietly begins to sing the chorus of one of their songs. The beat producer Sebastian Meyerholz pushes the slider up and the bass resounds from the speakers. Already, the others have leapt up, clapping in time, filming with their cell phones. Two Tanzanian rappers walk to the front and take turns rapping the beat they are hearing for the first time. Singer Trieu accompanies them on the chorus. Suddenly it’s as though they are speaking the same language.

For almost three weeks, the electro and reggae band Symbiz toured East Africa. At the invitation of the Goethe-Institut they travelled through Tanzania, Mozambique, Zimbabwe, Ethiopia and Kenya. On the way they played five concerts, met musicians and created music together in workshops. International tours are practically routine for Symbiz. The two Berliners are drawn abroad time and again. They’ve visited India, China, Venezuela and Russia several times for concerts, and they also know Africa very well. They continue to work together with musicians from Uganda, Zanzibar and Zimbabwe who they met at concerts. When asked how they became music nomads, band founder Sebastian Meyerholz replies, “You simply get to know incredibly nice people every time you perform, who then invite you to new gigs.” 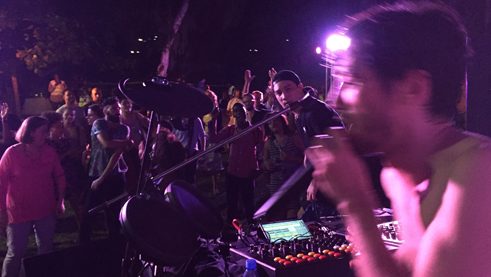 The sound of Symbiz’s music makes it obvious that they’ve seen the world. Meyerholz jokingly calls their genre “ruckus reggae”; a blend of dubstep, dancehall, Chinese bass music and Caribbean drums. Singer Zhi Yung Trieu sings some of the lyrics in Cantonese or raps in Jamaican Patois slang. Meyerholz says, “Our music may not have a proper name, but it has one goal: energy.”

But does it appeal to an African audience? On their first stop, they play in the Nafasi Art Space in Dar es Salaam. Despite the rainy season, 200 people have come and crowd in front of the covered stage. Meyerholz hits the drum pads and Trieu begins to rap. For a few moments, it seems the audience isn’t sure how to dance to it, but when the bass starts booming, they’re jumping up and down. A woman whirls her dreadlocks in the air, a little boy practices his break dance. After the concert, Meyerholz stands under a palm tree, wiping the sweat off his forehead with a towel. A musician who had attended the workshop approaches him. He says, “Your music is really global. I recognise so many of our rhythms in it. My mother might think it’s a little aggressive, but she would still dance to it.” Meyerholz thanks him and then they talk about influences on African music for twenty minutes, share phone numbers, and, while the musician fetches a beer, Meyerholz says, “This is exactly how exchange works: When you understand each other, when you share the same passion.”

From 12th to 28th April, the Berlin bass music duo Symbiz, consisting of Buddysym and Zhi MC, went on tour in East Africa at the invitation of the Goethe-Institut. First they gave a two-day concert and workshop in Dar es Salaam in Tanzania, followed by Maputo in Mozambique, Harare in Zimbabwe, Addis Ababa in Ethiopia and finally in the Kenyan capital of Nairobi.