Opening: Goethe-Institut Myanmar
For a civil society in which everyone has a place

At the official opening of the new Goethe-Institut in Myanmar, a ceremony was held with concerts and exhibitions. Guests included the President of the Goethe-Institut, Klaus-Dieter Lehmann, and the Bundestag Vice President Thomas Oppermann, who are hopefully anticipating cultural cooperation with Myanmar.

The Buddhist monks in their dark red robes are part of Myanmar like pagodas and food stalls. Of course, they could not be missing at the dedication of the Goethe-Institut in Yangon. The first house, founded in 1959, was the first Goethe-Institut in Southeast Asia but closed immediately after the military coup. In a historic villa not far from Shwedagon Pagoda, local construction companies built a wood-clad auditorium with attached library in 18 months after plans by the Berlin architect Oliver Gerhartz. The house reflects the history of Burma. Until the attack by Japan during the Second World War, a Chinese oligarch residing here made his money from opium and teakwood. After the war, the independence movement of General Aung San moved into the empty rooms. Today, his daughter Aung San Suu Kyi steers the country’s politics in constant struggle with the military. 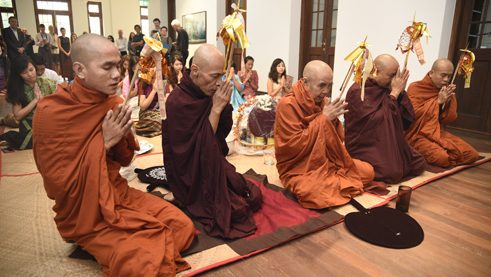 Guidepost in times of change

But before the employees can move into their offices and German courses can begin, the monks bless the new domicile. In front of the Buddha sculpture in the foyer they remind the staff members of the noble eightfold path: “Right understanding, right resolve, right speech, right action.” It is also reflected in the official speeches at the opening ceremony. The Minister of Culture wishes most for language education. Ambassador Dorothee Janetzke-Wenzel speaks of the needed transformation from socialist plan economics to a capitalist economy. Vice President of the Bundestag Thomas Oppermann, who travelled here especially for the event, praises the government of Myanmar for taking the “right path towards democracy.”

Institute director Xaver Augustin uses clearer words on the morning after the opening ceremony. “In the initial phase of the reform period four years ago, everything was much more liberal. This has been limited.” The response of many Myanmar intellectuals and the media to the persecution of the Rohingyas in particular has disappointed him. He notes, “The vast majority of the population thinks their expulsion is right.” 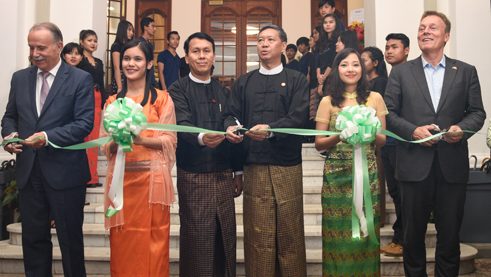 A new place for art

Augustin want to offer space to artists who dare to take a different, more critical look at their country. One example is the sculptor and performance artist Htein Lin, who fought for years as a guerrilla in the jungle against the military dictatorship and later spent time in prison. His iron sculpture on the first floor of the Goethe villa tells of an old problem that is still relevant: Under an LED screen with the request “Please rinse” sits an official made of iron, part naive folk art, part socialist realism. Beneath the desk, his grotesquely long left arm protrudes with an open hand.

Although censorship was officially abolished in 2012, there are still taboos explains American curator Nathalie Johnston, who has been living in Myanmar for several years, at the sidelines of the opening ceremony. “If a religious authority or their supporters feel attacked, you can quickly end up in prison.” She shows critical art by Htein Lin or his young colleague, the graffiti artist Kyaw Moe Khine (pseudonym: „Bart was not here“), in the protected rooms of her gallery. The fact that private galleries and institutions such as the Goethe-Institut offer space for artists such as Htein Lin or Tschum Mu Kai is one of the few good tidings from Myanmar: Buddha’s “right action” and “right speech” translated for a civil society in which everyone has a place.

The Goethe-Institut Myanmar was opened on the evening of 11 June with an official ceremony. The Vice President of the Bundestag, Thomas Oppermann, the President of the Goethe-Institut, Klaus-Dieter Lehmann, the Myanmar Minister of Education and Research and the Chief Minister of Yangon were present. In the morning, the dedication of the renovated villa was held by monks from the nearby monastery. In the following weeks, a diverse cultural programme will be presented with exhibitions by Myanma and German artists, a club night with DJs from Berlin and two concerts accompanying the only surviving silent film from Myanmar, Emerald Jungle of 1934, which was restored two years ago in part through funds from the German Foreign Office. The music will be played by traditional Myanma musicians from Berlin.