Performing Architecture
When a movement loses its meaning

Through "Performing Architecture", the Goethe-Institut is present at the Venice Biennale. Meg Stuart, who is being honoured for her life's work there, will stage her performance "Built to Last" and take part in a moving panel. In an interview, she speaks about her art and about things she hasn't dared to do yet.

You are known for very intense rehearsals. How do you deal with being in such intense contact with a group of people for several months?

I try not to obsess on the outcome too much. I try to take each day of rehearsal as it comes. The vocabulary we use in order to speak to each other is quite important. Giving space to everybody for getting lost for a while is also very important. What is particular about this family-like proximity is that everybody has their own rhythm. I always work with the questions ‘What is there?’ and ‘What could be?’ 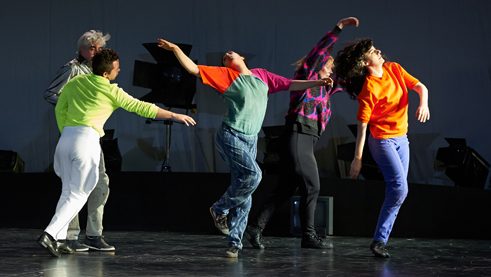 The body is not a piano

For “Splayed Mind Out”, which was staged at Documenta X, you collaborated with the video artist Gary Hill. It's said to be the first piece without concrete movement material. How will you proceed from here?

My method is: do a movement, let yourself be moved, and then imagine surrendering to this movement. And then turn it around and be the agent of your movement, own it, direct it. The way you shift your perception or your consciousness between these two is what creates the dance: the way you allow things to happen and the way you shape them. The dance is in the shift of consciousness, but what makes you move? Feelings, surely. Yet ‘feeling’ is a very flat word. And it doesn’t say anything about how we move. I’m more interested when movement looses its meaning.

But you nevertheless try to reach something meaningful. How do you know or feel when "it" is there?

If a movement loses its known meaning, it creates space for something else. It is the action of taking something out of its pattern that holds the meaning. But it’s not that all I do is emptying the gesture of its meaning. Sometimes it’s just a matter of attention and choices, or setting something up and wanting to knock down again. The meaningful is not a state to be reached, it is rather like a train. There has been a big shift in my work in the last years. I have become less focussed on states and started to speak about energy. Does something has energy in itself or not? How can you trace energetic streams or vibrations and how do you put that into a form? The body is not a piano! 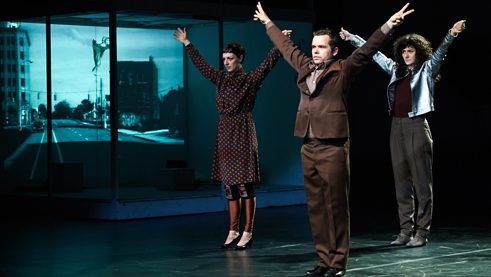 You have worked with different formats, styles of music, settings and spaces. Is there something, you would not yet dare to touch?

This is hard to say. I didn't touch opera yet. But do I even want to? I would surely love to make an improvised film in an intimate setting, inspired by Cassavetes with many brilliant dance artists in it. But maybe I can say one thing about daring: What I like is the moment in art when vulnerability is not something uncomfortable but something that is shared.

In one word: What is your art about?

I think it is about acceptance. The acceptance for there never being only one word to describe anything.

For the Venice Biennale, the Goethe-Institut is proposing an experimental space at the interface between ar­chitecture, choreography and institution with "Performing Architecture". Alongside the public space of the city of Venice itself full of people, the effect and meaning of architecture and its social relevance lie at the heart of various artistic works and performativ­e rounds of discussion. In the context of the Biennial­e, the programme makes a post-disciplinary exchange of ideas possible, as well as new spaces for thinking and experiencing