The Goethe-Institut Nigeria aims to support authors and publishers from Nigeria and the diaspora through its “Literary Crossroads”, where trends, topics and themes prevalent in literature are discussed. The related “Food Crossroads” seeks to explore and understand similarities and differences between Nigerian and German cuisine. In our two-part series, Nigerian food blogger Ozoz Sokoh shares her views on her participation in “Food Crossroads”, while the report of German social media influencer Felicitas Then, who was invited by the Goethe-Institut Nigeria, will follow on Wednesday.

When I sit in Lagos traffic, yellow streaks weaving like light sabres, I often think of Germany. I see Germany in the Danfo – the Volkswagen bus that became popular in Nigeria in the 1970s, and in the BMWs and Mini Coopers of the 21st century. I think of how sunny Nigerian optimism meets German design in this functional chaos.  But that’s not all I think about. I think about bread, about the Germans’ love for potatoes and the Nigerians’ for yams, about beer and copious amounts enjoyed across continents, about meat – pork in Germany versus Nigerian beef. And I think about curry powder. 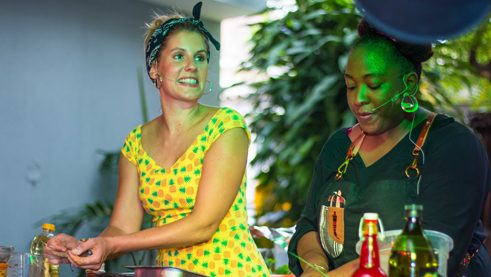 What binds us is bread

One of the earliest culinary ties I find is with bread. The Nigerian bread industry is one of the main stays of Nigerian food culture, much in the same way “Brot” is in Germany. Both countries are similar in that bread is present in many breakfasts and dinners, but that’s where the similarities end. Agege bread, originally from the Agege area of Lagos, is the most beloved bread in Nigeria. It is often made into a sandwich with “Akara”, fritters of raw black-eyed beans or Nigerian fried omelettes, replete with green bell peppers, red tomatoes and scotch bonnets; served to dip in soft, creamy beans and pepper sauce; sliced open like a book, pages lined with margarine or mayonnaise, yes mayonnaise.

While Agege bread is one of many, it is nowhere near the thousands of varieties of dark and white breads baked in Germany every day, from a variety of grains like wheat, rye, oat, spelt, buckwheat, linseed and millet. 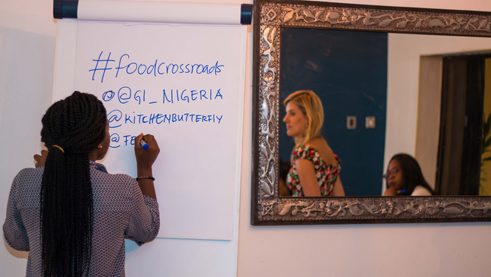 The currywurst capital of the world

I've been to Germany a few times – on a field trip to Bad Bentheim, a few freezing days at a Christmas market in Cologne and a gorgeous week in Berlin. Berlin afforded me the greatest exposure to German food and culture - meat, curry and potatoes. I often seek connections, anchors and similarities when I'm away from home. Food is an excellent medium to understand the world and to bridge the gap between the plates and tables. When I planned the trip to Berlin, I had no idea I was headed to the currywurst capital until we arrived and I ordered a plate.

Currywurst is German pork sausage - steamed, fried and then topped with curry ketchup and curry powder. Legend has it that in 1949, in a West Berlin food kiosk, Herta Heuwer in an “everything and the kitchen sink” moment, combined three ingredients received from British soldiers – tomato ketchup, Worcestershire sauce and curry powder. She served it over sauces and so the currywurst was born. In Nigeria, curry powder and dried thyme are the seasoning of choice, for our tomato sauces (known as stews) to Jollof and Fried rice. Chicken curries – with carrots, potatoes and green bell peppers are also curry-laced. 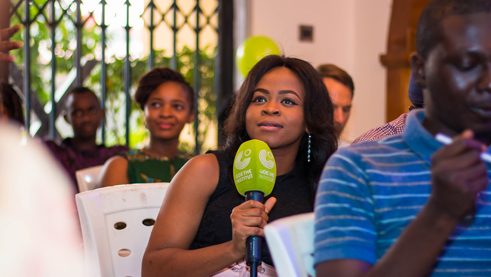 As part of the “Food Crossroads”, a series of events were held in Lagos over a long weekend. On the first day, I led a food tour of Lagos Island with German guests Felicitas Then and Theresa Schubert. We sampled some local favourites – Jollof Rice, Aganyin beans and Dodo (fried plantains), popular snacks made of coconut, groundnuts and wheat, Palm wine, Radler, pounded yam and Egusi. Some puff puff later at Ebeano in Lekki 1, some sugar cane juice at Earthblend juice bar and then it was time to head to “Hans and Rene” for some delicious gelato.

Day 2 featured an all-day food writing workshop for 12 participants, led by myself and Felicitas. We explored the similarities and differences between Nigerian and German cuisine, read and analysed a piece, wrote, discussed and realised how important sharing one’s culinary history and culture is. And the responsibility of owning and telling one’s story. 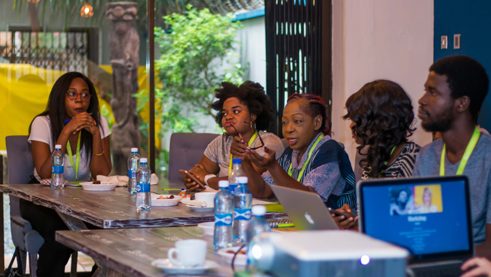 Participants of the food workshop | Photo: Jeremiah Ikongio A cooking session on Day 3 crowned the event. In front of a live audience, we responded to questions from the moderator, journalist and spoken word artist, Wana Udobang as well as the audience. What was particularly interesting about the session was that we both added twists to our recipes, based on German and Nigerian culture. I cooked Nigerian chicken pepper soup with mixed vegetables in the manner of German potato soup. I also made a zobo (hibiscus) – cherry cocktail, using a cherry brandy similar to some found in Germany. Felicitas prepared a suya-spiced Schnitzel, adding the peanut-y dry spice rub yaji to her schnitzel batter and crust. She also made a black forest gateaux, finished off with some zobo cherry sauce. If the clean plates from the audience were anything to go by, we fulfilled the brief – on cultural exchange and culinary diplomacy.

Ozoz Sokoh is an exploration geologist who is passionate about food, especially on her blog, "Kitchen Butterfly". In 2013, she coined the phrase "The New Nigerian Kitchen": her philosophy and practice to celebrate and document Nigerian cuisine in its entirety from classic recipes to reinventing and representing Nigerian food, unearthing history, sharing techniques and using old ingredients in new ways. She has created a number of novel documents like the first-ever seasonal produce for Nigeria and a guide to Nigerian tastes and flavours.