International German Olympics
Journey around the World with Taschengeld and Wanderlust

Together at the performance night "in 90 minutes around the world" | Foto: Martin Welker

Besides the German language, the International German Olympics celebrate the Olympic spirit of international understanding. More than 140 teenagers will participate in the world’s largest German language competition in 2018, getting to know one another, Germany and the local population.

They come from 74 countries, are between 14 and 17 years old and all of them are enthusiastic about the German language. The International German Olympics (IDO – Internationale Deutscholympiade) will take place in Freiburg from 15 to 28 July. The world’s largest competition for the German language targets the over 13 million teenagers on five continents who are learning German as a foreign language at their schools and have qualified in national preliminary rounds for the finals in Germany. 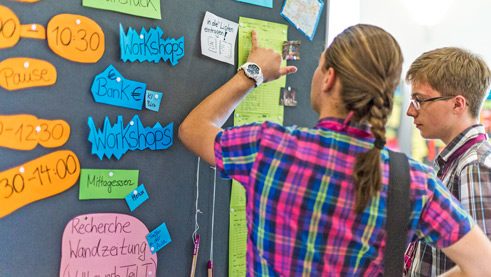 200 young people take part in the competition - that needs to be well planned | Foto: Martin Welker

The magic of German

Since 2008, the IDO has been held every two years by the Goethe-Institut together with the International Association of German Teachers. After Hamburg, Dresden, Frankfurt am Main and Berlin, in 2018 it will take place for the first time in Baden-Württemberg. The 14-day competition is not just about language skills, but also about team spirit, intercultural competence and creative potential. In addition to the chance to win gold, silver and bronze, the pupils vie for a much sought-after fairness prize for social engagement during the IDO.

On the project website the young German language fans reveal why they are learning German, what they are looking forward to most at the IDO and what their favourite words are in their native languages and in German. Fernweh, Wanderlust, Geborgenheit and Taschengeld are among them, but also Rindfleischetikettierungsüberwachungsaufgabenübertragungsgesetz, the longest German word. Gisela from Albania has multiple reasons for her favourite word, Versprechen (promise, pledge). “First of all,” she writes, “it is the meaning of my German name Gisela. Also, promises are one of the things I treasure the most and it’s the title of my favourite novel by the Swiss writer Friedrich Dürrenmatt.” Kengo from Japan loves the word Geschwindigkeit (speed), because it has “a beautiful pronunciation.” His number one word in Japanese is 義 (gi =justice), “because the meaning of the word is very strong and splendid.” 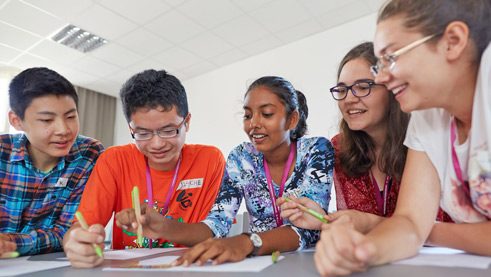 Around the World in 90 Minutes

In addition to the competition, the Olympic “athletes” can look forward to an extensive leisure and cultural programme in Germany, including city walks with Freiburg pupils, a trip to Europa Park, university tours with students from Albert Ludwig University and an exclusive concert by the band ok.danke.tschüss.

During the evening of nations, Around the World in 90 Minutes, the guests will present their home countries in 90 seconds, as a sketch, dance, song or another creative format. Ninety minutes, 74 countries and over 140 players on a big stage promise to be great fun. Arsen from Armenia definitely wants to take typical Armenian sweets to Germany. Will they will play a role in his performance, or will he use them to keep homesickness at bay? As we know, the way to a man’s heart is through his stomach. 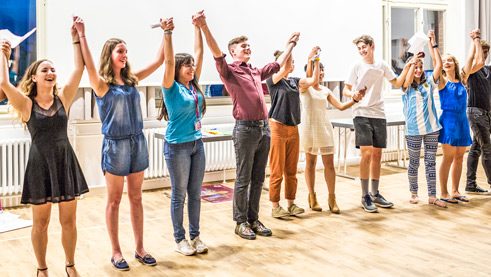 Getting to know each other the evening before | Foto: Martin Welker

Language is an element that shapes our lives

With over 200 people involved, alternating venues and numerous partners from education, politics and society, the IDO is also a major project of a special kind for the Goethe-Institut. “I am really looking forward to meeting the teenagers from all over the world in person. Language is an element that shapes our lives, so it fascinates me and can certainly be intensively experienced and promoted at the IDO,” says project manager Sabine Erlenwein, who was the director at the Goethe-Institut San Francisco a year ago and now heads the IDO from the head office in Munich.
For the local project leader Kay Hug, the IDO is a home game. He has been director of the Goethe-Institut in Freiburg since April this year. “For the first time we have been able to gain local schools as partners,” he boasts. “They sponsor the guests and integrate them into their school life for a day. For me, this is a lived and successful welcoming culture. I hope that it will result in many fruitful and lasting friendships for both sides.”