“He wished that the destructive power of nature would break over him again.” (Heinrich von Kleist) The opera project Erdbeben. Träume supported by the Goethe-Institut Tokyo celebrated its world premiere in Stuttgart on 1 July. In his interview, the Japanese composer Toshio Hosokawa spoke about his relationship with Western and Asian music and about man-made disasters.

Your music combines Asian and European traditions. How do you combine these two cultures in your work?

Toshio Hosokawa: I can’t answer that question directly. I listen to myself and compose the music I want to hear. I became familiar with European music at an early age through piano and music theory. I’m deeply attached to it by now. I came to Germany to study when I was 20 years old. But living in Germany made me realise that my roots are elsewhere. Since then, I have also dealt with the traditional music of Japan and Asia, which I like as well. I listen to Western and Asian music almost every day and continue to study them. This creates a special musical sensibility from which I try to compose my pieces.

You received the commission from the Stuttgart Opera to write an opera based on Heinrich von Kleist’s novella The Earthquake in Chili. Had you read the novella? What was your approach in your adaptation?

On 11 March 2011, the day of the great earthquake, I was in the Wissenschaftskolleg in Berlin. A German literary scholar I had met there told me about the novella. Since the Christian faith is very much in the foreground in it, it seemed difficult to me at first to translate the text as a contemporary opera. But when I received the commission from the Stuttgart Opera, in addition to some other works, I suggested Kleist’s novella, and Jossi Wieler and his team liked it the best. Before I began composing, I read the novella in detail under the excellent guidance of a German scholar at the Goethe-Institut. I was impressed by the timeliness and the depth and breadth of the topic again. This reading helped me a lot to really understand the content. 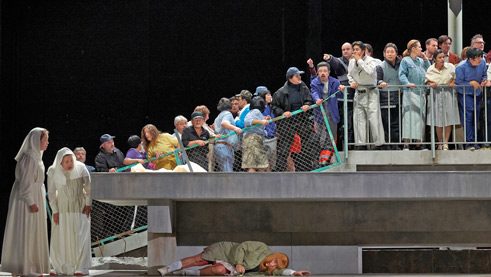 The seductiveness of the masses inspired Toshio Hosokawa to a choral part. | Photo: A.T. Schaefer

The premiere took place in early July. How did you perceive the reactions of the German audience?

The fact that the opera was received with enthusiasm was a great relief. A Japanese composer is invited to compose an opera based on a well-known German classic! Honestly, I was worried about how the audience would react, but many confirmed to me that they were moved.
The heart of the story is a historic 1647 earthquake in Santiago de Chile. As a Japanese, does one have a different access to earthquakes or the fear of earthquakes?
We Japanese know how terrible earthquakes can be. In particular the Kobe earthquake in 1995 and the big catastrophe in 2011 terrified us. We are familiar not with only earthquakes, but natural disasters of all kinds, but the 2011 disaster was special in that humans caused it as well. The explosion of the nuclear power plant following two natural disasters, the earthquake and the tsunami, was ultimately a product of civilisation that plunged people into misfortune. 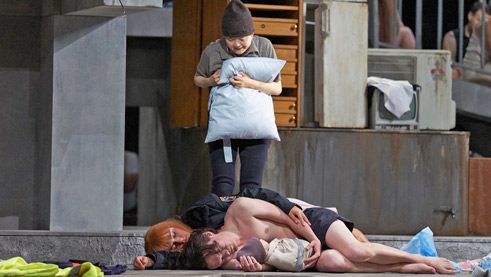 You studied in Germany and have received several awards in this country. How is collaboration with German artists?

The German music scene is big and obliging and has given even me, as a foreigner, a great opportunity. It is hardly comparable to any other country in Europe. I’ve been able to establish myself in this scene, I received commissions and through them the chance to discover my own style. I am always impressed by the passion, motivation and professionalism of German musicians. Germany has excellent musicians and listeners who enjoy and understand their music.

Marcel Beyer wrote the libretto: Do you recognise a special musicality in his work?

His libretto is a bit too difficult to understand with my limited knowledge of German. But during our conversation at the Goethe-Institut in Tokyo, he read the text aloud to me. While composing I listened to the recording of that over and over again. Even if I encountered words I couldn’t understand, I was able to find the right music for the opera on the basis of rhythm, musicality and form.

Before the production of the opera Erdbeben. Träume began, the Goethe-Institut Tokyo supported the composer in his research of Kleist’s novella. Together with Toshio Hosokawa, a group of experts in German studies, musicology and media studies reflected on the various facets of Kleist’s story. In April 2017, the team from the Stuttgart Opera travelled to Japan to visit the earthquake-struck region around Fukushima.