Have you called a spy today? Nina Los and Niklas John from the artist collective Peng! are represented at the Manifesta 12 in Palermo with the installation “Call a Spy” and with videos for their campaign Become an Escape Agent!, which is supported by the Goethe-Institut Palermo. During an installation break we talked with Nina Los and Niklas John.

Peng! in Palermo: How did you come to the Manifesta?

Nina Los: Fortunately, we were invited here. In 2015, one of the curators made a video about our campaign Become an Escape Agent. And then they contacted and invited us. And because there is also this other “digital” strand, they immediately booked the “Call a Spy” box.

Could you explain the works briefly?

Niklas John: For Escape Agents, during the so-called “Summer of Migration” we called on Germans taking holidays in other EU countries to bring refugees with them in their cars on their way back to Germany. The other thing we’re exhibiting here is “Call a Spy.” Phone numbers were leaked allowing us to build an installation that effectively lets you talk to intelligence personnel. They are unprepared, pick up the phone and don’t know who’s calling. 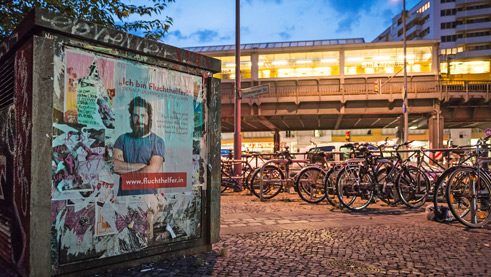 Call to action "Become an Escape Agent!" | Photo: Peng Collective How do the two installations fit in here in Palermo?

Nina Los: Palermo is full of treasures still shining under dust. And that’s why it’s so great that we can use these places. It’s relatively ambitious to put a phone box from the 1990s back into operation in the courtyard of a building from the fourteenth and fifteenth centuries.

How location-specific can and does a work need to be?

Nina Los: The Become an Escape Agent! videos are displayed in the Palazzo Forcella De Seta directly by the sea. I think it’s very nice that videos showing how people had to cross the sea are shown in such close proximity to the Mediterranean itself. Palermo is a very topical place, not least because of the recent incident with the Aquarius. As for “Call a Spy” I would say not everyone in Italy has an association with a phone box from the 1990s. 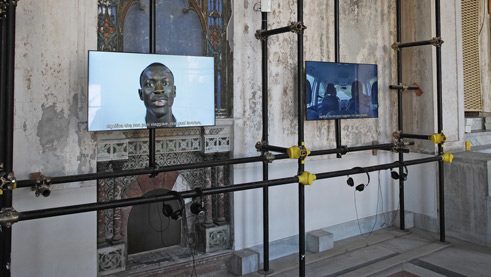 Video installation "Become an Escape Agent!“ at the sea of Palermo | Photo: Wolfgang Träger How do you feel showing your work in Italy in the summer of  2018?

Nina Los: I carry a German and an Italian passport. And I have to admit both countries are politically a big challenge for me.

Niklas John: It’s a necessity to work on the challenges of our time. And that’s exciting to me. And I’m happy that we’re implementing these actions here together.

Nina Los: Since we see ourselves as political persons the work is political, because that is the only form of expression that we have. That doesn’t mean that all art has to be political now.

Are these days in which you’ve even been invited to the Manifesta really so unique?

Niklas John: In Europe, and especially in Germany, we’re experiencing a shift to the right and a tendency towards the return of fascist ideology, which poses a particular challenge to society as a whole and to us as politically active people. Especially with regard to the Manifesta, this is one of our main challenges.

Installation as an experiment

How do you expect your works will be received?

Niklas John: People approach the work in different ways, so you can’t really judge that right from the outset, and the things we’re here with now are not our main work. Our work is mainly done in the media, on the Internet. That’s why we’re really curious about how it will turn out.

Nina Los: This is always an experiment for us, too. I hope, most of all for Become an Escape Agent!, that the subject is tangible for the people in the city that has one of the few mayors who said, “We’ll take the people! We’ll do it differently than the whole EU demonstrates and dictates to us.”

The interview was conducted by Roman Maruhn, Goethe-Institut Palermo.