As part of the Goethe-Institut’s Transatlantic Outreach Program (TOP), American teachers get insights in business and history during their study tour through Germany. A visit to Siemens AG was part of the programme in July.

For the trainees at Siemens, it’s not routine when a group of American teachers is suddenly standing in their workshop. But it was also a new experience for the educators from overseas. After all, the dual training system that the prospective electronics engineers at Siemens go through is not common in their homeland. The visit to Munich was on the agenda to familiarise the guests with the company’s training programme.

The guests are a group of social studies teachers from the USA and Canada who are spending nearly two weeks in Munich, Kaufbeuren, Nuremberg, Geisa and Berlin as part of the Transatlantic Outreach Program. This exchange began in 2002 and includes study trips for STEM teachers as well as informative trips for US policy-makers. So far, around 1,600 women and men have participated.

Dan Hoppe, who teaches American history in Stevens Point, Wisconsin, highlights how much he learned during the visit to Siemens. The 40-year-old wants to pass this knowledge on to his pupils. Hannah Christian, who is from New York City and teaches high school economics and psychology in Baltimore, Maryland, also benefited from the inside look, saying, “In the US, the dual system is not widespread, but it makes sense. Unfortunately, vocational training is stigmatised in my homeland. Instead, students are encouraged to go to college. I would be delighted if I could make vocational training similar to that in Germany better known in my district.” Even though her high school has a vocational training course, she explains, it’s an absolute exception. 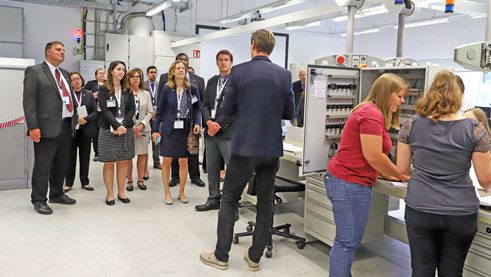 “We’re also here to maintain the relations between our countries.”

German history is another important topic that comes up on the journey. “I want to teach my students that German history doesn’t only consist of the two world wars and the Holocaust, and how Germany developed into an economic powerhouse after the Second World War,” says Ruth Smith. She teaches in Waldheim in the Canadian province of Saskatchewan, a town in which more than 80 percent of the inhabitants have German roots and 20 percent of the pupils speak German. Smith’s grandparents were German Mennonites who emigrated to Canada in 1914. Jordan Penner from the Westpark School in Portage la Prairie, Manitoba, wants to learn more about the transatlantic partnership between the US and Germany, but also about education, politics and culture, because he considers Germany an innovative country.

Kristin H. Strobel, a history teacher from Lexington, Massachusetts who is married to a German, was moved by the visit to the Dachau Concentration Camp Memorial Site. For the historian, the way Germans deal with their history serves as a role model for her own people. “Americans also have to learn how to talk about their past,” she says. For Rebecca DiBrienza from Scotch Plains, New Jersey the discourse on the culture of remembrance is one the central aspects of the study trip, too. “What distinguishes the collective memory of a nation?” While the Germans observe world events more intensely, Americans still lack this international perspective. She notes, “With the knowledge I’ve gained on this trip, I’d like to convey the global perspective to my students.”

Greg Hill, who teaches geography in Mesquite, Texas, worries that German-US relations have deteriorated under US President Trump. “We’re also here to maintain the relations between our countries. The relationship with Germany is one of the most important for America. We must never forget that despite the short-sighted goals of our President.” 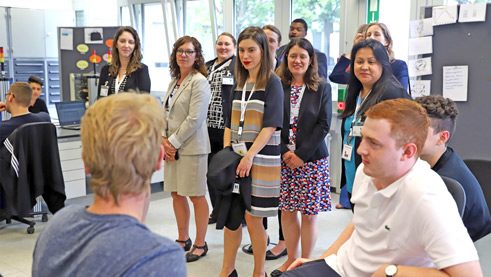 Dialogue about personal identity and culture | Photo: Wood Powell
The Transatlantic Outreach Program (TOP) is a project by the Goethe-Institut in cooperation with the Foreign Office, the Robert Bosch Stiftung, Deutsche Bank and Siemens AG.

Transatlantic relations constantly face challenges. The educational Transatlantic Outreach Program (TOP) and the German American Partnership Program (GAPP) supported by both governments for German and American school classes aim to help constructively shape these relations. Again this year, around 100 American teachers and 250 groups of pupils from 48 states travelled to Germany from June to July 2018. The objectives of both programmes are to promote intercultural exchange between the two countries as well as the German language in the USA, and to convey an up-to-date image of Germany.