Shared Cities
What is mine is yours

Sharing and swapping seem to be in fashion. Nevertheless, sharing initiatives are gaining more popularity in the West than in Eastern Europe. In an interview, researcher Brian Fabo puts this into a historical context. The interview was first published in the second issue of "Magazyn Miasta: Cities Magazine", which his part of the European project "Shared Cities: Creative Momentum", a platform for architecture, art, urbanism and the sharing economy in Central and Eastern Europe.

Jedrzej Burszta: Is there any common history of sharing in post-communist countries in our region?

Brian Fabo: I don’t necessarily think there was one model of sharing. The Polish experience under that system was different than the Czechoslovakian. The regime almost abandoned the previous ideological core and became more cynical, in a way striking a deal with the citizens – if you will continue pretending you are loyal, then we won’t beat you up. But at the same time there was a new notion that a person who doesn’t steal from the state in fact steals from his own family. This was a popular way of thinking – if you don’t take some goods for yourself, including public goods, someone else will. This only became stronger after the fall of communism. 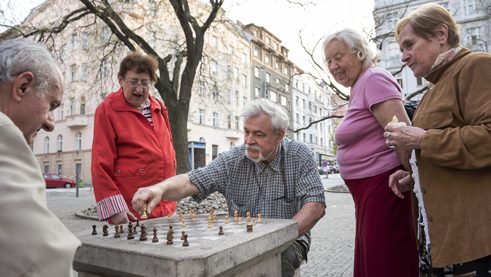 How would you explain the different attitudes to sharing today?

The period of transition from communism to capitalism marked a crucial change not only in the political economy, but there was also a social and cultural change. If you maintain public space, or publicly-accessible sources, it becomes easier to develop trust between strangers who can then find it simpler to do business with each other. But our models of capitalism, though they seem to be reproducing the Western paradigm, are much less developed.

When Slovaks move to Austrian or Hungarian villages which are basically suburbs of Bratislava, you can tell which houses are owned by Slovaks because they have high fences around their houses. This is my property, stay out! You never see this in households of “native” Austrians. We can see traces of this mentality even on the street – something I have never seen in Western cities. You have public space which is being used by city residents primarily for…parking their cars, naturally. People put up a sign that this place is reserved for me. 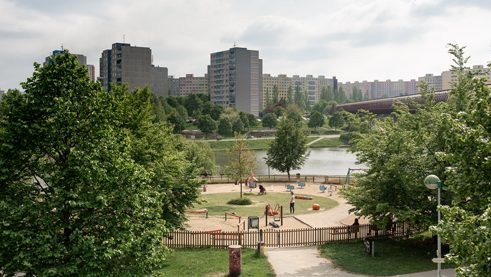 The housing estate Jihozapadni Mesto in Prague, as part of the exhibition "Arrival City" | Photo: Anna Venezia
Is that why sharing initiatives are much less popular in our region?

In this sense, the “East versus West” division in Europe is still sharply defined. The sharing economy project like bike sharing picks up so much better in the West than in our region. This is not surprising in a society where the notion of public space is not as developed, making these ideas much less popular. Although this situation is beginning to change, fortunately.

Some of these grassroots examples of sharing initiatives in cities are being obscured by the more visible and controversial set of economic practices collected under the umbrella term of “sharing economy”.

I find the term “sharing economy” very ambiguous. People who have skills, for example competent gardeners, can now post about their skills on a website and you can hire them.
Traditionally, the Western Europeans are the consumers. We are rather providing the labor. This arrangement is being preserved with the on-demand labor I mentioned earlier, in which odds are skewed even more against the labor suppliers than is the case on more traditional labor markets. A large part of the sharing economy, not really sharing but providing your labor on demand, is ideal for an anatomized society as ours, with people literally hiding behind fences and walls. It makes it easier to commodify these types of services.

Only a short-lived trend?

Should we be hopeful about the future of sharing, or will this be a short-lived trend?

There are many things that can make us hopeful, including wonderful examples of sharing initiatives in cities, promoted by local activists and directed at helping communities to become more connected. As humans, we are social animals; we are defined by the communal nature of our relations. But they are not powerful enough to counter the tendencies towards individualism and the commodification of humans that perhaps are inherent to contemporary global capitalism. Can we see more people who are able to influence the discourse in society to popularize ideas such as sharing bikes; essentially, can you make sharing cool? I think that is the most important question concerning the future of sharing in Eastern Europe.
____

The interview was conducted by Jędrzej Burszta.

The entire „Magazyn Miasta: Cities Magazine“ can be downloaded from here.