The Power of Reproduction, a project by the Goethe-Institut Porto Alegre, invites visitors to undertake an artistic and theoretical examination of today’s concept of duplication. Now fourteen German and Brazilian artists are exploring various facets of replication in the digital age at the Museu de Arte do Rio Grande do Sul.

It is no coincidence that the work of artist Thomas Kilpper is positioned at the centre of the large exhibition hall of Porto Alegre’s Museu de Arte do Rio Grande do Sul, considering that it is the most reminiscent of what printed graphics are commonly understood to be. On a waving banner, red capital letters on a green and red background spell out the motto “Another world is necessary.” In between we recognise portraits of people from contemporary history: the former US President Lyndon B Johnson or the Brazilian environmental activist José Lutzenberger.

Kilpper carved the scenery into the parquet floor of the Brazilian artist’s residence Vila Flores and “printed” the picture with his own feet on a canvas over it. 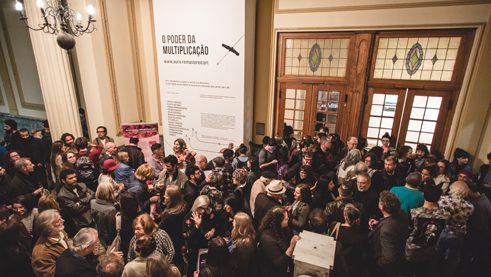 The lobby of the Museu de Arte do Rio Grande do Sul | Photo: Fabio Alt

The nine Brazilian and five German artists that Gregor Jansen, director of the Kunsthalle Düsseldorf, assembled in the art museum in southern Brazil under the title O Poder da Multiplicação – The Power of Reproduction show that artistic reproduction is far from limited to classic techniques such as woodblock printing or etching.

German artist Hanna Hennenkemper sprinkles the old tools on her printing plates with resin dust to give the impression of an archaeological artefact. Regina Silveira, the Grande Dame of Brazilian art, interweaves traditional graphic techniques with newer industrial printing techniques such as offset, heliography and microfilm to address questions of light and shade, presence and absence, power and domination. 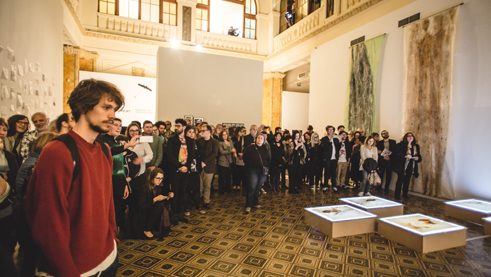 The exhibition at the Museu de Arte do Rio Grande do Sul | Photo: Fabio Alt

How strongly duplication technologies are still associated with political aspirations is demonstrated by the works of the Brazilian artist Xadalu. He commemorates the indigenous community, oppressed for centuries by the Portuguese colonisers, with the silkscreen-printed head of a Guarani, which he has posted all over Porto Alegre. A group of Guarani with whom Xadalu regularly collaborates contributed a colourful musical performance to the packed opening of the show on Tuesday night.

At first glance, Porto Alegre seems to be an unusual choice of venue. The metropolis of four million inhabitants is the capital of the Brazilian state of Rio Grande do Azul, which is considered the land of the gauchos. But printed graphics have been produced in Rio Grande do Sul ever since the mid-nineteenth century. Initiated by the German immigrants, many printing clubs emerged here in the 1950s that became the model for similar initiatives for collective artistic work throughout South America. 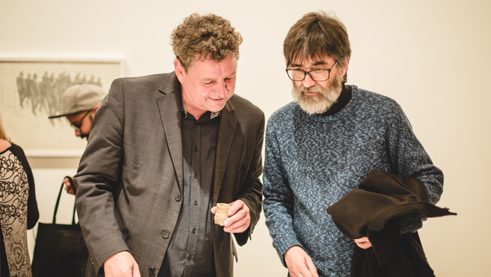 The future of reproduction in the digital age

The exhibition is a continuation of the project The Power of Printmaking, with which the Goethe-Institut Porto Alegro presented historical positions of Brazilian printing art from 1960 to 2015 two years ago. With The Power of Reproduction, the discourse now opens into the present-day. “We want to discuss the future of reproduction in the digital age,” institute director Marina Ludemann says, explaining the motivation behind her ambitious long-term project on the locally rather unknown shared cultural heritage of Germany and Brazil.

“That which withers in the age of mechanical reproduction is the aura of the work of art.” This statement by Walter Benjamin in his famous essay “The Work of Art in the Age of Mechanical Reproduction” has not proven true. Otherwise, art lovers would not continue to forms queues in front of the real Mona Lisa in the Louvre in Paris. 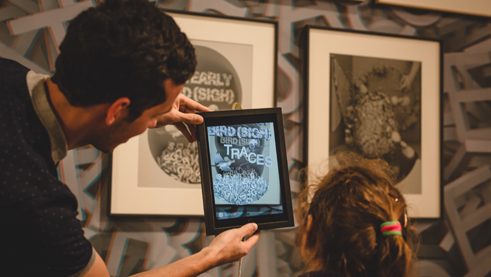 In front of the work “TB – Early Birds AR” by Tim Berresheim | Photo: Fabio Alt In Porto Alegre, the artist Tim Berresheim demonstrates that a reproductive technology can also develop its very own aura. Using complicated calculations, he transferred his 2012 series of drawings “The Early Birds” to a three-dimensional image space that can be controlled using an app. If you stand in front of the large wall in the central exhibition hall wearing 3-D glasses viewing the beak of one of the huge birds, you might think you see the “strange web of space and time” that fascinated Benjamin in his day.

The Power of Replication is a project by the Goethe-Institut Porto Alegre, curated by Gregor Jansen in collaboration with Andreas Schalhorn, Paulo Gomes and Francisco Dalcol. Partners are the MARGS Museu de Arte do Rio Grande do Sul, the Leipzig Baumwollspinnerei, the Institute of the Arts (IA) at the UFRGS (Federal University Rio Grande do Sul), the Pinacoteca Barão de Santo Ângelo of the UFRGS, the Museu do Trabalho Porto Alegre, Vila Flores, Estudio Hybrido and the Paulista São Paulo studio.