Framing the Shot 2018: Key Trends in African Film
Research that was long overdue

I Am Not a Witch | Directed by Rungano Nyoni. Courtesy of Quiddity Films / Clandestine Films / Soda Pictures

The study “Framing the Shot 2018: Key Trends in African Film,” produced in cooperation with the Goethe-Institut and funded by the German Foreign Office, analyses the greatest opportunities and challenges for the fast-changing African film industry. In an interview, Dayo Ogunyemi, founder of 234 Media and director of the study, and Noémie Njangiru, head of the Culture and Development department at the Goethe-Institut Johannesburg, report on the significance of the results for the film industry.

What was the initial spark to conduct the survey?

Dayo Ogunyemi: After 15 years of investing, producing and distributing films across Africa, 234 Media has directly experienced what the lack of data means for our dealings with decision-makers in government, with investors and filmmakers. When the Goethe-Institut approached us to work on this study, we had a clear idea of what would make sense in the marketplace. We already knew that there are hardly any data on the film industries in Africa and surmised that this could reveal great economic potential as well as interesting learning effects.

Noémie Njangiru: It was important to us that it wouldn’t be an academic or philosophical approach, but that hard facts be compiled in this case, aimed at creating commercial value in an African creative sector. 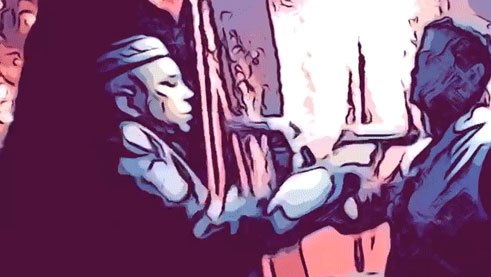 Mayfair | Directed by Sara Blecher. Courtesy of Real Eyes Pictures What significance does the study have for the African film industry, and what kind of response has it had so far?

Dayo Ogunyemi: Based on the response, the study was very well received. Both filmmakers and investors were thrilled to have data and analysis on an industry that was previously quite opaque even to insiders. At the Durban International Film Festival, where we launched the study in July, it sparked heated discussions that continue today. We’ve received some invitations to present or discuss the study at other film and financial events and venues. This will help increase the catalytic effect of the study.

The study speaks of “Africa” as a unit. What were the challenges in summarising different film industries on the continent as one?

Dayo Ogunyemi: Since Africa is made up of more than 50 countries, it’s important to us that Africa is not spoken of as a single entity and to make it clear that these are snapshots of filmmakers and countries that are very different. On the other hand, there are some similarities and new developments between countries, such as the African Free Trade Agreement, which includes provisions for films and other copyrighted products. This agreement underscores the need to analyse and present opportunities for the entire continent. 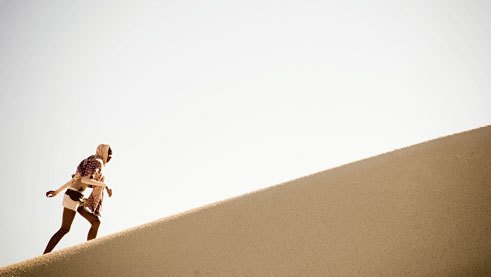 Pumzi | Directed by Wanuri Kahiu. Courtesy of Inspired Minority Pictures Did you look at North African countries such as Egypt, Morocco or Tunisia for this study?

Dayo Ogunyemi: We did not. Although there are long cinema traditions and strong companies in North Africa, the study is aimed at sub-Saharan Africa.

Noémie Njangiru: The approach of first collecting data in sub-Saharan Africa was also based on the fact that it is particularly difficult in this region, especially for many young filmmakers, to find relevant data and to exchange information. The Federal Foreign Office’s focus was also initially on the region of sub-Saharan Africa.

What relevance does the study have for Germany? Should the German film industry invest in African film production companies or co-produce with them?

Dayo Ogunyemi: The film industry is becoming more and more global – both from the production point of view and from that of consumption. From German productions like Babylon Berlin we saw how they move on a broader global platform and saw the strong global impact of likes on Netflix and Amazon Prime. Africa offers unique stories and perspectives, as well as the world’s largest untapped end-consumer market for films, which will grow significantly in the coming decades due to global demographic change.

Noémie Njangiru: It is unfathomable how many high-quality, contemporary African productions remain unseen. The study shows that so far a very major focus has been placed on the production of films, while post-production and distribution of films has not been sufficiently supported. The money, but also the knowledge of possible marketing strategies, distribution channels and audience development are often lacking. For the German film industry as well as for the film industries in Nigeria, South Africa and other African countries, it would therefore be wise to find fair and meaningful ways to unite and meet these partnership obligations early. 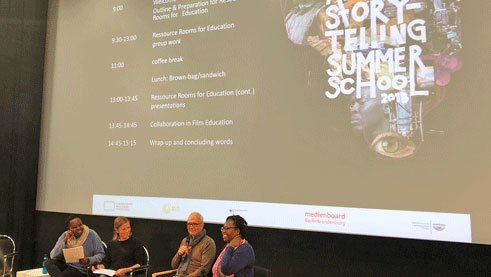 Experts discuss the professionalisation of the film sector during the African Storytelling Summer School | Photo: Noemie Njangiru The creative industries in sub-Saharan Africa have a unique potential to promote economic growth and income opportunities, but also to counteract stereotypes and to make the multitude of contemporary and self-confident narratives from Africa accessible to a new audience. The activities in this field will therefore be further expanded in the future by the Goethe-Institut in sub-Saharan Africa.

The Goethe-Institut Johannesburg has worked closely with filmmakers from South Africa, sub-Saharan Africa and Germany for more than twenty years. The work includes film screenings, festivals, workshops and co-productions, most recently the VR series “New Dimensions.”
From 22 to 26 September, the African Storytelling Summer School was held, conceived by the Goethe-Institut Johannesburg in cooperation with the Filmuniversität Babelsberg and as part of the Film School Network. The aim of the Film School Network is to enrich film education through the exchange of information among twelve film schools from Africa and Germany.