It is an important step for the German-Italian cooperation: In Lyon, the Istituto Italiano di Cultura moved into the premises of the Goethe-Institut after extensive renovations. This is a strong signal against anti-European sentiments and populism. On 23 October, the shared building opened with a ceremony in the French city.

The welcoming words spoken by the director of the Goethe-Instituts in Lyon and Marseille, Dr Joachim Umlauf, set the tone for the evening: “This ceremony is a special and encouraging event.” With the move of the Istituto Italiano di Cultura into the renovated building of the Goethe-Institut in Lyon, two European cultural institutes are working together under one roof. This is not only a clear signal against populism and anti-democracy in Europe for visitors. The other speakers as well as the musical performances on the opening night made it clear that the German-Italian cooperation on French soil stands in deliberate opposition to todays’ pessimistic mood.

More than “sharing a space”

In his speech, the Consul General of Lyon Max Maldacker said, “In times of the Brexit and problems in many countries, this evening can serve as an example.” The collocation between the rivers Rhone and Saône is more than “simply sharing a space,” said his Italian colleague Alberto Bertoni. “Through cooperation, peoples become aware of their essence and at the same time learn to appreciate one another.” 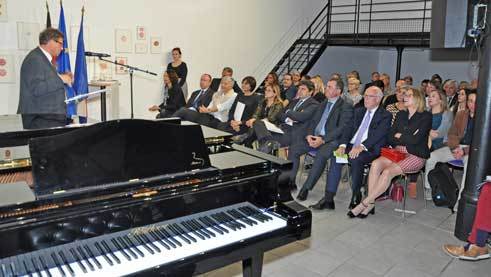 Joachim Umlauf: “This ceremony is a special and encouraging event” | Photo: Tonino Contucci

A promise of peace

The speech by the secretary-general of the Goethe-Institut, Johannes Ebert, who unfortunately could not be present in person, formed the midpoint of the opening ceremony. Susanne Höhn, EU delegate and director of the Brussels Goethe-Institut and the Southwestern Europe region, spoke on his behalf. The collocation in Lyon is “new territory for foreign cultural policy,” she said, which had already been successfully entered on a smaller scale in Strasbourg where the staff of the Goethe-Institut branch office moved into the office of the Italian Cultural Institute. Lyon, as the “most Italian city in France,” is a good place for this more intense cooperation. Her speech spanned an arc from the origins of the European Union to present-day problems. Arising from the ruins of the Second World War, the EU was a promise of peace and prosperity. In order to keep this promise in the face of economic crisis, fears of the future and nationalist tendencies, dialogue and cooperation are more important than ever. The programmes of the two institutes should address young people above all.

In Ebert’s stead, Höhn also brought Goethe’s fascination with Italy to mind and his poem “Ginkgo biloba.” The poet saw the ginkgo leaf he discovered in Italy as an “emblem of friendship” and, in that spirit, the representatives of the Lyon cultural institutes planted a ginkgo tree in the city. Höhn stated, it was planted “as a symbol of our common work, which consists in facing the challenges of today while being ever conscious of our common European cultural heritage.” 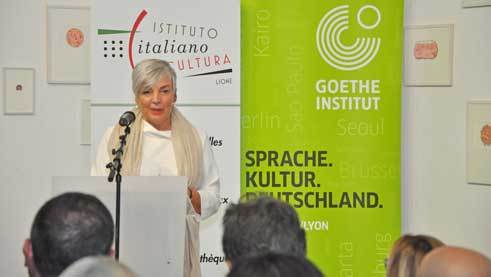 For this purpose, a joint cultural programme is planned in the German-Italian house. With a view to the European elections taking place in 2019, there will be discussions focusing on, among other things, the centenary of women’s right to vote and the question of how to spark enthusiasm for Europe among youth. The two institutes also combined their libraries so that visitors can make use of 13,000 German and Italian media items. “But we will not close ourselves off,” Umlauf promised; for example, a project with Montenegro is planned. “Alongside France, Italy opens up additional access to the Mediterranean region for us.” 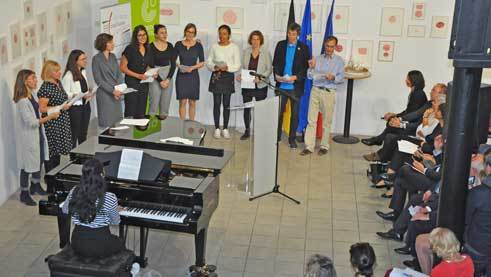 The Goethe-Institut is the Federal Republic of Germany’s cultural institute, active worldwide. With 157 institutes in 98 countries, we promote the study of German abroad, encourage international cultural collaboration and convey an up-to-date image of Germany. Through partnerships with institutions in many other places, the Goethe-Institut has over 1,000 points of contact around the world.