Exhibition Shoa: A Geographical Passion
History is Made

Eight young Ethiopian artists and academics have embarked on an expedition to the Shoa region to juxtapose the Eurocentric image of Ethiopia with their own, contemporary perspective. The results will be presented in an exhibition in which the Goethe-Institut and the Alliance Ethio-Française explore the common European-Ethiopian cultural heritage.

Towards the end of the nineteenth century, Ethiopia, once known as Abyssinia, attracted many European travellers and explorers. During their expeditions, maps, descriptions and photographs of the region were created – documents that are practically the only historical records from this period and therefore extremely important for Ethiopian historiography. However, these documents are still mainly located in Europe and were also created from a European perspective.
In the project Shoa: A Geographical Passion, a group of Ethiopian artists, photographers, historians, geologists and anthropologists have now taken on these testimonies of the past and linked them with their own impressions of the Shoa region. The idea is to give the young artists and academics access to the various materials from the expeditions of that time, and then for them to travel to the region themselves to create their own drawings, photographs and reports. Thus, an exhibition has been created that approaches the region in the highlands of Ethiopia and its history from a contemporary, interdisciplinary and above all Ethiopian perspective. 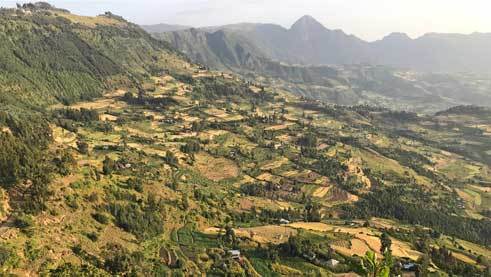 Combination of art and science

The French filmmaker, photographer and curator Hugues Fontaine oversaw the project together with Mifta Zeleke, curator of the Guramayne Art Center in Addis Ababa. Fontaine has been working for many years on the history of photography in the Horn of Africa, with a focus on the late nineteenth century, when King Menelik transformed Abyssinia into a modern nation-state. For him, the combination of art and science was an important aspect of the project. He said, “The group had a wonderful sense of community. Despite different perspectives, the participants spoke the same language and built bridges between their disciplines.” 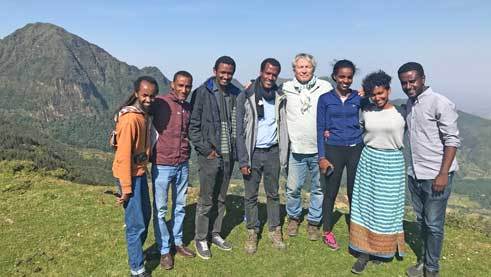 Some of the participants during their journey through the region of Shoa | Photo: Hugues Fontaine They began with a five-day workshop in June, where the group examined historical documents, heard academic lectures, and discussed the Shoa region, historiography, and the use of maps. In October, the curators then travelled to the Shoa region with the five artists and three academics – all of them under the age of 30. The journey took them from the Menangesha Forest to Holeta, Addis Alem, Entoto and finally to the historic city of Ankober for five days. There were no specific requirements for their own artworks, instead the curators were curious about what would arise from the raw material. “We take on the curatorial work, but everything else is in the hands of the participants. It’s like classical music: the conductor makes sure that everyone plays together, but it’s the orchestra that makes the music,” explains Fontaine.

History – from a current perspective

In the scope of the project, Abel Assefa, a historian and archaeologist at Addis Ababa University, was particularly interested in the role of historical travelogues and photographs for the preservation of cultural heritage, explaining, “Because of my work, I’ve read the travelogues of Europeans and visited the historical places several times, so I know the Shoa region very well. The project was a great way to present history from a current perspective.” For him, the contrast between the historical reports and their own impressions during the journey were obvious. Photographer Maheder Haileselassie also sensed this contrast. “After my trip to Ankober,” she said, “I no longer perceived Shoa in a tangible form. I don’t see it in the city or in the countryside. Rather, it is examination, nostalgia – vague and profound, somehow interwoven between the past and the present.” 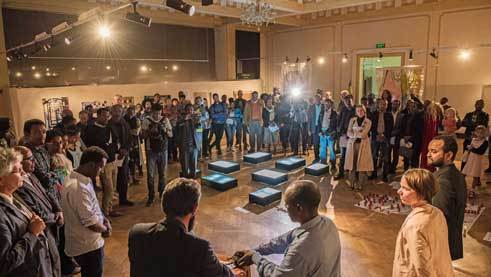 Exhibition opening in the ethnological museum on the campus of Addis Abeba University | Photo: Yero Adugna Etieha The outcome of the project is not a classic exhibition, says Hugues Fontaine, but rather a “visual happening” that amazes the visitors. Going forward, Abel Assefa hopes that the project will also be exhibited in the places it is concerned with. “We should make these documents available to the communities.”

The exhibition Shoa: A Geographical Passion will be on view at the Institute of Ethiopian Studies from 25 October until 25 November 2018. The project is curated by Hugues Fontaine (France) and Mifta Zeleke (Ethiopia). With this project, the Goethe-Institut and the Alliance Ethio-Française explore a common European-Ethiopian cultural heritage. It is funded by the Goethe-Institut and the Alliance Ethio-Française with support from the French Embassy in Ethiopia and the German-French Cultural Fund.