With the series "Museum Conversations" the Goethe-Institutes offer spaces for international academics, museum experts and curators to discuss the future of African museums from a postcolonial perspective. On the 22nd and 23rd of October 2018 in Kinshasa, future exhibition forms have been discussed. We interviewed the curator Nontobeko Ntombela about the position of African museums for the social-political discourse.

How does the museum scene in Johannesburg look like - do the museums reflect current socio-political discourses?

The museum scene is varied and it’s growing because of very recent new museums that have been built or are being built as well. So we have a wide spectrum of museums that show an evolution of positioning of museums in how the role and the responses that they have had socially, culturally, and particularly politically. If you know the history of the older museums going back to the 1800s, you have ethnographic museums combined with sort of internationally focused museums that were there to satisfy or speak to cultures that were European. Over time and with politically changes, these museums would have had to adapt to the context of South Africa and begin to represent more fully the comprehension of South African artists and their diversity. They’ve had to change the narrative, because that was no longer for a kind of European viewing. In the Eighties there was a recognition that this has to change, but obviously because of apartheid didn’t rapidly change until the 1990s. And since then we’ve had a very different vibration of museum in the country. Museums have had to think more sensitively about the human aspects of presenting certain objects to the public. When you talk about human remains, you have to be sensitive to the fact that you are no longer talking about ‚the other‘. So how do you use a language that re-tells the story from an inside perspective. 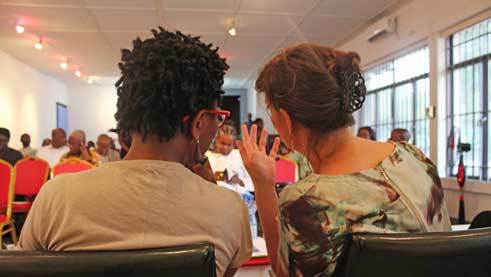 Discussion about the future of African museums | Photo: Nizar Saleh Also interesting is the fact that in the 1990s there was a boom everywhere with history of the struggle narrative. There is this tension between the more historical museums that are supposed to be containing the history of the settler and then we have the new museums which is telling the struggle narrative, which is about how apartheid was overcome. So a lot of the conversation around museums tend to take this position of being more focused from this place of the more historical, ethnographic museums to the more ‚struggle museums‘. And very few times it has taken the position of speaking to art museums.

What role does contemporary art play in society? Does it have the potential to trigger topics such as postcolonialism in social discourse?

A new generation of artists

And I think we are also at a point where we are seeing a new generation of artists. So for the younger artists, there is a lot more space and opportunities. And of course in 1994 there was a big influx of younger artists, black artists having the opportunity and being sought after. Contemporary art was representing how people were talking about their own identities. I think for that moment it was important for people to reflect on what does it mean to be South African at that particular moment. Well, the nature of art being political has changed quite a lot with artists being more experimental with material, being sophisticated with their language in terms of what they are trying to critique and what they are trying to represent in their work. And suddenly South Africa is now in this bigger, broader African discursive space where you have a lot of artists from other cities across Africa represented in South African galleries. There is simply a much broader conversation not only about being South African but about being artist in a kind of global state.

How could cooperation with European museums look like in order to come to terms with the common past?

We are not all coming with the same tools on the table. So the one thing that needs to happen is a real radical shift of consciousness needs to happen to those who are participating – a real awakening. I’m not just saying the person having the money must be the only one who does the work in terms of being conscious about the privileges that take place in those moments, but also partitioners from different regions. My experience is that in some places the situation is really dire and when someone has interest, people almost assume the subordinate, the begging position because that’s the only way they get to advance their desperate situation. And so it’s important that in any form of collaboration these kind of conversations are important to have. A demand of criticality is the first thing that should happen in any kind of collaboration, from all parties. And people should be open to having their biases exposed. 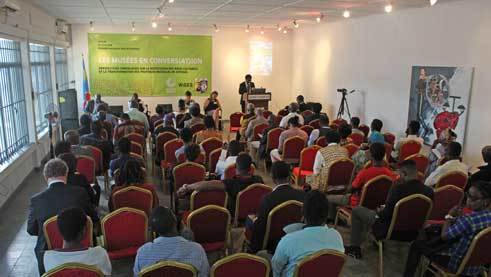 The exhibition as an ongoing dialogue

How can these politically complex contents be presented in an exhibition?

I think it is important that exhibitions are thought outside of being conclusive and being an end goal, but rather how they are a process and long, ongoing conversations. And maybe the exhibition needs not to be the first format, but exhibitions need to be informed by former, smaller interventions. For instance, the project I’m doing with WAZA [centre d’art, Lubumbashi] is based on the interest of how cultural materials of congolese material have found themselves in South Africa and how you begin to ask questions around that. So we use many different methods like residencies, partly by inviting artists to speak to this or engaging communities to come back and criticize or speak to these objects. The critical part for us is being about creating a space where smaller interventions and processes are actually consciously integrated in informing the exhibition. The sincerity of a project is a crucial point, namely the integration of locality, that is engaging voices is a very important factor.

The "Museum Conversations" are a series of projects run by the Goethe-Institutes in Sub-Saharan Africa and take place at the participating locations in cooperation with local national museums, museums associations ministries and UNESCO. They offer space for the initiation of an inner African discourse.

Nontobeko Ntombela is a curator based in Johannesburg. She currently works at the Wits School of Arts developing the postgraduate programs in curatorial and exhibition practices. She previously worked as the curator of the contemporary collection at the Johannesburg Art Gallery (2010–12) and the Durban Institute of Technology Art Gallery (2006–10).