bauhaus imaginista in Lagos
A Sort of Tropic Modernism

Architects and scientists at the symposium "Decolonizing the Campus" in Lagos | Photo: Jeremiah Ikongio

At the Decolonizing the Campus symposium in Lagos, numerous local and international architects will take a critical look at design theory and university buildings from the early and transitional years of Nigerian independence as part of bauhaus imaginista. The focus of the discussion is Obafemi Awolowo University in Nigeria, which was founded in 1961 in protest against British education policies at the end of colonial rule.

Only four hours apart by bus, the contrast could hardly be greater between Lagos and the university campus in Ife. While overcrowded, but extremely lively Lagos with its 18 million inhabitants and its broken infrastructure is considered one of the continent’s toughest cities, the university is green oasis: quiet, with many spaces to retreat to and plenty of room to study. Thirty-five thousand students from almost all disciplines are enrolled here, including architecture of course, it being the first complete faculty of its kind after Nigeria’s independence in the 1960s. At the beginning, mainly Europeans taught here, today the teachers are “all black,” as Ife professor Dolapo Amole emphasised at the symposium in Lagos. Maybe the title “Decolonizing the Campus” became clearer at this point.

Discussion about the architecture and impact of the university building | Photo: Jeremiah Ikongio

A symbol of independence

One thing is certain: this University of Ife campus is also a project of self-assertion, a symbol of independence, a sign of liberation from the colonial era. Even if one could argue that a Western architect built this campus, the Israeli Arieh Sharon is by no means considered an outsider. Even back then, he was seen as the representative of a country that won independence from the British during the Mandate era. In addition, Sharon was one of the most important architects in the country, who planned dozens of cities and hundreds of villages after the founding of Israel and was well versed in building completely new structures. Sharon had learned his trade in the late Bauhaus in the late 1920s in Dessau under Hannes Meyer. That was no longer the aesthetic, delicate style of the early Bauhaus years, but was “industrial: expansive, systematic, functional,” as Israeli architect Zvi Efrat emphasised at the symposium. Sharon allowed modernism to come into its own in the tropics with multi-level concrete structures, bridges, squares and auditoriums. 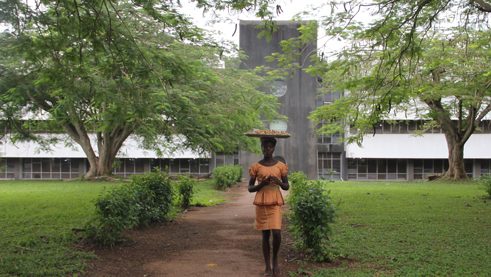 Building in the tropics

What the Bauhaus disciple built here as his life’s work over 20 years is a sort of tropical modernism. The greatest challenge for building in the tropics is the weather: humid and hot, the sun is merciless. Theoretically, a power plant would be needed to produce artificial air conditioning on such a large campus. But Sharon did without that. Most of the seminar rooms and lecture theatres have no windows. The spaces are cooled by means of a chimney effect: Many buildings have an elongated, open atrium at the centre while the ground floor is mostly open, creating a natural draft that cools down in the building and makes studying in the tropics possible. The second challenge besides the hot air is the sun. For that, Sharon simply made the buildings wider at the top so that the upper floors offer shade to the lower.
Sharon perfected building in the tropics. The South African architect Hannah le Roux emphasised how he understood buildings not as artificial constructs, but as a “second skin.” Anyone who moves around the campus can see that it works! No modernist fatigue as so often in the West, but natural utilisation even if the campus buildings may need a brush-up here and there. Unfortunately, modernism doesn’t age so beautifully. While visiting the campus, German and Nigerian representatives agreed to launch an initiative to put this site on the UNESCO World Heritage List. 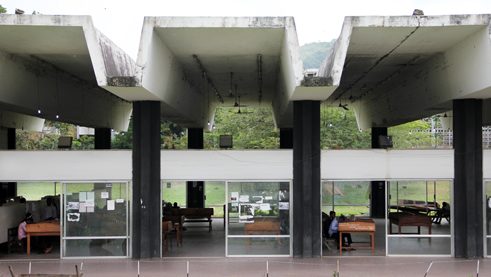 Building in the tropics – a great challenge | Photo: Keren Kuenberg

With Nigeria, the Bauhaus’s anniversary caravan has travelled to one of the most extraordinary places on which the Bauhaus left its mark. And the beautiful thing here, as in Japan, in Brazil and Morocco, is that the bauhaus imaginista project has nothing to do with the promotion of Western exports by a legendary design school, but does time-consuming research on site: deeply involved in the local structures, curious about what Bauhaus means in each country, but also a collection of everything that had a reciprocal effect on the Bauhaus. Not least, it also highlights the political dimension of the Bauhaus, which automatically implies moving away from a purely European perspective.

Following the traces of Bauhaus in an extraordinary place | Photo: Keren Kuenberg

bauhaus imaginista is a collaboration between the Bauhaus Kooperation, the Goethe-Institut and Haus der Kulturen der Welt (HKW). The research project with various exhibition stations is part of the centenary of the founding of Bauhaus (2019). It is made possible by funds from the Federal Government Commissioner for Culture and the Media (BKM). The Federal Cultural Foundation (KSB) supports the exhibition in Berlin, the Foreign Office supports the international stations.
On 23 & 24 November 2018, bauhaus imaginista: Moving Away, Decolonizing the Campus (Symposium), Goethe-Institut Nigeria, Gallery 16/16, Department of Architecture at the University of Lagos and Obafemi Awolowo University, Osun State, Nigeria.