The symposium in New Delhi explores the Bauhau’s to educational movements in the Indian subcontinent. | Photo: Tribhuwan Sharma

The symposium "Moving Away - Bauhaus Pedagogy" in New Delhi focused on Bauhaus pedagogy and its connection to other important educational concepts of the 20th century. With the involvement of local research, experts dealt with art, design and architecture on the Indian subcontinent.

The first Bauhaus exhibition didn’t take place in Germany, but in Calcutta, India, in 1922. That year, works by Bauhaus masters such as Paul Klee and Johannes Itten were shown beside artists of the Bengal School, including Nandalal Bose and Gaganendranath Tagore, who at the time were developing an Indian modernism that turned away from representational art making and Western colonial models alike. Some of these Bengali artists were affiliated with Rabindranath Tagore’s experimental school in Shantiniketan, which was founded the same year as the Bauhaus, in 1919. 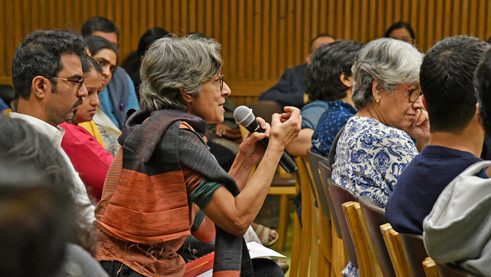 The topic of Bauhaus Pedagogy attracts an interested audience to the symposium in New Delhi | Photo: Tribhuwan Sharma

Pedagogy at the focus of Bauhaus research

In early December, the interdisciplinary project ‘Bauhaus Imaginista’ hosted a symposium in New Delhi exploring the Bauhau’s links to educational movements in the Indian subcontinent. ‘How can you take a transnational view of the Bauhaus and its legacy?’ This was the question asked by Grant Watson, artistic co-director of ‘Bauhaus Imaginista’, in his opening remarks at the symposium ‘Moving Away: Bauhaus Pedagogy’ in New Delhi. The symposium featured international art historians, designers, artists and educators reflecting upon the Bauhaus’s relationship to South Asian education, architecture and design. In her introductory remarks, art historian Kathleen James Chakraborty noted that the next wave of innovation in Bauhaus related research will focus above all on pedagogy – the way in which educators fostered their ideas to subsequent generations of students. 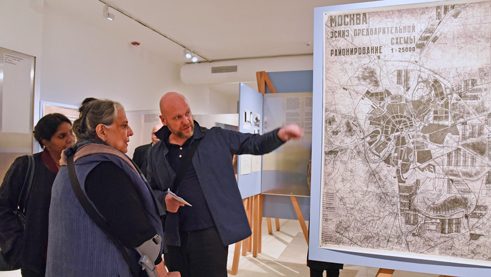 Exchange between the participants at the symposium "Moving Away - Bauhaus Pedagogy" | Photo: Tribhuwan Sharma

The symposium focused on three schools in the Indian subcontinent that had links to the Bauhaus: Kala Bhavan Skantiniketan, a school founded – like the Bauhaus – in 1919, by the polymath Bengali poet and educator Rabindranath Tagore, the MSU Baroda and the National Institute of Design (NDI) in Ahmedabad. Anshuman Dasgupta, a researcher and professor based in Skantiniketan, explored the history of intellectual, political and artistic exchanges at Kala Bhavan Skantiniketan. Dasgupta quoted a 1921 letter from Tagore to William Rothenstein, a British artist and arts administrator who spent time in India, in which Tagore accounts for the idea that led to Kala Bhavan. Tagore wrote: ‘I made use of a western word, university… but I shall not allow his idea to be pinned to word like a dead butterfly in a foreign museum’. Indian art historian Geeta Kapur, a giant of Indian art history, responded to these histories with an account of Indian artist Kalpathi Ganpathi Subramanyan. Reading Tagore’s exchange with Mahatma Gandhi, Kapoor examined their attempts to wrestle an autonomous, intellectual Indian art history detached from Western-influenced colonial models. 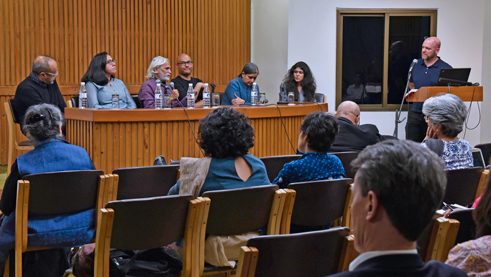 Later, the symposium took a turn to focus on current practices of design, urbanism and architecture, showing how this diverse spectrum of ideas finds its way into practice today. Speakers included the NDI’s former chairman of education S. Balaram, and two former NDI students, well-known Indian fashion and textile designers David Abraham and Mayank Mansingh Kaul. The day concluded with the architecture and urbanism research of Kazi Khaleed Ashraf and Saif Ul Haquefrom. Each showed how Bauhaus teachings, and their cosmopolitan reality, are well alive today.

The symposium "Moving Away: Bauhaus Pedagogy" took place at the India International Centre and was organized by Marion von Osten and Grant Watson in cooperation with Suchitra Balasubrahmanyan, Anshuman Dasgupta, Natasha Ginwalla and the Goethe-Institut / Max Mueller Bhavan New Delhi. It is part of the overall project "bauhaus imaginista", which is a collaboration between the Bauhaus Kooperation Berlin Dessau Weimar, the Goethe-Institut and the Haus der Kulturen der Welt, Berlin (HKW).