The Freiraum project is a grassroots movement that aims to build bridges. In 42 cities, Goethe-Instituts and their partners from culture and civil society are addressing questions about Europe. The Carlisle-Thessaloniki city tandem is grappling with the questions: How can isolation be overcome? How can identity become a free space? The focus is on discussions with the residents of both cities.

The duo: AWAZ Cumbria and ArtBOX

More than 3,200 kilometres separate Carlisle in England’s northwest near the Scottish border and the Greek port of Thessaloniki. Aftab Khan shows the distance on Google Maps. He’s the director of AWAZ Cumbria, a community development organisation that has been working since 2005 to increase the visibility of marginalised groups in the county. Its Greek partner could hardly be more different: ArtBOX is an art management agency. What connects the two cities and organisations? Nothing at first glance. But in the Freiraum project by the Goethe-Institut, they’re growing together a bit. 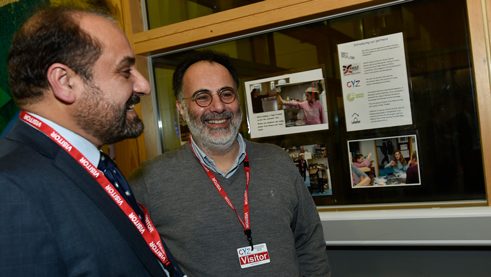 Chance brought them together. At the first Freiraum meeting in Warsaw in December 2017, the tandems were decided by drawing lots. Just over a year later, the participants from Greece and England gather in Carlisle to show what they have been working on since. They met five times in England and in Greece. They held 24 Skype conferences and 400 phone calls and nearly a thousand e-mails went back and forth. Twelve artists are conducting the exchange, more than eighty poets and singers are involved. This Saturday, they gather at Carlisle University for a SpeakEasy. Pupils, students, refugees, old and young, women and men go on stage to take the microphone, read poems, some only a few lines long, or sing. In between, there is a live video to Greece, where artists read plays. 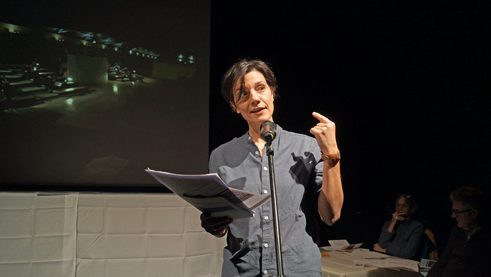 The journalist and translator Krystalli Glyniadakis at the SpeakEasy | Photo: Isabel Stettin

“No walls between the people of Europe”

Among the spectators is Johannes Ebert, secretary-general of the Goethe-Institut. It’s no coincidence that he chose this place for a visit. The Brexit was the trigger, the impetus for the Freiraum project, says Ebert. “The decision to go with the project came after the vote in the UK and the election of Donald Trump in the US.” He also sees it as a reaction to the rise of populist parties across Europe. Here in Carlisle, 61 percent voted in favour of leaving the EU. The small town became famous because the “Leave” supporters were more strongly represented here than anywhere else. “Even if we leave the EU, we’re not leaving this continent. No matter what happens, we don’t want barriers and walls between the people of Europe,” says Aftab Khan. But he also knows that many people here feel abandoned, trapped between Scotland and England in the no-man’s-land of the border city, neglected by big politics, ignored by London. That’s how many feel here. 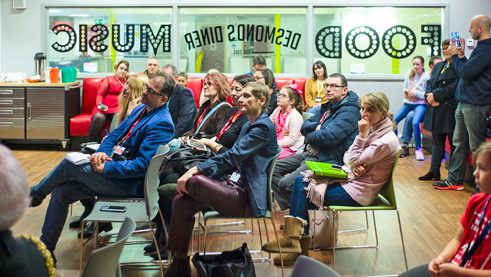 How can isolation be overcome? How can identity become a free space? | Photo: Linda Bussey

Freiraum was only the beginning

“How can we understand isolation and how can we overcome it?” is therefore one of the questions the project participants are asking. They are almost philosophical thoughts, which the children of the Youth Zone in Carlisle and children from Thessaloniki also dealt with. Many of the children who come to the youth centre to play football or learn come from disadvantaged families. They painted pictures, made collages on the topic of loneliness, built tree houses as symbols of retreat. In short videos, the children from Carlisle raise their hand for a high-five, connecting with children from Thessaloniki despite the distance between them. The small exhibition of paintings from England and Greece is just a tiny snippet, a mosaic of many projects that artists in both cities have implemented together with the residents. Jane Dudman, artist and curator of the project, is planning an exhibition in Carlisle in February. But it won’t be just that one spark, she explains, “Freiraum has set a pebble in motion. Now it’s up to us to keep it rolling.” 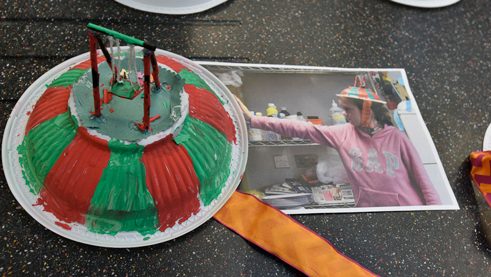 Freiraum is a project by the Goethe-Instituts in Europe in cooperation with 53 actors from culture, science and civil society. Until March 2019, around 40 European cities will explore the questions: What is freedom in Europe today? Where is it endangered? How do we strengthen it?