Symposium in Weimar: “How robust is our fundamental liberal order?”
“Democracies are not self-sustaining systems”

“How robust is our fundamental liberal order?”, symposium on the future of democratic constitutions in Weimar | Photo: Thomas Müller

Asking the question “How robust is our fundamental liberal order?” the Deutsches Nationaltheater Weimar, the Goethe-Institut and the Dramaturgische Gesellschaft invited international experts to a discussion about the Weimar Constitution and the fragility of our democracy.

Are any political systems robust? The opening question asked by retired Bundestag President Norbert Lammert is one of the central questions of the symposium. The year 2019 not only marks the anniversary of the Weimar Constitution, but also the 70th anniversary of the Basic Law, which, Lammert pointed out, has lasted considerably longer than Germany’s first attempt at a constitution. The Basic Law was devised as a provisional solution, while Weimar Constitution was intended as permanent. That turned out to be a fallacy, for the Weimar Coconstitution lasted only 14 years. National Socialism brought anti-constitutional forces to power. Lammert considers this “alarmingly relevant” chiefly due to a hypothesis laid out in the US study How Democracies Die. “In the past, democracies were overthrown. Today democracies die not in coups or civil wars, but through election results,” he noted. A democracy can erode without infringements of the wording of a constitution, he continued, “The latest developments in the US, Hungary, Romania, Poland, Italy and Germany are at least indicative that democracies are not self-sustaining systems.” 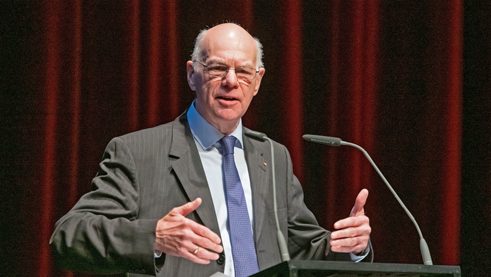 The impact of the Weimar Constitution

Secretary-general of the Goethe-Institut Johannes Ebert emphasised its international reception, saying, “The Weimar Constitution developed influence and impact far beyond Germany. The tension between the demands of state security requirements and personal and freedom rights continues to be highly relevant today. In this country, but especially where the asset of protected public life taken for granted, the Goethe-Institut is in demand as a dialogue and discussion partner. That’s why we bring voices from Turkey, Spain, Brazil and Germany together and, with our international expertise, contribute to reflection and to the discourse on the future of democracy in Germany as well.” 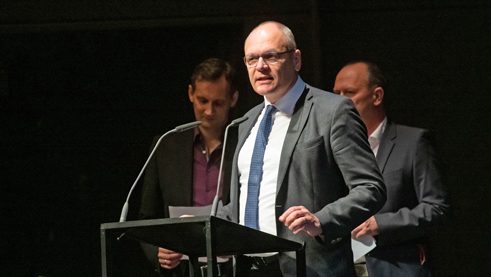 Johannes Ebert, Secretary General of the Goethe-Institut, talks about the impact of the Weimar Constitution | Photo: Thomas Müller

Opportunities and threats of the Weimar Constitution

During the subsequent discussion, moderator Martin Sabrow, director of the Centre for Contemporary History Potsdam, asked participants why Weimar is suddenly fascinating to us once again. Is it a comparison with 1933’s signs of hysteria or are we under a real threat at a time when Europe’s narrative is no longer a firm anchor but a prevailing narrative of fragile democracy? Ece Göztepe Çelebi, professor of constitutional law at Bilkent Üniversitesi in Ankara, believes it is a misconception that conditions such as those in 1933 will be identically repeated, noting, “There will never be concentration camps on German soil again, but there are refugee camps in North Africa today.” For her, the quality of German democracy is based, for instance, on the fact that policy is made at local, state and federal level. Parties can govern together at the local level that do not at the federal level. The advantage of this is that they are able to unite pragmatically. Pablo Holmes, professor of political and constitutional theory at the Universidade de Brasilia, lamented the current crisis in his homeland, stressing that constitutional texts in his country have long been disregarded. “There have been moments when fundamental rights were ignored,” he stated. He criticised the corruption scandals in the political system of his country. For Fernando Vallespín Oña, professor of political science at the Universidad Autónoma in Madrid, Weimar’s most interesting aspect was not its constitution, but that it was a golden age for art and literature, noting, “There was something going on in European civilisation,” although the European soul was split then as it is now. He sees it as a contemporary dialectic. “There are cosmopolitans and those who only feel satisfied within a national identity.” 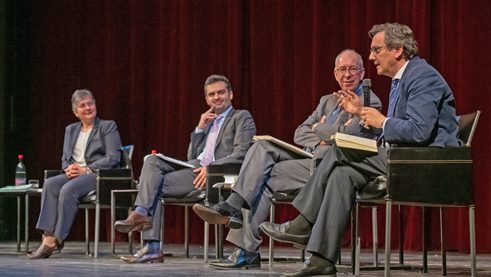 The participants also discussed the challenges posed by populism in many countries. Fernando Vallespín Oña mentioned that there was no right-wing populist party in Spain six months ago, but “Now we’ve got one.” The populists’ problem is that they simplify everything, he remarked, “But we live in a highly complex society that cannot be controlled by the nation-state.” For Pablo Holmes, right-wing populists cannot deliver what they promise, but stand instead for inflationary hypocrisy. Hence strengthening civil society is one possible solution.

The symposium The Weimar Constitution – An Impulse for Current International Debates is an event organised by the Goethe-Institut in cooperation with the Deutsches Nationaltheater Weimar and the Dramaturgische Gesellschaft as part of the Week of Democracy.