Freedom goes through the stomach. The project Freiraum presents its results on the state of freedom in Europe from 12-17 March in Berlin | Photo: Anja Weber

At around 40 locations in Europe, the Goethe-Institut’s Freiraum project is bringing partners from culture and civil society together to talk. In tandems from two cities each, they explored the question of what freedom means to them and where it is in danger. Together with the Center for Art and Urbanistics and the Stiftung Mercator, selected Freiraum tandems are now showing the results of their exchange in Berlin.

Carlisle in northern England and the Skopje, Macedonia are over 3,000 kilometres apart. They are dissimilar cities but they also have a lot in common because both are part of the European continent. At the opening of the Freiraum festival at the Center for Art and Urbanistics in Berlin Johannes Ebert, the secretary-general of the Goethe-Institut, remembers a journey that took him to both cities last year. Today the values ​​of Europe are diversity, tolerance and freedom, he emphasises, but there is still a lot that needs to be done. In many countries it had seemed that nationalism and beliefs in their superiority were long past. Now they are an urgent problem in the European Union. The numerous partnerships between the Freiraum partners are an example of what lived coexistence looks like in Europe and how we can counteract the drifting apart of countries. Freiraum wants to explore how freedom is doing in Europe’s cities. The project started in 2017 and lead to a three-day conference in Berlin where the partners exchange ideas and present their projects. 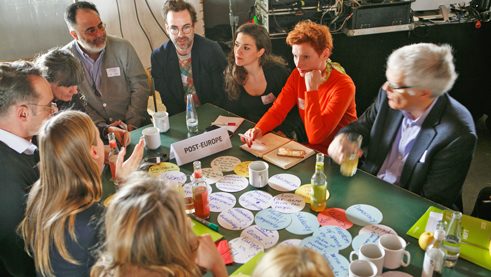 At the network meeting, the Goethe-Instituts and their partners discuss the five Freiraum-topics | Photo: Anja Weber

“Young people need to create their own narratives”

The conference began with a discussion about looking for possible narratives for what Europe currently constitutes. The director Britt Beyer shot the documentary 24 Stunden Europa by following 66 protagonists from 26 countries with a camera. She also shows right-wing teenagers in her film because she considers it very important to bring different people together, explaining, “Art should try to change the world, even if it’s done in tiny steps.” Johannes Ebert endorses the concept of the film as it is the only we can talk about Europe. A manifesto written by artists and intellectuals six years ago on behalf of the then EU Commission President Barroso meant to offer a new narrative for Europe wouldn’t have worked because a project like that has to come from the experiences of the people. He is convinced, “We have to create conditions so that young people can create their own narratives.” This is an approach that Freiraum puts into practice. Art in particular can open up perspectives that are not achievable through politics. Ebert considers it inappropriate to establish a concept of a European core culture. “That would create a new fortress. We shouldn’t make that mistake.” 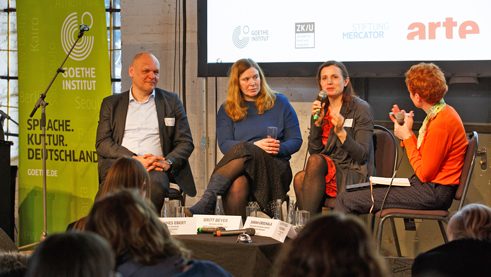 Pro-Europeans are an endangered species

Britt Beyer is sceptical whether networking actors in art and culture might actually be a solution. It would merely create echo chambers with everyone in their own group and leave others on the outside. There are people in Europe who have no voice, she admonished. Beyer considers civil rights and the freedom of the press the most important European values. British playwright Sarah Grochala said freedom, opportunities and security are the three central concepts she associates with Europe. She regrets that many people in her homeland have forgotten that the EU was once founded to prevent military conflict. As a pro-European intellectual in the UK, she presently feels like an endangered species. Moderator Katarzyna Wielga-Skolimowska, assistant to the head of the cultural department at the Goethe-Institut Munich, critically questioned whether we really live by these values ​​and shouldn’t do more. “We have to reflect our behaviour,” said Ebert. This is something that is also being realised at the numerous events of Freiraum in Berlin. 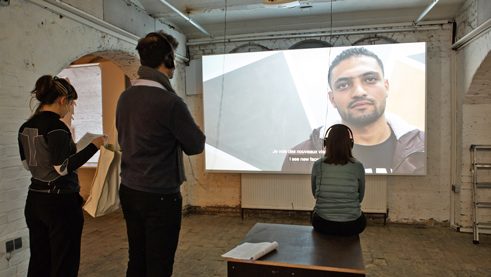 A film by the "Freiraum" tandem Marseille-Prague is presented at ZKU | Photo: Anja Weber
Freiraum in Berlin is an event in cooperation with the ZK/U – Center for Art and Urbanistics and is funded by the Stiftung Mercator. ARTE, tageszeitung and rbb Kulturradio are the media partners.

"Freiraum in Berlin" is the prelude to the second phase of the "Freiraum" project, in which the Europe-wide network of partners from culture and civil society will be strengthened and expanded.