Leipzig Book Fair: “Rules of thumb and skinned knees. What is the up-and-coming generation writing about?”
“It’s hard for me to locate myself”

“Rules of thumb and skinned knees. What is the up-and-coming generation writing about?” -at the Leipzig Book Fair. | Photo: Stefan Hoyer

A man who chopped off one of his thumbs: that’s the bizarre fellow that Ana and Monica, the two heroines in Iva Brdar’s Rule of Thumb meet. The play is a surreal road movie in which two women hitchhike from a small town in Sweden to the Bulgarian border. Along the way they set themselves so-called “rules of thumb,” celebrating the journey like a competition: money is taboo, they sleep in a tent every night and as soon as a situation makes them feel uneasy, they run. Brda sees her play as a statement on the present disparate situation in Eastern Europe.

Klaus-Dieter Lehmann reveals that he is a soul mate of Iva’s heroines, having himself hitchhiked to Morocco and Yugoslavia as a young man. “Germany was excluded from the international community because of the crimes of the Nazis,” he explains, “but we young people wanted to change that situation. In France, they called me ‘boche.’” But there were also opportunities to meet people and there was differentiation, he goes on, “The locals made a distinction between people and governments.” 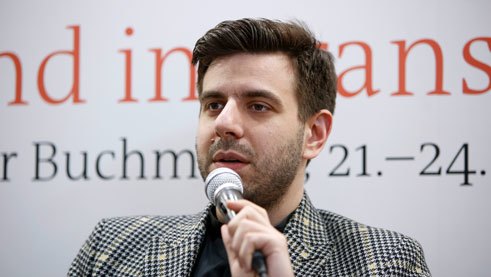 “The view from below is more substantial”

Dino Pešut set his novel Aufgeschürfte Knie (Skinned Knees) in Berlin where he lives. It’s about a Croatian artist living in Berlin who is actually an actor but makes a living illustrating children’s books. He enters into various homosexual relationships and finally becomes involved in a rampage. Pešut incorporated many autobiographical experiences in his novel. When asked how he defines his position as a Croatian, queer author in Berlin, he replies, “It’s hard for me to locate myself. Berlin is the political and cultural centre of the whole western world and it’s not easy to position yourself there.”

Asked by moderator Jürgen Jakob Becker of the Literarische Colloquium Berlin whether he feels differently as an author in Berlin and in Zagreb, or perhaps perceives himself in Berlin as an unknown writer, Pešut replies that he perceives himself quite differently in the two cities because, “First and foremost, I’m a lower middle class migrant who came to Berlin. In Zagreb, I belong to the middle class.” This “class downsizing” can make a person feel quite depressed, but “the view from below is more substantial for working as a writer.” Brda sees it a little differently, saying, “I’m not below or above, but more in the middle.”

Do Brdar and Pešut experience restrictions to their freedom in Croatia and Serbia? “Formally, there’s no censorship, although I was lucky with my editor, but as an author you’re subject to the dictates of the market, so I find it difficult to speak of writer’s autonomy,” says Pešut. Brdar perceives no open censorship for writers in Serbia, but a different kind of censorship, for instance in the theatre, which financially relies on the state and thus is entangled in dependencies. 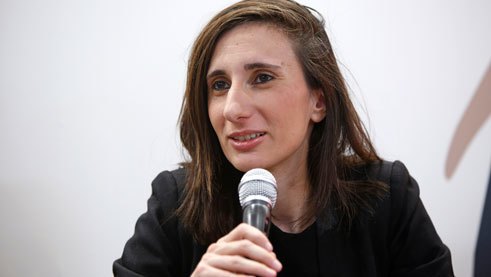 Like their protagonists, Pešut and Brdar are seekers who left their homeland to settle as authors in Berlin. But Lehmann emphasised that we can’t take the risk that all artists who think in new ways relocate to enrich Berlin. The Goethe-Institut is therefore trying to create a discourse in smaller towns and remote places, and especially in Eastern Europe it wants to ensure there are protected spaces for persecuted authors. For example, for the project Daring to Remember about two dozen authors from Kosovo, Albania and Slovenia travelled through the Balkan countries. This is a way to create a discourse in countries that have fallen into “speechlessness.”