“The Cabinet” in Poland
Come in, we’re open!

Visitors in front of the Caligari exhibition | Photo: Jakub Tabaczek

Come closer. “The Cabinet” is a container installation by the Goethe-Institut Warsaw that virtually transports the audience into Robert Wiene’s classic silent film The Cabinet of Dr Caligari. After three weeks and nearly 3,000 visitors in front of Warsaw’s Nowy Teatr, the container installation and its volumetric, “walk in” movie has now travelled on to Wroclaw.

The Cabinet of Dr Caligari is a masterpiece of Expressionist film. The thesis borne in the title of Siegfried Kracauer’s book From Caligari to Hitler (1947) is almost as famous as the film itself: Doctor Caligari, according to Kracauer, embodies the mad tyrant whose subjects carry out his will with joyful obedience. Caligari is the forerunner of Hitler; Hitler is the revenant of Caligari: Kracauer’s interpretation is controversial, but follows Robert Wiene’s film like a shadow.

The Dream of Cesare – a volumetric film

The centenary of the Caligari film is also the 100th anniversary of the epochal year of 1919, the year of the Weimar Republic and Bauhaus, so the apt time to commemorate the classic film and its era. Two ideas were united here. One is a virtual reality experience in the form of the five-minute volumetric film The Dream of Cesare, which the Goethe-Institut had specially produced by UFA X in Babelsberg. Volumetric film, a very young technology, allows viewers to move in a three-dimensional, virtual space thanks to 3D human body reconstruction. The film becomes “walkable” and in it, the audience meets two well-known Polish actors, Arkadiusz Jakubik as Caligari and Jakub Gierszał as his medium Cesare.

Neo-Expressionist murals by the artists Zdislaw Nitka and Eugeniusz Minciel | Photo: Jakub Tabaczek From one fair to the next

The second idea was the containers: a revisiting of Caligari’s cabinet, now as a walk-in installation of exhibits complemented by a small cinema space for the original and the volumetric film. The cabinet is reminiscent of a fair attraction, which – like a ghost train – doesn’t directly inform its visitors what awaits them. The interior of the container reflects the spirit of the original set design with neo-Expressionist murals by Zdislaw Nitka and Eugeniusz Minciel and with broken Cubist perspectives.

The first stop in Warsaw proved the effects of the attraction. The cabinet piqued the curiosity of passers-by, families, children, cineastes and non-cineastes. Some were attracted by the volumetric film, but many also wanted to see the complete original in the well-attended container cinema. Many would have been happy if “The Cabinet” had stayed around longer, but the point is for the containers to move from one fairground to the next.

„The Cabinet“ was well attended in Warsaw. Now it is moving on | Photo: Jakub Tabaczek

To the Berlinale in Berlin

Now “The Cabinet” is stopping in Wroclaw, where it will stand opposite the famous Centennial Hall of 1913 until the end of August. From there it will move on to Poznan and Krakow and, in 2020, to the Berlinale in Berlin, the place where Robert Wiene’s silent film The Cabinet of Dr Caligari premiered in February 1920. 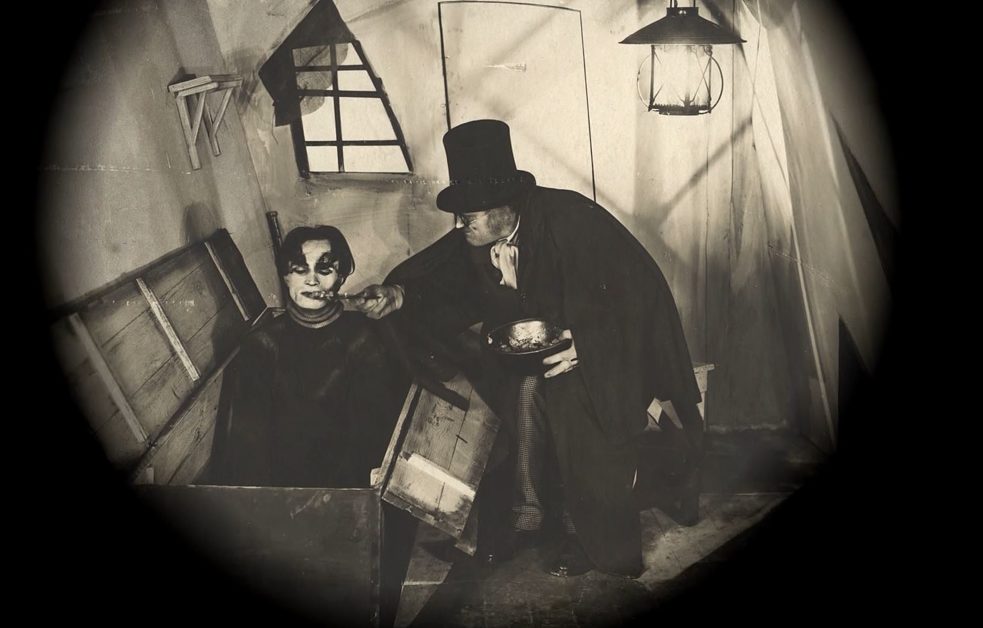