The white, modern building landscape is set amidst wide, dry, rocky hills. It feels alien, but maybe it’s an oasis for those who live here. Perhaps they are forced to live here.

This place is called an institution and its residents are dwarves. Staff and tutors are dwarves. There is also a school director we never see. One day, the director and several tutors are not present. Only the horde of dwarves, a tutor, the cook Marcella, and the two blind dwarves Azúcar and Chicklets are present. The horde uses the situation to take action. A character named Territory chases Marcella on a motorcycle until she gets scared and hides in Lava Fields, a rocky hill. Meanwhile, the others are trying to attack the tutor. Pepe is one of them and gets caught. He is taken hostage in the director’s room. Outside, the horde demands that the tutor release Pepe immediately, otherwise they will set the institution on fire. The tutor tries to phone for help but the phone cable has been damaged. His last hope is that the school director comes back early that day.

The landscape and the performativity of its residents

This is more or less the structure of events. The relationship of the horde’s action to life in the institute is illustrated by the landscape and the performativity of the subject. The expression of the subject becomes language to bring about certain events. One of these is the disgust the horde feels when it has to fulfill its routine task of watering the plants, despite the broad dry area of the location. In the end, this disgust is mollified by burning the plants, including the director’s favorite palm tree, which is uprooted and set on fire. This action is, for me, one of the most performative scenes; it shows how the expression “to fell a tree” seems to be a sign that the situation in the institution has changed.

The temporary absence of the school director is sufficient to make a difference. I wonder why this character is not shown. Perhaps because he is not a dwarf. This assumption is supported by the scene in which Hombre is interrogated by a security officer who does not appear visually on the screen. We only hear his voice, which does not seem be the voice of a dwarf. If that’s the case, Herzog meticulously prevents the presence of a “body that is not a dwarf” from penetrating the landscape of this film. In fact, everything that comes from the outside, if it comes in, has to be adapted, as in the scene where a driver passes the institution and asks for directions. The driver is also a dwarf.

Interestingly, the “body that is not a dwarf” is then represented in a spatial situation that is related to a functional disorder. For example, the institution’s architecture is not suitable for dwarves in terms of user experience design—a door knob that is high and hard to reach, a bed that is difficult to climb onto. This situation seems to impose the design principle that the form determines the action of the subject. It is different when function and meaning are first assigned to the form. Modern products, for instance, are designed based on the function (form follows function).

When Hombre tries to get into bed after his wedding, it’s about two things. First, he repeatedly fails because the bed was not built for “them” (the dwarves). Second, he cannot (intentionally) get into bed because he wants to avoid consummating the marriage. I suspect he would have made it up on the second try if he had used the ornamental frame in front of the bed to help him. These two issues force a function that follows the form when Hombre reacts to the abstract form of the bed (using the ornamental frame as a ladder) and performative (which makes the result of his action an excuse not to consummate).

The sticks of Azúcar-Chicklets also show how the function follows form. The stick does not stand for a particular function, but it is events and spaces that determine the function of the sticks, namely to navigate the space or for the blind twins to use them as weapons to defend themselves when they are attacked. The principle that form follows function is clearly demonstrated in the Azúcar-Chicklets rope installation. The rope is used to help the two explore the space, but at the same time their rotation area is limited. The placement of these two design principles on space and events in the film discusses on a political level what “function” looks like when something is released and when something is predetermined. That is to say, essentially every object is only an impartial form until it receives a function and a value.

Regulated and orderly, both inside and outside

The notion of space “inside” and “outside” also seems to reflect the construction of the events in the film. This is illustrated by the existence of the subject and the impressions it generates, starting with Hombre’s interrogation in the police station when he is accused of committing a breach of order in the institution. This continues with the scene in which the tutor holds Pepe hostage in the school director’s room. He reminds Pepe of the institutional guidelines: “cleanliness and order”. The situation illustrates how life in the institution is arranged and regulated by certain forces. Perhaps the same thing happens to the insects that are put into a horde dwarf’s box. The insects are fixed and arranged to play a role. An accumulation of events takes place in this space that gives the impression of control and power. The director’s room, the interrogation room, and the tiny space in the box all function as space to “confine” in Herzog’s film.

The situation is different when the subject is outside the space. The events that occur are mostly speculative and tend to be natural. The action of the dwarf horde is not a solution to the problem at hand in the institution; rather the action plays out the possibilities of the space, as when plants are burned, cars thrown into canyons, and when the twins Azúcar and Chicklets are attacked. The tutor also uses a similar measure: his anger at the horde is vented on a tree.

In the end, the film uses the landscape as an event structure. The landscape is structured by the performativity of its subjects to space and the performativity of space to its subjects. The space is influenced and the space takes influence. Space in this context can also be interpreted as form, enabling space to be read through functional design principles. The topic of function becomes important when talking about relationships. In the landscape of Herzog’s film, these relationships become a map of events between subjects and their spaces. The relationship between man and space is thus represented by a designed landscape. 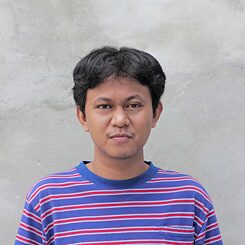 © Taufiqurrahman Kifu Taufiqurrahman Kifu was born 1994 in Palu, Central Sulawesi. He studied Communication Sciences at Tadulako University in Palu and is now an artist and graphic designer. Kifu is one of the founders of the forum Sudutpandang Palu. Since 2018 he has been a member of Milisifilem and 69 Performance Club, which is part of Forum Lenteng in Jakarta.