“Urban String”, an experimental series in chamber music that was created by Hamburg-based Ensemble Resonanz in 2011, features a DJ every time: These are not service DJs for lounge music or drunken work parties, but music archaeologists who interpret the ensemble’s program based on their own musical background – and give them a framework.

Changing DJs create seemingly endless chains of association – the scene in Hamburg offers fertile ground in this regard. In almost every bar in St. Pauli, one can find two turntables and a mixer. It is here where the later club DJs grow up and openly experiment until dawn – every night, and in direct communication with their audience. Those qualities especially emerge during the Urban String evenings, because the DJs do not play their “club sets” as they don’t have to animate anyone to dance, except for the synapses of their listeners.

In Hamburg, they mostly come from the surroundings of the Golden Pudel Club: sound poet Nikae, house music “thinking differently” RVDS and the internationally sought after dance expert Phuong Dan are regular guests. Veteran bass explorer Marcus Maack – aka the Vinylizer – and Swing DJ Swingin’ Swanee also add to the evenings’ hybrid range. Another who has often participated is Sebastian Reier alias Booty Carrell. He is the vanguard of the ensemble during their tour in Southeast Asia, immerses himself in the music scene and history of different cultures and tells us here about his new acquaintances:

Everywhere, the ensemble will face a local DJ, a personality of the local scene. I had the opportunity to meet all the DJs during the Urban String Southeast Asian DJ Conference in Studio Lam Bangkok, organized by the Goethe-Institut Bangkok. For two days, we spoke intensively about the concept of Urban String, exchanged knowledge, developed ideas and showed each other our working methods. Allow me to introduce to you… DJ Maft Sai (links) | © Goethe-Institut Bangkok/Luise Keiderling When Maft Sai began to explore the music of rural regions in Isan in the northeast of Thailand a couple of years ago, people in Bangkok derided him: this kind of music, they said, is music for cab drivers. But he heard something else: magical folklore that to him sounded like acoustic techno with unique styles of singing und reminiscent of Ethiopian jazz! Years later, one has to admit: he did convince everyone. His record store Zudrangma in the heart of Bangkok enjoys international reputation, his compilations can be bought everywhere, his Paradise Bangkok International Molam Band travels the world, and Maft Sai has grown into an impresario of the Thai underground. His DJ sets takes listeners on a musical journey and intertwine where normally nobody sees a connection. Quite naturally, he links Thai Molam with Jamaican dubreggae, Sundanese folk with German krautrock or Turkish Anadolu-rock. In that regard, a connection to European classical music seems to be more than obvious! Fatim | © Goethe-Institut Bangkok/Luise Keiderling Syarifahfati Matulzaharah has such an illustrious name that in the age of Google, it would stand in the way of an international career. Therefore, she has shortened her name to Fatim. At 26 years of age, she is the second youngest participant of the conference. Behind her restraint and friendliness, one can find a monstrous bass music DJ. Her sets target legs, brains, the stomach region. Her music builds bridges from the past into a distant future. Fatim is part of the female DJ collective Attagirl that performs between Kuala Lumpur and Singapore. And she is an advocate of subtle humor. 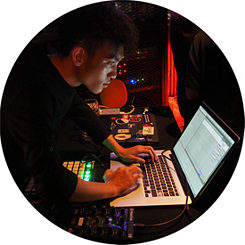 NK' | © Goethe-Institut Bangkok/Luise Keiderling At 18 years of age the youngest participant of the conference by far, but at the same time a rising star in the local scene of Hanoi – who knows where his rather trendy future bass sound will lead him. There is great potential in this exceptional person. The performance with Ensemble Resonanz will be his first musical borderline experience with a completely open result. . 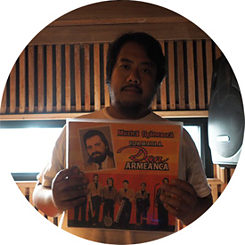 Dea | © Goethe-Institut Bangkok/Luise Keiderling 33-year-old Dea is already a legend among disco obscurantists worldwide. British record king Giles Peterson described his set as “the best he has seen in ten years”. But Dea plays like someone who doesn’t have to prove anything to anyone anymore. In addition, he works as sound designer and producer, and in Bali, where he is currently based, he also works as artistic director for an event organizer. His background as classical musician who was educated at the academy of music will surely motivate him to perform amazing acts during the show in Jakarta.
Dea "SHINE A LIGHT ON" MIX 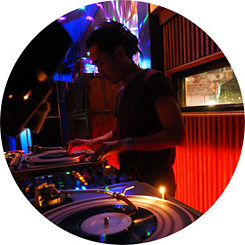 Safuan Joharl of NADA | © Goethe-Institut Bangkok/Luise Keiderling Performance-Duo NADA will meet Ensemble Resonanz in Singapore. Only Safuan Johari, responsible for the music production, could participate in the conference: Safuan Johari presented to us their collaborative work that likes to poke parodic fun at the music industry, but also music that transports things from the past to a fictional present time. The sound of Malaysia’s pop music from the 1960s is the basis of NADA’s hilarious excursions.
INTERVIEW mit NADA Similar Objects | © Goethe-Institut Bangkok/Luise Keiderling When Jorge Juan Wieneke alias Similar Objects introduced his work, it became obvious very quickly that this man is guided by ideas, and he can transport these ideas into music exceptionally well. The result is a series of contemporary electronic genres: trap, ambient, hip hop beats – media art. Every project is a complete cosmos, a phase, a world of feelings. Indeed, his machines sound so human that it is hardly surprising that he breaks the ice with the audience, for instance during the public joint DJ session at Studio Lam, with which we ended the conference.