Interest in the German language in the world differs according to regions and politics. Secretary-general of the Goethe-Institut Johannes Ebert was interviewed by the journal Forschung & Lehre.

Forschung & Lehre: What status does the German language have in Europe and worldwide?

Johannes Ebert: German is the language in Europe with the most native speakers. According to a recent study, around 15.4 million people worldwide are learning German, 11.2 million of them in Europe. So German has a strong position within Europe. While the number of German learners is increasing in some regions such as China or in African countries, we are presently observing ups and downs in Europe. A recent survey, in which the Goethe-Institut is also involved, shows that German is an important part of school education worldwide. The number of schools in which German is taught has grown from 95,000 in 2015 to 106,000 in 2020. In some countries such as France or Russia, the numbers are increasing slightly. But in Poland and Hungary the number of learners in schools is falling somewhat. Basically, we’re seeing that in countries that are increasingly nationally oriented, the appreciation of foreign languages ​​in educational policies is fading somewhat. Foreign languages ​​no longer play the role they play in very open societies. They are often supplanted by mathematics and science subjects and other electives.

F&L: Can the Goethe-Institut take countermeasures?

Johannes Ebert: In countries like Poland or Hungary in particular, which are geographically very close to Germany and where there are close historical and labour market ties, we promote German among schoolchildren and parents and also by stimulating discussions about the position of foreign languages at the educational policy level. Basically, though, we see that with almost two million, Poland still has the largest number of learners of German in the world. So we’re not observing a total collapse, but a slight drop in the numbers and that foreign languages ​​no longer have the same importance in the education system as they did before. The benefits of foreign language learning have also come much more to the fore. In the past, people wanted to learn German in order to be able to read Husserl or Nietzsche in the original, or because they appreciated German classical music. That has decreased; today it’s more about the question of whether and when foreign languages ​​are important for one’s professional future or for one’s studies.

F&L: Do I perceive faint regrets?

Johannes Ebert: Of course, it would be nice if literature or music were the inspiration for learning German. Language offers access to the culture and actually also to a people’s self-image. That’s why I’m a big fan of language learning in general. But I have to accept the realities as they are. And that’s why I think it’s good that people find Germany attractive as an educational and business location; that includes Germany as a cultural location. Those who learn German also have access to the cultural aspects of our country. However, we find that in international cultural exchange, the lingua franca tends to be English.

F&L: It makes a difference whether a language is learned as a first or second foreign language. What trends are emerging for German? 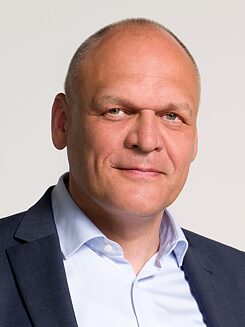 Johannes Ebert | Photo (detail): © Herlinde Koelbl Of course, it’s better when German is learned as the first foreign language, because then one has far better skills at the end of school. But ultimately, we have to acknowledge that English is the number one language in the world. Incidentally, this is also true in countries like Russia, where earlier, before the dissolution of the Soviet Union, German was the first foreign language in many schools. Since the 1990s and 2000s, English has also advanced to become the first foreign language there and German is taught as a second foreign language. Around 1.8 million people in Russia are now learning German as a first or second language.
For us at the Goethe-Institut, it’s a positive thing that German is increasing as a second foreign language. A few years ago, we investigated where foreign students studying in Germany learned German. The result was that around half of them first learned their German in school and most of them then continued to learn German (at Goethe-Instituts, universities or other language schools). So they’d first established contact with Germany and the German language. And if that doesn’t bring them to the suitable skill level due to a low number of classroom hours, as is usual with a second foreign language, they continue learning elsewhere. So it’s an introduction to German, but no longer like the first foreign language where they reach the top level. They can’t simply start studying at a German university with these basic skills. This is a trend that we have to accept. That’s why we joined forces with universities and the DAAD to develop new models to adequately prepare students.

F&L: Isn’t that a major challenge for both sides – the foreign students and German universities?

Johannes Ebert: People who want to study in Germany must be given the opportunity to adequately learn German. In my opinion, this is ensured through the Goethe-Instituts, private providers and German courses at universities. And the majority of students manage it. As for courses in Germany taught in English, we also believe that these students must be offered the opportunity to learn German. That’s the only way that they can make their way in German society and have the opportunity to integrate and make contacts beyond the university. It’s also important that university graduates from abroad aren’t immediately lost to the German labour market.

F&L: At the same time, it’s about attracting foreign skilled workers to the German labour market. Is learning German a big hurdle?

Johannes Ebert: Germany is highly dependent on the immigration of skilled workers. The coronavirus crisis in particular shows that we need qualified people from abroad in the health sector, but also in the IT sector. If we want to maintain our social and economic standards in Germany, that’s a major task for the future. The new immigration law has made access to Germany easier. A survey that we published recently makes quite clear that potential immigrants rate learning the German language as very important. For this reason, initiatives by companies and government programmes should promote learning of German and awareness-raising for German culture and society in the countries of origin and enable continued learning in Germany.

F&L: How important is a multilingual Europe for the future?

Johannes Ebert: Language always creates access to the ideas, the culture and the sense of self of other countries beyond the pure communication instrument. Multilingualism has an immensely enriching effect. In this respect, I think the rule that everyone should learn two European languages in school in addition to their native tongue is very important. When you live in a country for a longer period of time, it’s also a sign of respect that you learn its language. The European Union is not just an economic and political project; it’s also about culture, values and mutual perception. However, policymakers should generally understand multilingualism as an opportunity and a strength. And it’s not just about multilingualism within Europe, but also multilingualism within Germany. Our school system also needs approaches and opportunities to recognise people with other native languages and see them positively. This is quite crucial for a country as internationally embedded as Germany. In my opinion, we in Germany should think more about this.

This is an abridged version of the interview, which first appeared in the journal Forschung & Lehre, issue 11/20. You can read the complete version in German language here.