What do you think of when you hear “Moroccan music”? And how suitable are such classifications? “The Latest at Goethe” spoke about this with Mohcine Ramdan, who can be heard with his ensemble “JISR - Brücke” in “Contrapunkt - Dialog der Kulturen” by BR-KLASSIK and the Goethe-Institut.

What can the audience expect during the “Contrapunkt” event “Schmelztiegel Marokko” (the Melting Pot of Morocco)?

Mohcine Ramdan: The audience can definitely expect a memorable concert influenced by Moroccan music. We’re an international ensemble; I’m from Morocco, my band members come from all over the world. 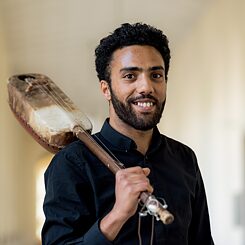 Mohcine Ramdan, Ensemble „JISR – Brücke“ | Photo (detail): © Fiona Schweizer Morocco has different musical cultures that are very distinctive from each other. This is partly due to Morocco’s geographical location and its historical development: influences from Asia, from Africa, from Sub-Saharan Africa and of course from Europe. Arabic music, Berber music from the Atlas, Gnawa music and Andalusian music from the Jewish-Muslim Andalusians who were expelled in the Middle Ages and found a safe haven in North Africa. This gives Morocco a hybrid musical culture that is difficult to depict in one concert. We’ve nevertheless tried to do justice to this diversity in our concert. With our international ensemble, everything sounds a bit different from the clichés imagined as Moroccan music.

Which cliché about Moroccan music annoys you the most?

Mohcine Ramdan: Morocco is categorised as an Arab country, so many people think, “Well, that’s Arab music then.” But that’s not true at all. Morocco has developed in a completely different way, as I’ve already described. The annoying thing is that many people think that the music is always traditional and folkloristic.

You lead the ensemble “JISR – Brücke”. What’s unique about it?

Mohcine Ramdan: The music we usually play at our concerts is unclassifiable. And that’s also the unique feature of this music. The ensemble unites the migration-related musical diversity that’s prevalent in Germany. As musicians, we’re rooted in different musical traditions of the world and we try to transform this into a musical mosaic.

Can you tell us more about the music of the Gnawa?

Mohcine Ramdan: This Moroccan music style is recognised as a cultural heritage by UNESCO. It’s the music of the Black Africans who came to Morocco in various waves as enslaved people and lived in the diaspora. They brought their beliefs and cultural backgrounds with them. This then merged with what was prevalent in Morocco and this hybrid music culture emerged from that. It’s basically similar to the emergence of blues or jazz in America, but with a strong mystical component. The music also serves as a kind of spiritual therapy for the collective trauma of the enslaved of the time.


The interview was conducted by Carla Jamatte, Goethe-Institut e.V.

“Contrapunkt – Dialog der Kulturen” is an event series by BR-KLASSIK and the Goethe-Institut.