Established in 1996 and funded by the German government, the Helen & Kurt Wolff Translator's Prize is awarded each year to honor an outstanding literary translation from German into English published in the USA the previous year. | Photo (detail): © Goethe-Institut e.V.

You will be awarded the Helen and & Kurt Wolff Translator's Prize in 2021 for your translation of Judith Schalansky's “An Inventory of Losses”. How did you come to write this book? 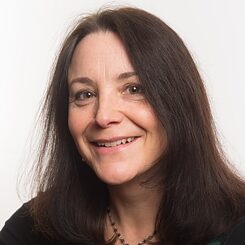 Jackie Smith, winner of the 2021 Helen & Kurt Wolff Translator's Prize. | Photo (detail): © Patrick Bennett Late 2018 the editor and publisher Bill Swainson invited translators to submit sample translations for Judith Schalansky's “An Inventory of Losses”. Happily, my sample was chosen and I was commissioned to translate the book. I‘d not heard of Judith Schalansky before, but I soon discovered that she was an extraordinarily talented and inventive writer, and it was clear that translating her book, though demanding, would be hugely enjoyable and rewarding. The book was unlike anything I’d seen before. It consists of twelve stories or essays, and each one weaves a narrative around some item that has been lost to the world: the extinct Caspian tiger, an island that has sunk into the sea, a demolished landmark of the GDR, the lost love poems of Sappho... It‘s a book that defies classification and includes elements of memoir, fiction, academic and historical explorations, nature writing, philosophical meditations. It constantly surprises the reader. It almost felt like translating twelve separate books.

The book as a beautiful object


Jackie Smith: I wasn’t only impressed by the quality of the writing. I loved the fact that the book is also a beautiful object in itself. Besides being an author, Judith Schalansky is also a book designer, and places great importance on form as well as content. The twelve pieces are each exactly sixteen pages long and are each separated by a charcoal-grey page bearing a sombre, shadowy image of the lost thing that has inspired that particular story.

“An Inventory of Losses” is your first literary translation. What were the particular challenges for you?

Jackie Smith: The first challenge, I would say, was reproducing Judith Schalansky’s wonderfully dense, precise, complex prose in English. Sentences were often so jam-packed that it was hard to fit everything in, yet I didn’t want to simplify the text or split up long sentences as this would change the flow and give the English reader a very different reading experience.

The right narrative voice for every story


Jackie Smith: Each story has its own distinctive style and tone, and it was important to capture these in the English too. Finding the right narrative voice for each piece was also challenging. One story consists of an imagined interior monologue by a sulky Greta Garbo as she strolls the streets of Manhattan lamenting her lost youth. Some of the more essayistic pieces called for a more academic narrative style.

Another particular feature of the book is the phenomenal amount of meticulous research that went into the writing of it. As the translator, I also found myself having to research all sorts of things, in order to better understand the context and get the vocabulary just right: from the names of the gates of Ancient Rome, to wetland flower species, to the etching techniques of Piranesi. All very time-consuming, but I also learned so much in the process!

How did you get into translation work?

Jackie Smith: Both my parents were French teachers, so we visited France a lot when I was young and I think that helped install in me the idea that learning a foreign language can open up a whole exciting new world. I’ve always enjoyed playing around with language, and after my modern languages degree I decided to embark on a career as a translator. My first job involved translating workshop manuals for cars! I then spent several years as a translator at a German bank before finally taking the plunge into literary translation.


The questions were asked by Alexander Behrmann and Carla Jamatte.

The Helen & Kurt Wolff Translator's Prize 2021 goes to Jackie Smith for her translation of Judith Schalansky's "An Inventory of Losses" ("Verzeichnis einiger Verluste"). The prize, which is funded by the German Federal Government and endowed with 10,000 US dollars and celebrates its 25th anniversary this year, annually honours an outstanding literary translation work from German into English. The award ceremony will take place on 24 June 2021 at the Goethe-Institut in New York in the presence of Alexander Wolff, grandson of Kurt Wolff.