For their House Calls, guests end up in quite dissimilar European everyday realities. | Photo: Caroline Lessire

With its House Call project, the Goethe-Institut plants ten authors in the everyday lives of European city dwellers. The hosts reveal a bit of their lives’ realities and their guests write about them. The result is a literary, connective, miniature Europe that will now be issued as a six-language e-book.

For a span of seven months, ten well-known authors from Portugal, Spain, France, Luxembourg, Belgium, Italy and Germany visited 17 European cities. While they were there, local people – such as tattoo artists in Porto, football fans in Freiburg and a dealer in devotional objects in Palermo – opened their doors and granted them insights into their lives. The authors captured their personal impressions in writing.

Every week, a new story will appear here to download in six languages.

It launches with Marie Darrieussecq’s story about her House Calls in Naples and Dresden. In it, the French writer notes, “Europe is both the rosy blue of the Bay of Naples and the very green green of the banks of the Elbe, the sweet and the saltwater, hills and volcano, birch and olive trees, very different wines.”
In a conversation with her hosts, a Neapolitan family, she asks, “’What are your city’s biggest problems nowadays?’ They laughed, ‘You mean, besides the Camorra?’ They explained to me that the administration, the police, the traffic, everything in Naples can be abruptly brought to a halt or released again, for money or aggravation.” 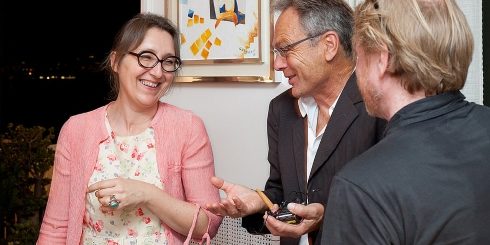 For her House Calls, the French writer Marie Darrieussecq visited Naples and Dresden. | Photo: Martin Devrient Her journey then took her to Dresden, a city without a mafia, yet, “one asks what Dresden is frightened of, for the city is frightened. It was here that the Pegida Movement arose two years ago and the city is divided in half: some say yes to the refugees; the others say get out. Some want Europe; the others hate it. In this sense, Dresden is typically European.”

In Dresden, Marie Darrieussecq was the guest of the city guide Grit Werner. The two speak about the city’s past and its appraisal.

Dresden, a city “that lives in the self-awareness of innocence. Over a glass of wine from the region, Grit and I ponder how the bombing of the city and the fear of immigrants are linked together.” The two would have liked to spend days discussing this mixed Europe.

Accompany Marie Darrieussecq on her House Call in the following video.