The Border
Between here and there, me and you

Visitors at the vernissage in Moskow. | Photo: Alexey Kubasow

Borders are part of everyone’s lives – what do they signify? Who defines borders? When do they confine us and when are they important? With its travelling exhibition The Border, the Goethe-Institut is seeking answers to these questions by means of artistic considerations. Here, participating artists offer insights into their reflections and works.

The project by the Goethe-Institutes in Russia contemplates borders and boundaries of many types. “Border” can be understood as a metaphor, as a character that is not static, but the object of discourse and change; a highly topical issue for Russia and the former Soviet Republics as well as for Germany and Europe. Both the geographical and the cultural border between Europe and Asia serve as a common thread.

The exhibition focuses on a younger generation of artists who are presenting their reflections and insights on the subject for the first time together in a traveling exhibition in Eastern Europe, Russia, Central Asia and Germany.
The exhibition will be accompanied by local symposia with speakers on site and German experts. The project is curated by Inke Arns, director of the HMKV in Dortmund, and Thibaut de Ruyter, Berlin curator and art critic.

Some artists discussed the subject "border" through films. | Photo: Alexey Kubasow Tasja (Anastasiia) Zhyvkova:
“Borders differ. Some borders, like frost on the grass, are sharp and compact; others like those marking days are gradual and spacious. In my work, I approach synthetic borders. Through photos and texts, I recreate cognizable borders in natural environments. My hope for the future is that borders will evolve into bridges.”

Saule Dyussenbina:
“Sometimes it seems to me that borders are conventional and abstract, that they are only in people’s mind, but sometimes the borders are like oceans that separate us and we can’t swim to the other shore. Both geographic borders and mental ones are unstable and constantly change their outlines.
I try to do my work without losing touch with the location where I was born and where I live, and at the same time I want to guarantee that they are understandable to everyone in the world. It’s also a junction where a viewer and an artist tear down any borders in the moment of understanding.” 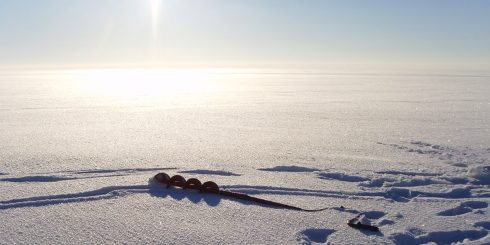 The artist Eleonore de Montesquiou works at the border between Estonia and Russia. | Photo: Eleonore de Montesquiou. Alla and Aleksey Rumyantseva:
“For humans the only real borders are their bodies. So all the other borders, both in space and in the process with respect to humans are controversial.
We live in an era where progress in technology can remove social and political boundaries. On the one hand, with the abolition of the boundaries we seek freedom, but on the other hand, most people are manipulated by those who actually own these technologies.” 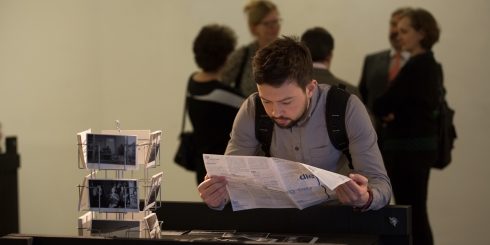 A magazine is also part of the travelling exhibition. | Photo: Alexey Kubasow Marat Raimkulov:
“A border is a relative concept. It is a territory of political and existential tension, a place where life flows either accelerate or stop altogether. When crossing the boundary, we seem to leave one ‘I‘ and move into another ‘I.‘ A border is a place of increased control; there are many invisible exchange flows.
In my work I would like to appeal to the existential aspect of the boundary as a concept. This part seems interesting to me.
It seems to me that reshaping boundaries painfully affects people’s relationships. It is a certain challenge and we need to be able to save ourselves and our loved ones in spite of these borders, to sustain the invisible networks of friendship, communication and exchange through the boundaries. The lesson taught by history is that those who are trying to break down communications soon lose their power.”

Eleonore de Montesquiou:
“Borders are limits that one struggles to overcome. I hope that border checkpoints disappear, although I fear that they are used against those one wants to reject.”

“The Border” is an exhibition project by the Goethe-Institut that will travel to Moscow, St. Petersburg, Krasnoyarsk, Kiev, Tbilisi, Minsk, Dortmund and Central Asia and is curated by Inke Arns and Thibaut de Ruyter. With kind support from the German Foreign Office.