The Kurdish culture and language have long been at the centre of political conflicts. The Goethe-Institut is presenting the works of two Kurdish playwrights to continue its Welt/Bühne series.

At the Marstall of the Residenztheater in Munich, one of the essential problems of human coexistence was discussed: when everyday communication becomes difficult just because of language. Two dramatic readings for Welt/Bühne II presented contemporary drama in the Kurdish language. This is of linguistic importance because Kurdish can only be spoken in Turkey under discriminatory conditions, especially under the current political circumstances. 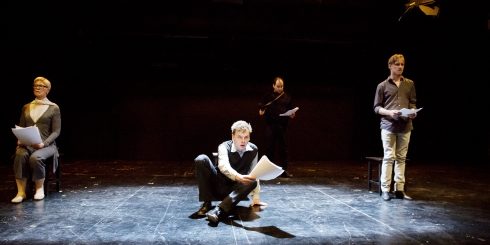 The bus is not coming: Three people and doll grapple with communication issues at a bus stop. Actors from left to right: Norman Hacker, Paul Wolff-Plotegg, Christian Erdt. | Photo: Konrad Fensterer In autumn of 2016, the entire city administration of eastern Anatolian Diyarbakır was arrested and almost all of the contracts of the members of its renowned Kurdish-speaking theatre were terminated. Emin Yalçınkaya, one of the two playwrights for Welt/Bühne II, was one of them. Since then, he has continued his theatrical work in a new ensemble.

His play Of Fire and Water, arranged by Britta Ender, is about the encounter between a Turkish soldier and a Kurdish family who are trapped together in a cellar during a street battle. At first hostile to each other, over the course of a long day and they get closer, at least a bit. 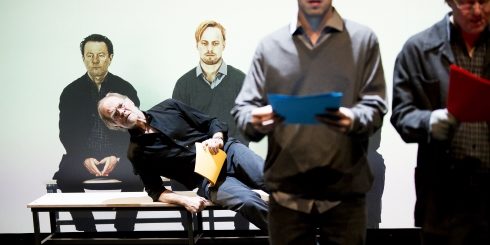 Plays that set their mark: The situation of the Kurds in Turkey is dominated by language policies and cultural restrictions. Actors from left to right: Norman Hacker, Paul Wolff-Plotegg, Christian Erdt. | Photo: Konrad Fensterer The second playwright of the evening, Mirza Metin, is active in Istanbul advocating the survival of the Kurdish language, in particular through his interpretations of the Kurdish narrative traditions of Dengbêj and Cîrokbêj. He writes plays in Turkish and Kurdish and has received numerous awards with his ensemble Şermola Performans.

In Interlude, arranged by Franziska Angerer, he tells the story of three people who speak different languages and can only talk to each other with the help of a medium: a doll that can speak the three languages Kurdish, Turkish and German.

It was an evening that united the playwright and the plot, and, in a way, not only presented other – linguistic – worlds, but also attempted to make communication in Kurdish approachable.