Inseparable, Christoph Biemann and “the Mouse.” Amazing and making kids think is very important to him. | Photo: Artyom Golochapov

Why is the sky blue? Why do seashells hum? How does a television work? For years, the Sendung mit der Maus, called Mouse TV in English, has been answering these questions and more recently so has the Children’s Online University developed by the Goethe-Institut Moscow. We spoke with Christoph Biemann.

Mr Biemann, you travelled to Moscow last November for the Goethe-Institut. Was it your first journey to Russia? Do you speak Russian?


Yes, it was my first journey to Russia. It was very interesting for me – almost overwhelming. I gained a lot of new impressions and insights about what Moscow is and what Russia is.
No, I don’t speak Russian although my grandfather taught Russian and worked in Russia for many years. I speak it when I’m dubbed, though. I heard myself speaking Russian. That was a very strange feeling.

You also took part in the launch of the Children’s Online University in Moscow. How much were and are you involved in the project?

I’m involved with the establishing shots for the Children’s University where I present the segments that originated from the Sendung mit der Maus. I package them as introductions based on the topics. We didn’t shoot any new sequences for the Children’s Online University because we already have 1,000 documentaries “on tap.” We will, however, tape new presentations and upload them to the web platform in April.
At the launch in Moscow, I talked about the educational value of laughter that was very well received. It was impressive to speak in front of over 1,000 participants. 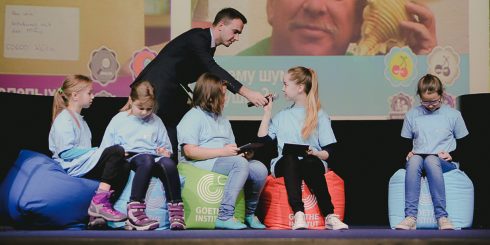 A conversation with young students of the Children’s University. | Photo: Artyom Golochapov And what do you think is the educational value of laughter?

Laughter opens the brain. You can say it in a nutshell: laugh and you learn faster and better. Information and teaching material is more easily absorbed with humour or other positive emotions. That’s the principle behind the Sendung mit der Maus, which will certainly also be very successful among learners in Russia.

Mr Biemann, what does the project mean to you personally? Why did you say yes so readily?

The project is very important to me. The opportunities for German as an important foreign language should be used. This is a good and meaningful thing to which the Mouse stories can contribute a lot. If people then say, “I learned German with the Sendung mit der Maus,” that makes me very proud and happy. I believe in the work with and at the Children’s Online University because it is meaningful and important.

Were the Russian children already familiar with the Mouse?

You studied at university yourself. If you could take up new studies today, what would you major in?

I studied at the Academy of Television and Film in Munich.
But when I was a teenager, for a long time I wanted to study biology, more specifically botany. I still enjoy making stories for the Mouse about these subjects. Right now, for example, about dandelions. It’s a wonderful story of how the yellow blossom transforms into a seed head in just two days. It’s really amazing and makes you think and that is the core of my work and my soul. I’m fascinated by such things; I find them exciting.