In 2017, Russia is celebrating the centennial of the Russian Revolution. The Goethe-Institut St Petersburg has dedicated a major cultural project (an exhibition and performance programme) to the occasion in collaboration with two German curators. Yasha Young is the director of the Urban Nation Museum in Berlin and co-curator of an exhibition at the St Petersburg Street Art Museum. The dramaturge, curator and author Florian Malzacher is artistic director of the Impulse theatre festival in Cologne, Düsseldorf and Mülheim an der Ruhr. He is working on his cultural programme at another St Petersburg art institution: the Access Point Summer Festival of the Arts. Here, the two report on their work.

How did your involvement in the project come about? 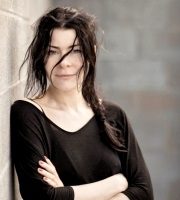 Yasha Young | Photo: Tomas Flint Yasha Young: The Urban Nation Museum in Berlin that I run was interesting for the Goethe-Institut St Petersburg because it shows the form of art that was sought-after at the moment in Russia. I was able to mobilize a number of artists who I have collaborated with for a long while.

Florian Malzacher: The topic of the Russian Revolution is challenging and important. It gives us the chance to think about how we should consider utopias and political movements in the past as well as the future. It is always impressive to see how contemporary many artistic, philosophical and political ideas seem and how far we still are from their realization. That was the starting point for our project.

Florian Malzacher | Photo: Robin Junicke I then spoke to many different theatre people, writers and artists – mainly from postdramatic theatre – to create new works or actions that would take place in different parts of the city. These places are both artistically and historically connected with the legacy of the Revolution. Special attention will be paid to the female protagonists. The Romanian choreographer Alexandra Pirici, for example, is creating an action at the Russian State Museum framed with works by the Russian avant-garde painter Natalia Goncharova.

How do you interpret the idea of the Revolution within the context of your project?

Malzacher: We are not concentrating on actual events from this era although they will play a role. However, the works also deal very much with artistic freedoms and focus on what the concept of utopia means for us today. There is no homogeneous outlook; take the poet Anna Akhmatova who contradicts the avant-garde of her time in many ways.

Who is your audience?

Young: My personal experience shows that people who are interested in art in general like to follow new movements, new techniques and new topics. For Russia, I am hoping for a good blend of cultural institutions, galleries, students or political activists.

Malzacher: The audience will largely be the one that is interested in the Access Point Festival. In only a few years, the organizers have fantastically succeeded in making non-mainstream theatrical works accessible to a wide audience. I am sure that the audience is open to discovering theatre forms it does not yet know.

The interview was conducted by Ksenia Reutova.