“We’re off and away!” – seven teens from Berlin on stage | © Foto: Konstantin Reinhart

One subject – one stage – five interpretations. At this year’s PASCH theatre festival in Berlin, teens from all over Europe met with plays in German they’d written themselves in tow.

What does home mean? Why do people head off and away? How does flight feel physically? How much courage is needed to stand up against expectations and social conventions and live your own life? And, if you do, is the “new” life really better than the old?
Invited by the Goethe-Instituts of Southwestern Europe, the participants in the Third European PASCH School Theatre Festival devoted themselves to the motto “A New Life.” In May 2017, fifty teenagers from the PASCH schools in France, Portugal, Spain, Italy and Germany met in Berlin to present their plays at the PUMPE youth cultural centre.

SCENES OF HORROR AND SOLIDARITY 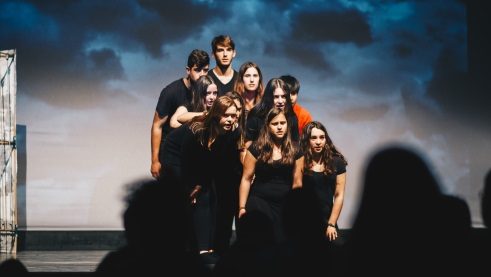 “Pathways” – a play by 10 teens from the IES Garcilaso de la Vega school in Spain | Photo: Lennart Kortmann Waves, a dark sky, shots ring out. A wall, metre-high fences, fear. A young man escapes across the sea. Once he arrives in Berlin, he ends up on the streets, earning his living as a street artist. In Pathways, the pupils from Spain tell his story. 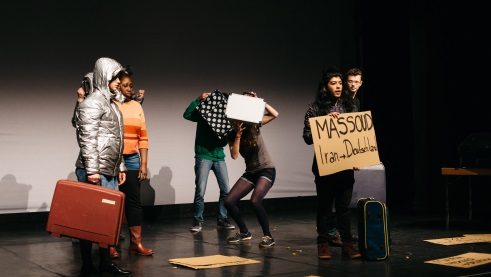 Seven Berliners perform “We’re Off and Away!” | Photo: Lennart Kortmann The group of teens from Berlin first interviewed people who had experienced displacement; who had headed off at different times and for different reasons. On stage, they bring their personal destinies to life in the form of a potpourri of quotes in their play We’re Off and Away! 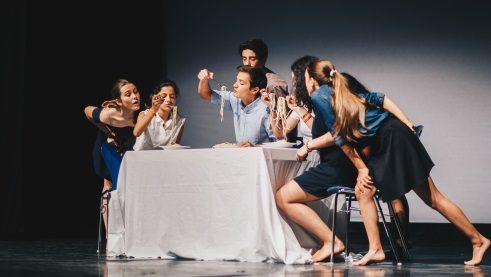 “The Others and I” performed by nine eighth graders from the D. Fernando II School in Portugal. | Photo: Lennart Kortmann The group from Portugal used humour to deal with the festival motto. The Others and I tells the story of a boy who musters all his courage against the resistance of family and friends to begin his new life as a “papalaka.”

A DIALOGUE OF EQUALS

A discussion between the audience and the founders of the Jugendliche ohne Grenzen (Teens Without Borders) initiative, Çingiz Sülejmanov and Mohammed Jouni, revealed how the scenes played on the stage can be reflected in real life. They fled to Germany from Azerbaijan and Lebanon and formed a group of young refugees to advocate for more generous residence rights, implementation of the UN Convention on the Rights of the Child and the rights of their deported friends to return.
“Even after years in Berlin, people still eye me suspiciously on the U-Bahn,” Jouni relates. The constant monotone questions about his origins get on his nerves. A dialogue of equals is what the two are seeking. “Material aid when you arrive here is important, but the acceptance and appreciation of my otherness is essential for successful integration and a good new life. Don’t talk about us, talk with us!”

LIVING A NEW LIFE IN BERLIN!

How does it feel to be stared at or to have to survive in a strange city without money? The young Europeans found out in three-day theatre workshops that formed the fringe programme of the festival. The working group “Conquer Berlin” tested city dwellers and the city for their suitability for integration and thus learned more about the survival strategies of refugees in Berlin.
The aims of the “Open Your Eyes” workshop were to embody the feeling of being a foreigner and thus engage people in conversation through artistic interventions. The group members shared their feelings about the refugee issue in choreographies and presented them in the public space.
Together, the fifty teens from five countries dealt with the issues of home, flight and arriving. On and off the stage they were able to feel what it is like to start “A New Life.” One participant in the PASCH School Theatre Festival summed it up by saying, “Tolerance arises through dialogue and exchange, not through a monologue from above.” 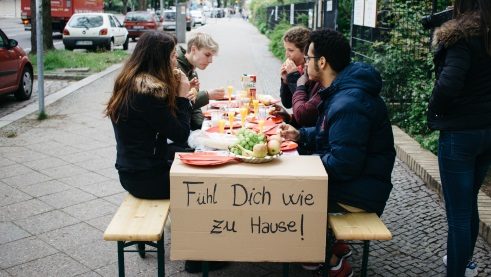