The Goethe-Institut and the German Embassy in Canada, along with many Canadian and German partners, are celebrating the 150th anniversary of the confederation of the country with a series of cultural events underscoring German-Canadian friendship. The exhibition Canada and Germany: Partners from Immigration to Innovation / Le Canada et l’Allemagne: Partenaires de l’immigration à l’innovation shows the history of the close ties between the two countries.

You are coordinating the exhibition Canada and Germany: Partners from Immigration to Innovation / Le Canada et l’Allemagne: Partenaires de l’immigration à l’innovation in Ottawa. What is the exhibition all about? 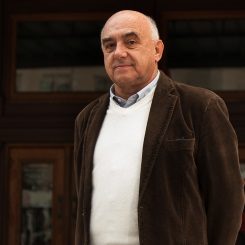 Photo: private Peter Finger: Canada and Germany have a long shared history, a history that has mainly positive aspects, but whose low points in the early decades of the twentieth century have also influenced our mutual relationship. It is estimated that some ten percent of today’s Canadians have some German roots. Therefore, the immigration of German-speaking people and their achievements for Canada’s composition are of great importance. We want to take this into account. However, a balanced picture emerges only if we show our visitors how things between the two countries look now; how the relations are from political, cultural, economic and scientific aspects.

Our approach is broad and, to a certain extent, historical. We didn’t want it to be a history class or a history book on the wall; neither do we make any academic claims. We are telling German-Canadian stories that illustrate the relations between the two countries or territories over the centuries. The leap into the present is achieved by presenting examples from the latest scientific and technical cooperation between the two countries.

How can you portray 150 years of German-Canadian friendship by non-verbal means? Where do the exhibits originate? Are there any particularly fascinating objects?

In addition to the texts and photos, there are several objects used to illustrate the exhibition. These exhibits come from both museums and private collections. From Germany, we received the uniform of a Braunschweiger Jäger who fought on the side of the British during the American War for Independence. Why is this interesting? A large number of these soldiers, who were hired out by their territorial lords to the English crown, began a new life after the war, especially on the territory of modern Québec. We offer video and audio clips, for example, a story of former Canadian Prime Minister and Foreign Minister Joe Clark about his days spent with Hans-Dietrich Genscher in Ottawa, Canada, in February 1990, or examples of lively church music traditions of the Inuit in Labrador. For technology fans there’s a lunar rover that a German-Canadian company is developing as a Canadian contribution to the moon landing planned by NASA in the next decade in the Innovations section.

What motivated you to create such an as exhibition especially for Canada’s jubilee year?

150 years of confederation are an important anniversary here in Canada. The nation is celebrating itself, is proud of its freedoms and its well-functioning democratic institutions. This important event is also being acknowledged by many foreign representatives in the country. So it was clear that the Federal Republic of Germany would participate, too. This was the origin of the German Weeks organised by the Goethe-Institut and the German Embassy in Ottawa, and within this format the exhibition, which will be shown in Ottawa and later in other Canadian cities. Why an exhibition? It gives us the unique opportunity to take advantage of the celebrative feeling and to portray the relations between our two countries to a broader audience as they are: stable, lasting, carried by equal values and by trust.

With the exception of Justin Trudeau, interest among the German public and media in the world’s second-largest nation is rather low. What can be done about that?

Probably not much. The media interest in Germany depends on whether the public perceives issues as exciting. And in that respect, interest in Canada is overshadowed by its southern neighbour. This is basically a positive statement, though. Canada is a peaceful country where people of different cultural backgrounds and origins develop a common Canadian identity, not in the sense of a melting pot, but in the sense of a functioning multicultural society.

Canada is well governed, and by this, I don’t refer solely to the current political constellation. The population lives essentially positive western values. I like to jokingly call Canada an “ideology-free zone.” Radical thought has no place here. All this has the effect that interest is focused on “traditional” topics, such as emigrant stories and nature, and, of course, at the moment on the person of the Prime Minister.