Iran Horizons
"The walls of those days no longer exist!"

How do young, qualified professionals from Iran experience working life in Germany? As part of the initiative Iran Horizons: Opportunities for the Future, eight young people made contacts with a foreign culture when they spent two months as interns in German companies. All of the participants in the joint initiative met at the German Foreign Office for the ceremonial awarding of their certificates.

It was a surprising kind of encounter. When the young architect Nora Noori, 28, tall, slender and with long reddish-blond hair, arrived at the train station in Guben, Brandenburg, she was expecting to be picked up by a male representative of the construction company where her internship was based. In fact, a female supervisor was waiting for her on the platform, also with false expectations: she imagined the Iranian intern would be petite, black-haired and wearing a headscarf. They only found each other after the platform had emptied and had to laugh at their mutual mislead projections. 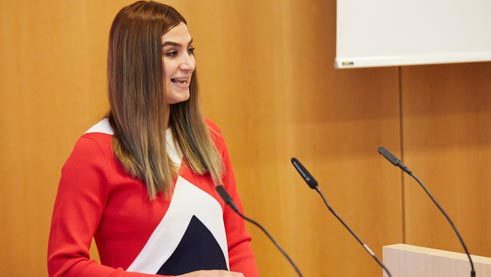 A reality check of cultural clichés is one of the goals of the programme Iran Horizons: Opportunities for the Future. Various partners are involved in the initiative, which promotes both intercultural exchange and economic relations between the two countries: the Federal Foreign Office, the Goethe-Institut, the German Chamber of Industry and Commerce (DIHK) and the Federation of German Industries (BDI) with the support of the German-Iranian Chamber of Industry and Commerce.

At the final event where it was announced that the programme would continue in the future, the positive effect that the 2015 Vienna Convention on Atomic Energy between Iran and the five UN veto powers as well as Germany also had on common trade relations was also highlighted. Among other speakers, Benjamin Godel of the BDI spoke sincerely to the guests from Iran. 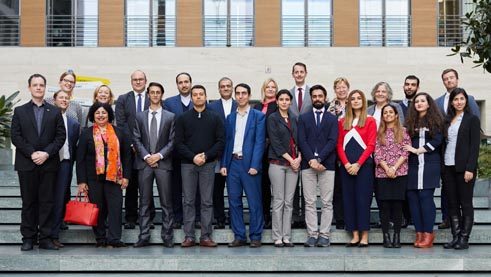 The group and representatives of project partners | Photo: Bernhard Ludewig Noting how important it is for international business to be able to rely on institutions, he advised them, “You can contact us project promoters and the embassy at any time. Whenever you encounter resistance, remember that there is a network in Germany that you can fall back on. Take this opportunity and stay in touch with each other and with us!”

The reports on the experiences of the eight professionals, most of whom were electrical, industrial and mechanical engineers, reflected the considerable language skills they gained in a short time, but also illustrated that the guests from Iran were impressed not only by the transfer of knowledge on a professional level but also by the country and the people. Not just the punctuality of busses and trains, they were also pleasantly surprised by the relaxed atmosphere in the companies, after having received many warnings in Iran that German co-workers barely speak to one another in the workplace.

With respect and amazement alike, typical German correctness was noted with which timetables and safety regulations are drawn up and obeyed. One intern thought that the silhouette stickers of birds of prey seen on several company buildings were a typical German building decoration and the fact that even a city as small as Brunswick has a state orchestra met with great admiration.

At the same time it became clear that there are also still many misconceptions in Germany about Iran. One of the interns was asked if her homeland was still at war and whether it was possible to study there now. This prompted the mechanical engineer Mostafa Aghabeigi (29) to explain in his brief presentation, “I am not an exception in my country! The young generation in Iran is skilled enough to be a worthy partner of Germany and Europe.” 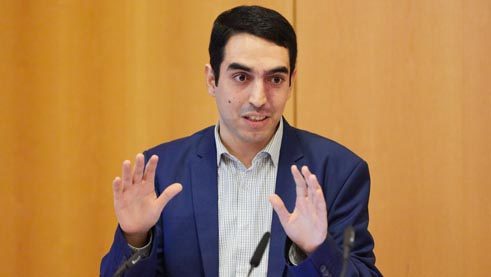 Mostafa Aghabeigi | Photo: Bernhard Ludewig It was noted that 70 percent of Iranians are under the age of 30 and are well-trained professionals. Quoting Frank-Walter Steinmeier, who had spoken of the “danger of invisible walls” in the period after the fall of the wall, Aghabeigi said that he, too, had felt something similar in relation to Europe. It led him to study German language and history.

“But to shorten the distance, I needed more than books and films. And my internship offered me the opportunity to get to know people in Germany directly, without distortion by Western and Iranian media. Today I can say with 100% certainty: The walls of those days no longer exist!” Aghabeigi closed his talk by saying that every intern of this programme resembled a seed that could become a large tree “that will produce sweet fruit for both sides!”