What Martin Luther to Mark Zuckerberg? Actresses and friends of the Studio Hrdinů read manifestos at the foyer of the theater for twelve hours. | Photo: Goethe-Institut, Stepan Pech

Three stages, three radio stations, twelve hours of programming. The theory festival #LutherLenin by the Goethe-Institut in the Czech Republic transformed three rooms in the Prague theatre Studio Hrdinů into radio stations. The question that was the focus: Are we still living in the age of revolutions?

We begin with one of the central questions asked on the posters advertising #LutherLenin: Are we still living in the age of revolutions? For today, when social merit is based on uniqueness, originality and assertiveness – and not on empathy, understanding and solidarity – major change seems almost unimaginable. But perhaps we needn’t be so pessimistic... 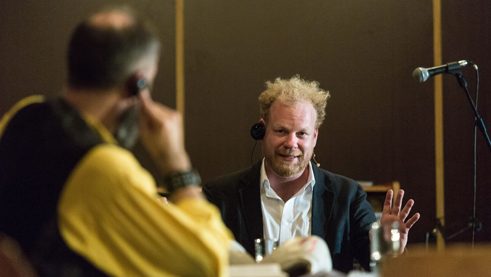 Discourse over the airwaves

The #LutherLenin theory festival is based on the idea that revolutions are always also the result of media upheavals: the printing press with its impact on the Reformation, television, which accompanied the changes in the 1980s, or the Internet, which had a huge influence on the Arab Spring. There’s something in the air. It is invisible, yet necessary for spreading any message. Hence, the media is one basic principle of the production at Studio Hrdinů in Prague, for the entire twelve-hour programme made up of discourse, performance and sound experiments was broadcast over the airwaves. In this way, anyone who had set the right frequency could take part. 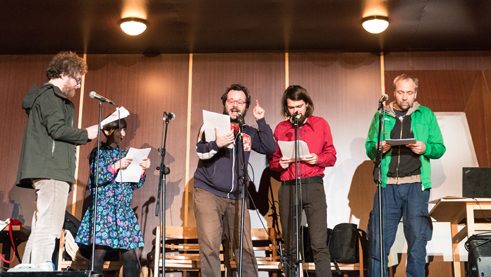 On the same wavelength

These airwaves carrying the radio waves are a beautiful metaphor for how an assembly of individuals can become an event. Whether we call it revolution or not depends on how it is conveyed, told and remembered. #LutherLenin focused on words like revolution, faith, subject, performance and medium. But such words do not exist per se. What matters is how they are used, their interconnections, as the hashtag in the title suggests. This was particularly evident during the event where interpersonal encounters and discussions about historical and current references occurred. For only when people talk and listen to one another does revolution remain in the realm of possibility.