The Mina Festival in Beirut addressed prejudices against Syrian artists in Lebanon and in Germany.  It showed that the freedom of art is as important as the recognition of artists.

Beirut is the city of five-wide queues of cars on three-lane streets, a city where ruins with bullet holes stand right next to towering office buildings, a coastal city without access to the sea – everything privatised or obstructed by buildings. It is the city that sets up artificial Christmas trees in front of the mosques during Advent. And it is a city of women – at least in the arts. Women run institutions like the Beirut Art Center, the Ashkal Alwan Art Museum or the Dar El Nimer cultural centre. Women are the main speakers at discussions and sit on panels in equal numbers as men and, of course, make art. This may be due to the fact that in a country without a state art museum, without state-funded theatre and with a minimal cultural budget, the arts are not so highly valued in society. In fact, Lebanese cultural life is supported by the artists themselves as well as private local organisations in collaboration with international institutions. All money must be especially procured. 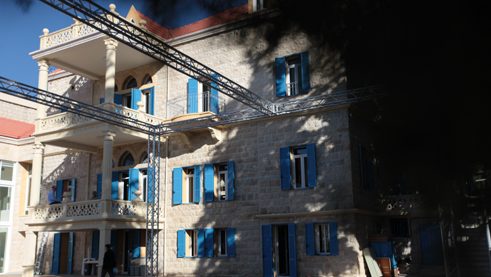 Help from all sides

The Mina Festival of Syrian Art and Culture (Mina means harbour), which took place on the first weekend of December in Beirut, would also not have been possible without British, US, Norwegian, French, Swiss and German support. In addition to the co-organising Goethe-Institut, the Heinrich Böll Foundation and the Rosa Luxemburg Foundation were involved in enabling around 30 Syrian artists who are now scattered in ten different countries to present the results of their artistic work and discuss their working conditions. The Ettijahat (Direction) initiative, which was founded in Damascus in 2012 and has now been operating from Beirut for two years, is the partner of the Goethe-Institut, which has supported Syrian artists with its Laboratory of Arts programme since 2014. 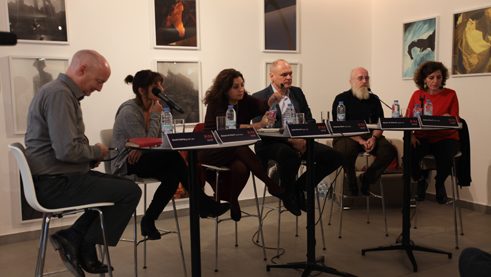 Discussion "An Arab World without Artists" at the Mina-Festival. | Photo: Alia Haju

Only welcome as rubbish collectors

Lebanon is the first port of call for Syrians who are forced to leave their country. About 1.5 million are already here and, along with about 500,000 Palestinians, account for one third of the Lebanese population. At a network meeting on the sidelines of the festival in the Dar El-Nimer cultural centre, complaints were heard that the Lebanese government cannot be made to comprehend that some of these people could also be artists. Syrians can only get a permit to work as rubbish collectors or construction workers. Painters or actors are not welcome, said Christine Thome, the director of Ashkal Alwan. And the filmmaker Saeed Al Batal even spoke of a “fascism” of the Lebanese government against Syrians.

The role played in this by the decades-long deployment of Syrian troops in Lebanon was not discussed in this circle. The attorney Nayla Ja’ja’ added that there is indeed an “artist visa,” but it was only used to bring prostitutes into the country. “A category of art beyond entertainment needs to be legally recognised,” she said. Meanwhile, another filmmaker came to the defense of the Lebanese government, saying, “Unlike the Germans, they at least let us enter the country.”

In the end, those present agreed on a proper agenda: They want to establish an emergency intervention network, to publicise examples of systematic racism, to ask international donors to put pressure on the government to grant artists work permits, and to refuse to allow themselves to be divided into “Syrian artists” and “Lebanese artists,” but insist on being considered “just artists.” 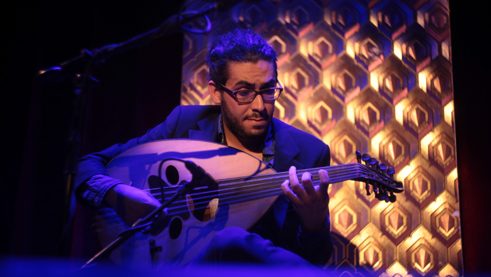 On the following day the stigmatisation of Syrian artists was also an important topic in a public discussion in the newly opened Goethe-Institut building – smartly designed in Goethe green – in the Gemmayzeh district. Stage designer Bissane Al-Charif, graphic artist Mouneer Al-Sharani, Laila Hourai from the Ford Foundation, David Codling from the British Council and Goethe-Institut CEO and Islamic scholar Johannes Ebert sat on the panel moderated by Helena Nassif, the new director of the Al Mawred Al Thaqafy network. “We are promoted in Europe only if we are labelled as Syrian refugees,” Bissane Al-Charif, who lives with a French passport in Paris, complained somewhat bitterly. It was a complaint that has also been heard in Berlin, for example in Mohammad Al-Attar’s play Iphigenia, which was performed at the Volksbühne in October.

To process fleeing with creativity

At the same time, all of the artistic works shown in Beirut, without exception, actually dealt with the topic of flight, being refugees or the war in Syria. For example, Hiba Alansari, who lives in Munich and Berlin, arranged an installation and performance about a mathematics book (Math Book) found in the rubble of a northern Syrian city. Filmmaker Orwa Al Mokdad documented the collapse of the civic militia resistance on the North Syrian front (300 Miles). The writer Rasha Omran read an article about why she does not feel able to leave her Cairo exile. And so on. 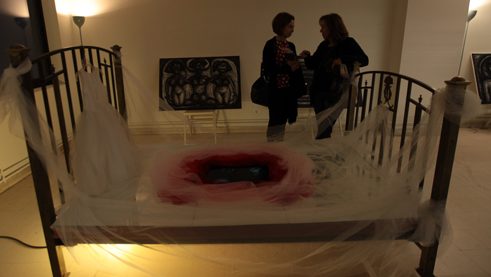 Refugees don’t come out of nowhere

Laila Hourai spoke candidly at the Goethe-Institut about the perception of Syrian artists in Europe, noting, “Refugees there are looked at as if they came from out of nowhere. But they have a background, even if you are not familiar with them in these countries. There are theatre and fine arts in Syria. They have an artistic and cultural history.” What can be done? The best way to help is to support the artists where they are still somewhat at home: in Lebanon, for example. At the Goethe-Institut, a visitor spoke up and said, “There are a few artists still in Syria, there are the many abroad and in between: in Beirut. And I certainly do not want to leave here. If I could not come back to Lebanon, I would lose my homeland a second time.”

In practice, however, Western institutions are set narrow limits in promoting art and culture abroad. “There is plenty of money for humanitarian aid,” Laila Hourai said. “But art and culture are just as important. You’d hardly believe it, but in the refugee camps they are creating their own artistic language. You should invest in them!”

From the very beginning, for example, with the Goethe-Institut Ideas Boxes, which have been employed for a year now, albeit only in small numbers, in Turkey, Iraq, Jordan and Lebanon. They are multifunctional boxes filled with books, games, painting utensils, but also tablets and computers, to provide children and young people among the refugees with creative programmes and teach them media skills. In Choueifat, a town southeast of Beirut where numerous Syrian refugee families live, some of the boxes were deposited in a day care centre for Syrian children by the Italian aid organisation Intersos, where they are accompanied by the mediation work of artists like Stine Jacobsen from Berlin. 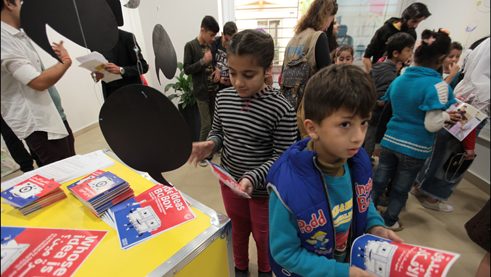 Children who participatinge in the exhibition "Whose Idea is it?" in context of the project "Ideas Boxes" | Photo: Alia Haju She invented a game, for example, in which five to eight-year-olds push one another around like living cameras and decide when the other person may open their eyes and see something. This was linked to discussions about who has the right to an image of a person and encouragement to feel free to refuse them the right.

On Saturday afternoon, the Goethe-Institut opened an exhibition of photographs, objects and stop-motion films made by the children from Choueifat. The young artists were visibly proud, one boy with a papier-mâché object pushed himself in front of every mobile phone raised to take pictures and beamed, another documented the event very seriously himself with an SLR camera.

Later in the day at the panel discussion in the venue, David Codling from the UK would say, “Perhaps we should take all the politicians and foundation directors to a place where they cannot listen to music, read a book, or watch a movie for four weeks. And after that we simply ask them again how important they think the promotion of art and culture in politically vulnerable countries is.”