"The Theatre of Carola Neher’s Life"
Death in Exile

A German émigré trapped between two ideological extremes. The exhibition The Theatre of Carola Neher’s Life opened at the Moscow branch of the international human rights organisation Memorial in December. The show, supported by the Goethe-Institut Moscow as general partner, illuminates both the light and darker sides of the life of an outstanding stage actress of the Weimar Republic.

In the early 1920s, a young woman from a good Munich family runs away from home, quits her steady job at a bank to rise to be one of the most celebrated actresses of the Weimar Republic. During her brief ten-year career, she interprets countless roles, becomes Bertolt Brecht’s performer of choice and takes European stages by storm. Her likeness adorns the covers of fashion magazines and cigarette cards. Carola Neher boxes, drives a car, climbs Berlin’s radio tower, thus symbolising a new, independent, emancipated understanding of womanhood. 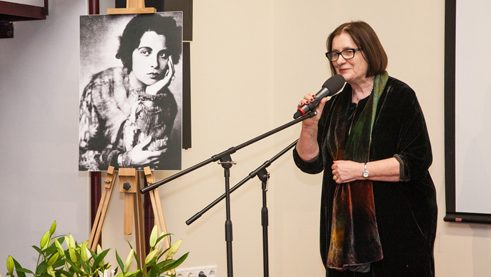 The first exhibition section, designed all in white, features photographs, newspaper clippings and biographical material that illustrate Neher’s adolescent years and her rapid rise as a celebrated stage star in the 1920s. G. W. Pabst’s adaptation of Brecht’s Threepenny Opera (1931) with her playing the role of Polly Peachum can also be seen here. But then, the walls and floors turn black: Carola Neher’s life changes abruptly when the staunch Marxist falls in love with the Romanian communist Anatol Becker and moves to Moscow with him. At that time, many western leftists saw the Soviet Union as the last bulwark of communism. But their romantic expectations are disappointed: food is being rationed even in Moscow, hunger is raging all over the country; only the nomenklatura can afford a “normal” life. In 1934, Neher, together with writers such as Lion Feuchtwanger and Heinrich Mann, signs a manifesto against the annexation of the Saar region by Hitler’s Germany. As all other signatories, her German citizenship is then taken away. Since she does not own a Soviet passport, Carola Neher is suddenly stateless. 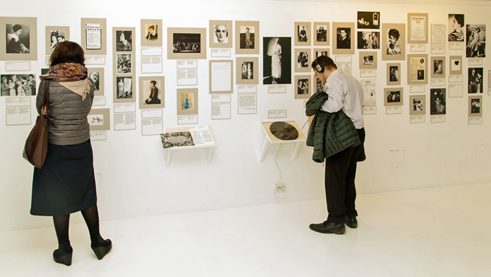 The exhibition shows not just pictures of the actress, but also sound recordings from the private archive of Neher’s son Georg Becker. | Photo: Michail Konchits/Memorial

Neher desperately seeks acting work, keeping afloat with concerts and radio broadcasts for the German diaspora. In 1936, she is arrested together with Anatol Becker on suspicion of Trotskyist conspiracy. Soon after, the first Moscow show trial heralds the Great Purges. In 1937, Anatol Becker is shot and Neher is sentenced to ten years in prison. On 26 June 1942, she dies of typhus in the transit prison of Sol-Ilezk in the Southern Urals. Until the end, she keeps fit with gymnastics, recites poetry and writes letters on pieces of newspaper. Most of all, she seeks to discover the whereabouts of her son Georg, born in 1934.

The fact that the life story of the repression victim Carola Neher is so well-known today is largely due to the dedication of her son. Georg Becker, who grew up in a Soviet orphanage, only learned of his parents’ identities following the death of Stalin. In 1959, he received a rehabilitation certificate for his mother. Thanks to the support of Lew Kopelew, Heinrich Böll and other German luminaries from politics and the arts, he was able to travel to West Germany in the 1970s. For more than thirty years, he collected any information he could find about his parents and the people around them. This abundance of materials enables visitors to the Carola Neher exhibition to take a journey from the heyday of the Weimar Republic to the cells of the Soviet penal camps.

In addition to clippings from German and Soviet newspapers of the 1920s and 1930s, the exhibition also includes letters and poems by Bertolt Brecht. The intertwined private and public history thus becomes directly tangible to the visitors. At the end of the exhibition, however, only official documents are able to “report” on Carola Neher’s final days.

The exhibition The Theatre of Carola Neher’s Life can be seen until 17 June 2018 at the Moscow branch of the human rights organisation Memorial. Admission is free. The show, supported by the Goethe-Institut Moscow as general partner, was curated by Irina Shcherbakova, who was awarded a Goethe Medal in 2017, and by Maria Shilova; Kirill Ass and Nadeshda Korbut designed the exhibition architecture, Igor Gurovich the graphic design.